NATO fielded the most hulking fighter against the Russian "Sukhi" 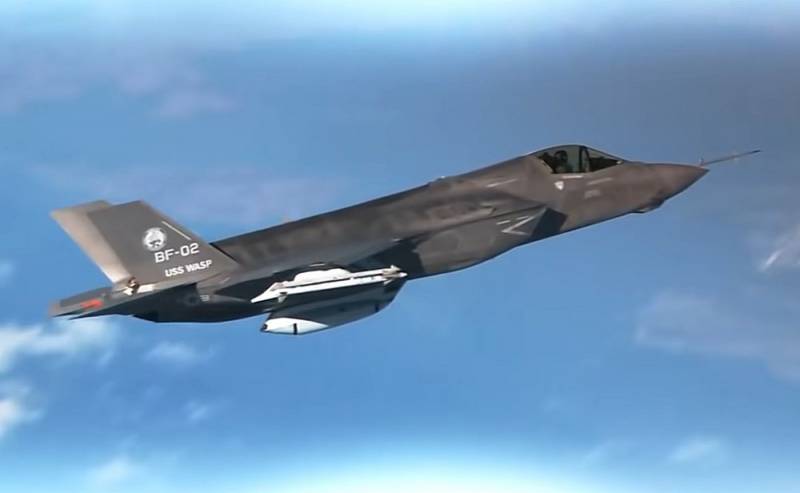 A few days ago, two fighters, an American-made F-35A and a Russian Su-30SM, converged in the skies over the Baltic. Naturally, no one fired at anyone or shot down, because the "Westerners" and "patriots" differed in their assessments of what had happened.


Here is how it was. The Italian Air Force F-35A fighter, based in Estonia at the Amari airfield, attempted a so-called interception as part of the NATO air police function. For some reason, he was going to intercept the An-12 aircraft of the Ministry of Defense of the Russian Federation, which was flying from the mainland of Russia to the territory of the Kaliningrad region. In view of the isolation of this exclave, it is possible to reach it either through the airspace of the countries belonging to the North Atlantic Alliance, or over the neutral waters of the Baltic Sea. Note that the Russian planes flew just in the no-man's sky, not touching anyone or violating anything, but for some reason they became the object of attention for the Italian NATO fighter, which tried to intercept. Let's walk through the definitions used in aviation.

Interception is the approach of an air defense aircraft (interceptor aircraft) to an intruder aircraft in order to identify it, instruct its crew to violate and then withdraw the intruder outside the restricted area or escort to the nearest landing aerodrome.
Forgive me, please, but what exactly did the An-12 violate in order to need to be "intercepted"? In fact, it is the military aviation of the NATO bloc that behaves provocatively, showing inappropriate "prowess" in relation to the Russian Aerospace Forces. So, in 2019, in the skies over the Baltic, Russian fighters had to drive off the F-18 of the North Atlantic Alliance from the plane, on board which was, for a minute, personally the Minister of Defense of the Russian Federation Sergei Shoigu, one of the three people in the country who have the right to control the "red button ". What then, what now the impudent ones had to be driven away by our fighters. The Russian Su-30SM caught up with the F-35A, followed next to it at an ultra-short distance, and then demonstrated a suspension on which weapons were adorned. After that, the "NATO member" withdrew.

Let's call a spade a spade: in this case, the moral victory in this bloodless battle was for our plane. The Russian side did not violate anything, the F-35A could not "intercept" by definition, but the Su-30SM did it quite successfully, driving the provocateur away from the An-12.

Go ahead. "Americanophiles" and other accomplices of an aggressive foreign policy The US is singing an ode to the fantastic capabilities of the F-35A. For them, this fifth generation fighter is the most massive, the most "invisible", the most powerful and smashing. True, numerous shoals in its design have not yet been completely eliminated, and the Pentagon has taken a break from purchasing new fighters of this model and intends to purchase 12 F-15EX fighters from a competitor. Okay, God bless him, with this F-35A, he can still perform certain tasks. For example, to demonstrate the power of the American military-industrial complex and the ability to actively promote their goods. The problem is different. The fact is that in the situation we are considering, a fifth-generation fighter would have almost no chance against a fourth-generation fighter of the previous generation. And these are not empty statements.

Despite its venerable age, the Su-30SM is a very serious multi-role fighter of the 4+ generation, created to gain air supremacy. It is capable of operating night and day, in any weather, in conditions of active and passive interference, to gain air supremacy, destroying enemy fighters and cruise missiles, surface ships and ground targets. Its huge advantage is its super-maneuverability, due to the design features and the location of the power plants. The combat load of the aircraft can reach 8 tons. In 2015, the Indian Air Force defeated the fourth generation Eurofighter FGR30 Typhoon of the British Air Force during the joint Exercise Indradhanush IV exercise on Su-4MKI fighters. Thanks to the super-maneuverability mode, in close combat, the royal pilots could not oppose anything to a Russian-made aircraft at close range. It got to the point that one Su-30MKI conditionally destroyed two Britons at once.

True, after the British haughtily grumbled that the former colony didn’t know what it was imagining. Well, let it be on their conscience. The superiority of the Russian fighter in super-maneuverability is undeniable, while even the fifth-generation F-35A aircraft is inferior to it in terms of speed and thrust, moreover, ours is armed with longer-range missiles. In fact, at a short distance, the "American" there, over the Baltic, simply would not have had a chance.

Note that the Su-30SM can further improve its tactical and technical characteristics. The RF Ministry of Defense has decided to unify the Su-30SM and Su-35S as much as possible within the framework of the SM2 "Super-Sukhoi" program. From the Su-35S, the younger brother will receive a more powerful engine, a more powerful onboard radar "Irbis", as well as enhanced weapons, including hypersonic missiles. The capabilities of the Su-30SM2 will increase dramatically after such an upgrade. Note that analysts of the National Interest have already tried to simulate the collision of their F-35 with our Su-35 and noted the good chances of the Russian fighter due to its super-maneuverability. And according to this indicator, the modernized Su-30SM will now equal it.
Ctrl Enter
Noticed oshЫbku Highlight text and press. Ctrl + Enter
We are
Space shield of the Motherland: the West is not in vain afraid of Russian inspector satellites
New weapons on the way: What is known about the anti-satellite complex "Burevestnik"
Reporterin Yandex News
Read Reporterin Google News
11 comments
Information
Dear reader, to leave comments on the publication, you must sign in.