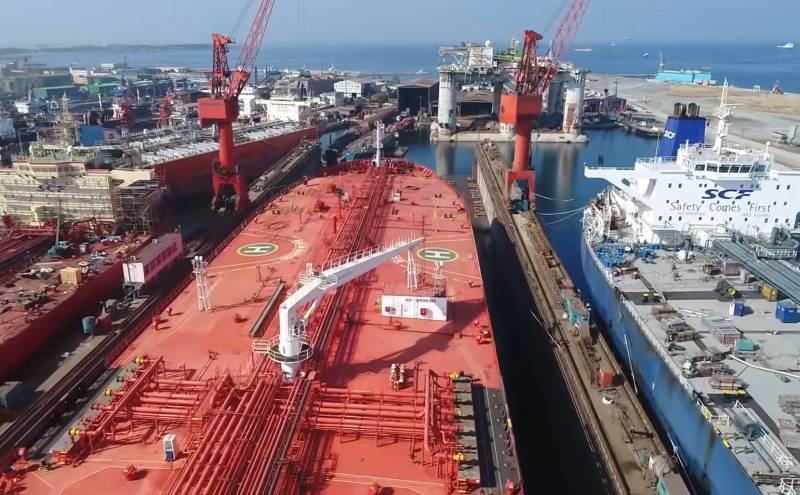 The story of the transfer of the order for the construction of floating docks for the newest Russian nuclear icebreakers to Turkey made a lot of noise. Placing orders with foreign shipyards is a completely normal world practice, but why was the young and inexperienced Turkish shipyard Kyzey Star Shipyard chosen, given the difficult relations between Moscow and Ankara? Will it not work out in the end, as with the Mistrals?


In fact, this story has several dimensions and is very revealing. The Russian Atomflot needs floating docks for the icebreakers under construction of the LK-60 project. At one time, a variant with the PD-50 was considered, but, as you know, it sank, almost dragging our last aircraft carrier, Admiral Kuznetsov, to the bottom with it. Initially, Russian shipyards were supposed to take part in the construction tender: the Kerch Zaliv, the Far East Zvezda and the Baltic Shipyard. The favorite was the Crimean shipyard, from where the dock was to be towed to Murmansk or delivered, having previously disassembled into large parts. The construction period was estimated at 29 months, and the contract value was 8,5 billion rubles. Alas, this amount seemed too high to the customer, and the domestic shipyards were too busy, so the first tender did not take place.

The most interesting thing started further. The second tender was attended by foreign contractors who were ready to provide the best conditions. These were the Turkish Kyzey Star Shipyard (which offered a price of 4,981 billion rubles) and Epic Denizcilik ve Gemi Insaat AS (4,45 billion rubles), as well as the Chinese Jiangsu Dajin Heavy Industry Co. LTD. (4,57 billion rubles). Despite the more favorable offers, the commission from the customer did not allow the last two companies, but made a choice in favor of the young Kyzey shipyard, which was de facto created several years ago from scratch specifically for Russian orders. Let us recall that in fact its work started with the construction of two ferries for FSUE "Rosmorport". Quite unusual, isn't it? However, if you wish, you can find in the public domain a lot of information that the Turkish shipyard is affiliated with the already former Russian Deputy Minister of Transport and ex-head of Rosmorrechflot Viktor Olersky, which can explain a lot. We will return to this question later.

Here we propose to make a small digression. Yes, the domestic shipbuilding industry has been in a state of extreme decline for many years, but now it is rapidly reviving. Yes, Russian shipyards are packed with orders for many years ahead, and there is no free capacity for them. Yes, paying 4,981 billion rubles for floating docks is clearly more profitable than spending 8,5 billion rubles for them. (True, 4,45 and 4,57 billion still looks more attractive). Yes, it is quite normal practice to order ships abroad. For Russian customers, shipyards operate in South Korea, China, France and Turkey. But something else worries in this matter. Why is it much more expensive and longer to build ships in Russia than abroad?

For example, the South Korean shipyard Hyundai Heavy Industries (HHI) built Aframax tankers for the Primorsky Shipping Company (PRISCO). Shipbuilding company Samsung Heavy Industries Co. fulfilled an order for us for the construction of semi-submersible drilling platforms. The Chinese shipyard Honguang has built 10 sea-going vessels for OJSC Volgo-Baltic Company. At the same time, the head of this Russian company noted that construction in China is 1,5 times cheaper than a similar vessel in Russia, despite the presence of preferences from the state. Note that the launch times at foreign shipyards are much shorter than ours. Where does such a significant difference come from? Of course, there is a difference in the cost of materials and equipment, for example, now due to the rise in metal prices in our country, the cost of production will also increase. A significant part of the equipment still has to be imported from abroad, purchasing it for foreign currency. But the rest of the savings is formed on the efficiency in organizing the work of the shipyard itself, the use of modern of technologies and the cost of a person-hour. According to these indicators, in terms of labor productivity, our enterprises are much inferior to their competitors.

So, what do we have in the bottom line. Russia has relied on the revival of domestic shipbuilding, but our shipyards are now packed with orders for years to come, and their efficiency is lower than abroad. At the same time, there is a serious dependence on imported components and technologies. It is, of course, possible to order ships abroad, but do not forget that the almost finished Mistrals remained in France and were not handed over to the customer. Obviously, it is necessary to invest not so much in the purchase of new ships as in the opening of new shipyards equipped with the most modern equipment. This will give the country additional high-paying jobs, sources of tax revenue for the budget and production facilities here at home. And here I would like to give the floor to the former Deputy Minister of Transport Viktor Olersky, when the state official answered in an interview with his interlocutor to the question of whether the creation of new shipbuilding industries in Russia was being discussed:

New production in shipbuilding is a very capacious thing, the importance of which can hardly be overestimated. A good shipyard costs several billion dollars and is built to order. Today, probably, there is no investor who could be interested in this, because it is very difficult to assess a potential order. I would compare shipbuilders to the heroes of socialist labor. First you tidy up the shipyard, then you grow the team, but at the same time you run after orders. Even if the shipyard is created, you are still doomed to be in a situation of constant search for orders. Still, shipbuilding is always a customer's market.
And what do we see? We have a bunch of multi-billion dollar orders, but for some reason they go to Turkey, where a new Kyzey Star Shipyard is being built from scratch for them, presumably affiliated with a former state husband who had the ability to make decisions and lobby for his commercial interests. Perhaps, after all, it is worth opening new production facilities in our country, and not on the territory of a principled geopolitical enemy?
Ctrl Enter
Noticed oshЫbku Highlight text and press. Ctrl + Enter
We are
US Global Economy: An End That Sneaks Noticeably
Far Eastern Zvezda: Why is Rosneft Building a Super Shipyard?
Reporterin Yandex News
Read Reporterin Google News
9 comments
Information
Dear reader, to leave comments on the publication, you must sign in.