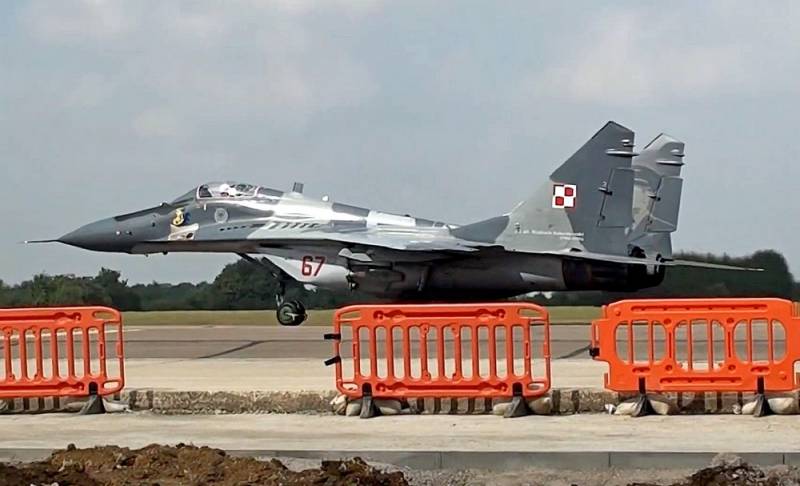 The last days turned out to be rich in incidents with MiG-29 fighters: either one plane will disappear from radar over the Black Sea, then another will receive “friendly fire” from an aircraft cannon on the fuselage during exercises. The most remarkable thing in all this is that these Soviet-made fighters are in the service of the NATO countries, and for some reason they are in no hurry to abandon them.


In the first case we mentioned, the MiG-29 of the Bulgarian Air Force crashed. During the exercises of the North Atlantic Alliance called "Shabla-21" on June 9, communication with the plane was lost, and it disappeared from radar over the Black Sea. In connection with the emergency, maneuvers were suspended, searches for the fallen fighter are underway. The second case occurred in Poland much earlier, on May 14, but the media reported about it only now. According to the Onet publication, during the exercise, one of the MiG-29 pilots mistakenly fired at his comrade in the same aircraft. Despite the fact that the fighter got out of a 30 mm cannon, he was able to land safely, and his pilot was not injured. However, the Polish military department does not officially confirm this information. The state commission is investigating the circumstances of the damage to the combat aircraft.

The MiG-29 is a fourth-generation Soviet-made multipurpose fighter. The MiG-29 is a reliable and proven light frontline fighter. It is in service in many countries - in addition to Russia, Ukraine, Belarus, Kazakhstan, Azerbaijan, Syria, Iran, India, Serbia, North Korea, Egypt, Yemen and others. In particular, they are also part of the air forces of Bulgaria and Poland, where they ended up thanks to their participation in the Warsaw Pact. Today, after the collapse of the socialist bloc and the accession of these countries to the European Union and NATO, Sofia and Warsaw demonstrate two opposite approaches to the use of their inherited Soviet equipment.

It should be noted that the Air Force of the countries of Eastern Europe is a bizarre mixture of images of Soviet and Western aircraft. For example, in Bulgaria until 2015, the ancient third-generation fighters MiG-21 survived, which were later removed from service and sold to the Romanians. Also, the Air Force of this country is armed with 12 MiG-29 and 4 training MiG-29 UB, 14 attack aircraft Su-25UK and Su-25UBK. Military transport aviation is represented by a combined hodgepodge of Soviet, French, Czech, Italian and Swiss-made aircraft. 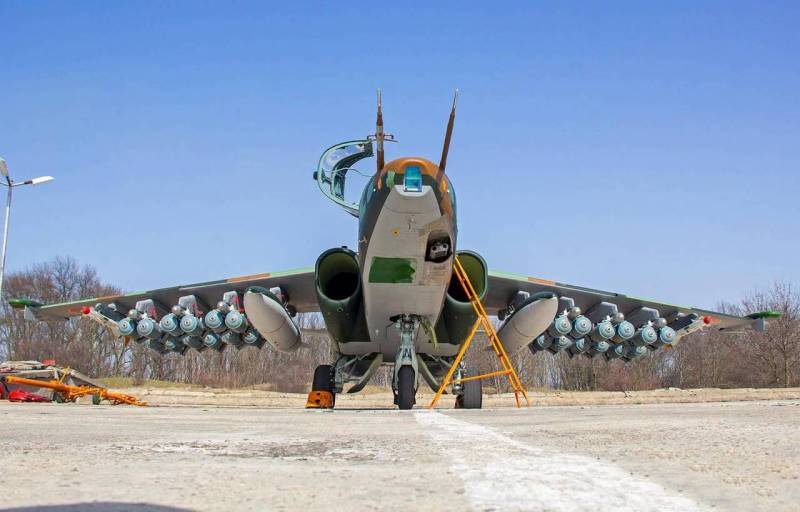 Su-25 attack aircraft of the Bulgarian Air Force
It is clear that Sofia's capital dependence on Soviet / Russian technology causes great displeasure in the NATO leadership. There was an interesting story with the Su-25 attack aircraft. For political reasons, the Bulgarians avoided asking Moscow for help in repairing older aircraft, so they had to deal with Minsk. Su-25s were sent for modernization to the 558th Aviation Repair Plant in Baranovichi. And then, until the last moment, the country's authorities were afraid to deal with Belarus because of the risk of falling under secondary EU sanctions. I wonder how Bulgaria will get out now that Batka has fallen into isolation from the West?

Sofia's main problem, if we call a spade a spade, is her poverty. Perhaps the Bulgarians would not mind transferring to American planes, but they simply cannot afford it. For example, two years ago, President Radev vetoed a deal to acquire F-16 fighters worth 1,256 billion euros, which were supposed to replace our MiG-29s. The formal reason for this was that guarantees and post-warranty service were not clearly spelled out in the contract. In reality, eight F-16 Block 70/72 would have cost Bulgaria too much. American businessmen sold a fourth-generation fighter to their Eastern European ally at the price of a fifth-generation F-35 fighter, while imposing a lot of additional paid services on it. The country's leadership turned out to be smarter and refused such a business proposal.

The bottom line is that it is more profitable for Bulgaria to continue to exploit the old, but reliable Soviet equipment to the stop. However, the deterioration of EU relations with Russia, and now also with Belarus, calls into question the prospects of its military aircraft.


To replace the MiG-29 and Su-22, Warsaw intends to purchase the American F-35 multirole fighters of the fifth generation. At the same time, representatives of the Polish opposition expressed dissatisfaction with the high price of the contract, which amounts to $ 4,6 billion for 32 aircraft. In their opinion, the price for the allies in Eastern Europe could be more comfortable. What choice wears political character, Prime Minister Mateusz Morawiecki confirmed:

This means that the shadow of Russian domination in this part of Europe, which we got rid of 30 years ago, has moved further away from Poland.
Note that while Poland is still in no hurry to get rid of age-old, but reliable Soviet fighters. After the scandalous story of the arrest of Protasevich, the Belarusian aircraft factories will most likely be closed for the repair of Polish MiG-29s, but Warsaw is quite coping with the forces of its aircraft company No. 2 (Wojskowe Zaklady Lomicze 2, Bydgoszcz), which received a contract for the modernization and extension of their operation until at least 2028. The flight simulator for Soviet fighter pilots was supplied by the Polish company KenBIT Koenig i Wspolnicy Spolka Jawna.

Thus, Warsaw, unlike Sofia, does not spare funds for the renewal of its air forces, and therefore the final replacement of Soviet aircraft with American ones will gradually take place in them.
Ctrl Enter
Noticed oshЫbku Highlight text and press. Ctrl + Enter
We are
Space shield of the Motherland: the West is not in vain afraid of Russian inspector satellites
New weapons on the way: What is known about the anti-satellite complex "Burevestnik"
Reporterin Yandex News
Read Reporterin Google News
2 comments
Information
Dear reader, to leave comments on the publication, you must sign in.