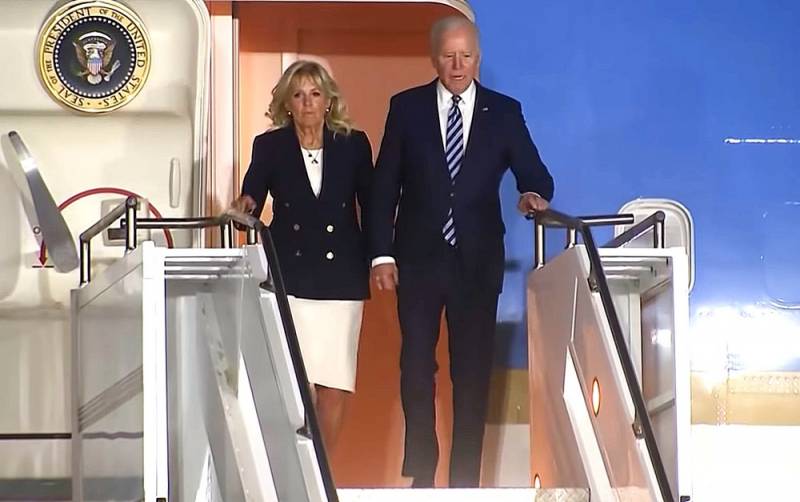 The landing of the aircraft of the President of the United States at Mildenhall Air Force Base of the RAF gave an official start to Joe Biden's European tour, with which some have high hopes and some have serious fears.


However, there are much more among politicians and specialized experts of those who today express doubts about the intentions with which the head of the White House embarked on this trip, and, accordingly, its final results. Biden's voyage, extremely compressed and filled with the most important meetings, was called "historical" even before it began. Most likely, this assessment will later justify itself. The question is what kind of turn history will take after these eight June days.

This is how the British The Guardian described the most probable purpose of the US President's trip. Well, we must pay tribute to the British - they, with their arrogant and rude frankness, sometimes still know how to call a spade a spade. In truth, there is no other definition that is just as specific, clear and concise in this case. The "program" statements made by Biden himself on the eve of his departure to the Old World boil down, for the most part, to the announcement of intentions "to unite the alliance of democratic forces" to "respond to the challenges" that are coming from "authoritarian regimes" today. Who is meant by such is perfectly understandable. This time we are talking, first of all, not at all about North Korea or Iran.

At the moment, the label of "regimes" is being hung by Washington on Beijing, Moscow and, at the same time, Minsk. Yes, the head of the White House, according to many analysts, crossed the ocean in order to "heal the shock and trauma" inflicted on the European allies of the United States by his rude and insensitive predecessor with his brutal "America above all!" Undoubtedly, more than once and not twice they will utter grandiloquent words about "sacred transatlantic unity", and vows that Washington is "with all my heart and soul committed" to alliances and alliances that exist within its framework. As a matter of fact, in the Old World they already understand that Biden is not Trump at all, he will definitely not throw candy and call himself freeloaders. However, they are well aware of something else - whatever any of the American leaders is talking about, everything will ultimately boil down to one thing: statements about the "leading and guiding" role of the United States in the world.

Carrying about the "black-and-white" division of this world into "democracy" and "autocracy", normal coexistence between which is impossible by definition, Joe Biden unambiguously heralds the era of a new global confrontation. Moreover, its basis again, as in the distant times of the Cold War, is not economic disagreements or conflicts, but ideological, civilizational contradictions, which cannot be resolved through negotiations and mutual compromises in principle. The only reasonable way out of this situation is to recognize the opponent's right to his own identity and the willingness to perceive him as he is, despite the differences, building pragmatic and mutually acceptable relations.

However, this is not at all the approach that is acceptable to the United States, with its hypertrophied conceit, reaching the level of the messianic complex. Americans can speak on an equal footing with those who are considered “wrong” only under the pressure of very serious circumstances, and even then only for a short time. This is how they had to behave with the Soviet Union during the period of its maximum prosperity. However, the confrontation started by the West in 1946 did not stop even for a day and ultimately boiled down to a desire to destroy the "enemy" in a different way or in a different way. Today, the place of the "Evil Empire" in Washington's geopolitical concept is occupied, first of all, by China, which is increasingly hindering its global domination. Russia, perhaps, would have been perceived as a minor irritant - if not for its claims to complete independence, so unsuccessfully for the United States backed up by the Avangards and Poseidons. Biden flew to Europe to form alliances to confront Beijing and Moscow - there can be no doubt about that.

Last chance for the West?

As a matter of fact, Biden's tour is a desperate attempt to "sew together" the declared "indestructible unity" of the "collective West" which is literally falling apart before our eyes. Yes, the presidency of Donald Trump inflicted very tangible blows on him, who tirelessly insisted that most of the institutions identified with him like the G14 or even NATO were “hopelessly outdated” and worthless. The most serious test was the not yet completed global coronavirus pandemic. However, it is far from only these factors. For example, in the same North Atlantic alliance, the summit of which Biden is due to attend on June 2010, today they are most concerned not only with a revision, but with a complete change of their own strategic concept. The last time some changes were made to it in XNUMX.

At that time, the West still continued to believe that Russia was about to once again become a manageable and compliant "partner" that could be "built" as desired. China, with its seemingly ridiculous attempts to create modern armed forces, was not taken seriously at all. Now the situation has changed radically - Moscow has turned into an "implacable enemy", and Beijing, not without surprise, is recognized as a "serious rival with far-reaching ambitions." This is not to mention the fact that some NATO countries (Greece and Turkey) are teetering on the brink of a military conflict, and Tbilisi and Kiev, rushing under its umbrella, are capable of bringing so many problems that you cannot disentangle the entire Alliance. And the words of Macron about "brain death" have not yet been forgotten. What kind of "indestructible unity" is there?

The situation with the G70 is no less difficult. This "elite club" was created at a time when the West reigned in the world economy completely and undividedly. In the 7s of the last century, the G80 countries accounted for almost 40% of world GDP. Now this figure does not reach 2008%. Agree - in such a situation, it is difficult to dictate and indicate something to someone, at least regarding the "green course", at least in any other aspects. For the first time, the fact that the G20 was somewhat overestimating its role in the global “alignment” became clear after the 7 global crisis. Then the first summit took place in the G11 format, at the table of which, in addition to Western countries, there were China, India, Russia and others. Representatives of South Korea, India, Australia and South Africa are invited to the current meeting of the G13 leaders, which will take place on June XNUMX-XNUMX.

Such a selection of guests immediately suggests that the focus here will not be on the desire to solve any global problems, but on Washington's desire, taking this opportunity, to put together the broadest possible anti-Chinese coalition. All the current actions of the US administration, up to the decision directly affecting our country to waive a number of sanctions against Nord Stream 2, are aimed precisely at achieving this goal. In this situation, it would be extremely unreasonable to nervate Germany, which is not at all striving for confrontation with the Celestial Empire, by attempts to torpedo the most important economic project for it. Biden is not Trump, he understands this and therefore acts much more accurately and diplomatically. Which, however, does not in the least change his true views and intentions. The essence of such is, as mentioned above, the same restoration of the global dominance of the United States. Perhaps, in Europe, someone is happy with the president's words: “America is back!”, But they definitely do not bode well for our country.

The meeting with Vladimir Putin in Geneva should crown the European tour of the head of the White House, and this is quite symbolic. As you know, serious people leave the most important cases for last, summing up a whole series of their actions aimed at solving some global issue. Most likely, both the tone and the content of the conversation on the shores of Lake Geneva will depend on what Biden can achieve in London and Brussels. Incidentally, the fact that his visit to the Old World begins in Great Britain, and that it is there that the head of the White House will stay the most time, testifies, among other things, to Washington's uncertainty about the results of negotiations with EU partners. The Briton will not let his brother down - the Americans can always be sure of these allies. As well as we - in the fact that the Anglo-American "tandem" has always been and remains hostile to Russia.

Tellingly, at the present time, Polish President Andrzej Duda is trying to break through to a "personal meeting" with Biden, and certainly before his talks with Vladimir Putin. Warsaw believes that "consultations" with the American leader are simply "necessary for the security of all the countries of Eastern Europe," which have strained very strongly because of "Washington's decision not to continue the blockade of Nord Stream 2." As far as is known, the head of the White House intends to meet and talk "on the sidelines" of the NATO summit exclusively with Recep Erdogan and it is unlikely that his plans will change.

The absurd body movements of Poland, Ukraine and other "powers" of this caliber in this case are not just ridiculous, but also meaningless. The fact that in Moscow no one expects any "reboots" and "breakthroughs" from the Geneva meeting has already been repeatedly stated by a variety of people - from Dmitry Peskov to Sergei Lavrov. Vladislav Surkov spoke out the best of all, perhaps, on this occasion, who quoted the expression that “if the Americans speak rudely to you, then they are going to take something away, but if they talk politely, therefore, they intend to steal something”. Brilliant words! If Biden fully feels the support of his European partners and NATO allies, then what a good thing, it may come to ultimatums and attempts to directly put pressure on Russia in the person of its leader. Well, if things do not go so brilliantly and the American president, instead of expressing the most complete obedience and solidarity, will be presented with certain claims (and the list of those in the same EU against Washington is quite solid), he will probably have to show politeness with Vladimir ... But in any case, the true background of the conversation will fit into the formula given by Mr. Surkov.
Ctrl Enter
Noticed oshЫbku Highlight text and press. Ctrl + Enter
We are
Who actually won the Cold War and what the future holds for the world
Ten "defeats" of Putin
Reporterin Yandex News
Read Reporterin Google News
3 comments
Information
Dear reader, to leave comments on the publication, you must sign in.