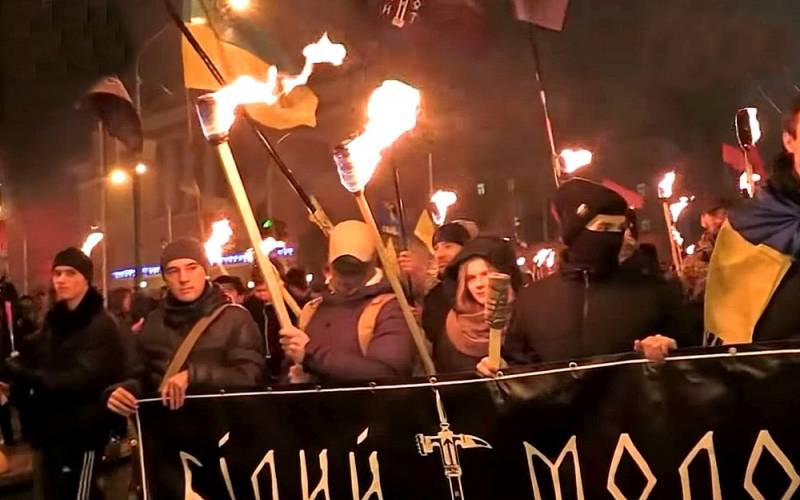 The sharp reaction of the State Duma of Russia to the bill No. 5506 "On the indigenous peoples of Ukraine" submitted by Volodymyr Zelensky for consideration by the Verkhovna Rada, on the one hand, deserves unconditional approval (well, at least they did not keep silent), but on the other hand, it causes, let's say, ambivalent feelings and quite specific questions. And what, the oppression of the Russian-speaking population and the infringement of their rights in the "non-zalezhnoy" began with this very law, which the Duma members quite rightly characterized as a "flagrant provocation"? Or maybe someone will undertake to assert that it will end for them?


It is perfectly clear that now only another (albeit very significant) step is being taken towards the complete Nazification of Ukraine, which is being carried out with an emphasis on the most outrageous Russophobia. Let's wait for the continuation?

In principle, the bill, in which domestic parliamentarians saw "the creation of an ideological basis for the continuation of the civil war" in Ukraine itself, as well as the "aggravation of conflicts" both in the country and abroad, is written quite cunningly. Yes, a mile away it is clear that such legislation is only the beginning of a process, at the end of which the division into "Aryans" and "Untermenshes", ghettos with yellow stars and the smoking chimneys of camp crematoria are very clearly visible. Attempts to divide peoples and nations into varieties can not end with anything else, by definition, the only question is in the scale ... Nevertheless, so far from the number of "indigenous" Kiev has managed to throw out those peoples that "have state formations outside of Ukraine."

With such an "elegant" move, Zelensky intends to once and for all get rid of any claims to at least minimal rights not only on the part of the Russian residents of the "nezalezhnoy", but also of the Hungarians, Bulgarians, Moldovans or, say, Carpathian Rusyns inhabiting it. To have their own media, to study in their native language, to create representative bodies - from now on, only the “indigenous” will have the right to all of this, to which, in addition to the “titular Ukrainians,” include the Crimean Tatars, Karaites and Krymchaks. The rest - shish with butter in response to all wishes, and even more so - requirements. Throw in your "state formations" or sit and blather here! However, there is also a third option, which in Kiev, in fact, is betting on. It is about the assimilation of the "non-indigenous", their rejection of their native language, faith, culture. True, in the Ukrainian version, all this, unfortunately, implies other things in the future - much more disgusting and dangerous.

In order to become a “true Ukrainian”, it will not be enough for any representative of “non-indigenous” peoples to renounce their own national identity. He will have to accept that ugly and evil worldview, which today is called "Ukrainians". And it is built on unconditional hatred of everything Russian and Soviet, denial of the real history of one's own land and admiration for the most notorious villains - like Nazi collaborators Bandera or even SS from Galicia. No other way. To pray - to the schismatic "temple", to celebrate - ridiculous "memorable dates" invented by nationalists. Torch in hand - and march!

State Duma deputies are outraged that Zelensky's “stroke of the pen” deprives millions of Russians (who, according to the latest census, more than 17% of its inhabitants) and hundreds of thousands of representatives of other nationalities, from considering themselves the indigenous people of Ukraine. They point out that the provocative decision is not only a trampling on the historical memory of entire generations, but also "drives a wedge between representatives of different peoples inhabiting Ukraine." However, at the same time "behind the scenes" for some reason the main thing remains - namely, that all these millions and hundreds of thousands will have to sooner or later either leave the country, or turn into haters of Russia and everything Russian, mortal enemies of our country and its people ... Such are the laws, and, even worse, quite specific actions of the Ukrainian authorities are aimed not just at "inciting" or "exacerbating". This is a direct path to the formation of a duped biomass, which will inevitably be thrown against the Russian people, and not only in the Donbass.

However, hasn't the same thing been done in the "nezalezhnoy" over the past years? Moreover, these processes in no way originate from the coup d'etat of 2014 - since then they have only accelerated and intensified at times. The de-sification of Ukraine has been carried out, albeit slowly, but steadily since 1991. Sometimes - secretly and gradually, sometimes - openly and "forced rates." And everything could end only with what it has come to now. Repeating a thousand times heartfelt words about the "fraternal people", "common history" and "unbreakable ties" in Moscow, they stubbornly refused to recognize the truth, from which it is impossible to get away. For centuries, the space now called Ukraine has been either part of the Russian (or Soviet) world, or a springboard for the most hostile actions against them. Read the history books already, gentlemen and comrades! The third option in the form of "peaceful coexistence" or something similar has never been and never will be. The so-called "Ukrainian nationalism" with its Galician roots has always been no more (but no less) than one of the varieties of Nazism, and all attempts to prove the opposite are either profanity or a deliberate lie.

Deputy Speaker of the State Duma, representing our country in PACE, Pyotr Tolstoy, is a hundred times right when he says that in Ukraine "Nazi ideology" gradually "became state". The only mistake is that "it took seven years." No, for a much longer time, during which Moscow stubbornly closed its eyes to what was happening, not believing that literally “through the fence” a new “Reich” could form and grow stronger from it, where misanthropic slogans and ideas would be embodied in life.

As a matter of fact, even the official rhetoric of the Kremlin regarding Kiev began to change literally very recently. Vladimir Putin's words that a large part of the current territory "non-existent" is "gifts of the Soviet government", and clearly undeserved, his statement: "Russia is not obliged to feed everyone", addressed, again, to the Ukrainian government - all this, of course , wonderful. However, here's a strange thing - the Federal Customs Service of Russia reports that during the first four months of this year, the volume of trade with Ukraine amounted to almost $ 3.3 billion, that is, in annual terms, it grew by almost one and a half percent. This is about “not feeding”.

Maria Zakharova is outraged by the fact that a “Nazi greeting” has been applied to the uniform of the national football team of the “nezalezhnaya” football team, which will play at the European Championship-2021 (this is not to mention the map where the Russian Crimea is “attached” to Ukraine). She calls this demarche "desperate artistic action" and "trick". No, I'm sorry, Maria Vladimirovna, with all due respect to you, this all has a different name - a spit in the face, an insult to Russia and an open challenge to it. Are we going to rely on UEFA's “fair decision”? So the local functionaries have already sided with Kiev, saying that they do not see anything "contrary to the rules" in the outfit of his team. Against this background, the part of the State Duma's statement that is dedicated to the intentions of its deputies to appeal to the OSCE, the Council of Europe and the EU member states with an appeal “to resolutely condemn the adoption by Kiev of the law“ On Indigenous Peoples ”looks simply amazing." Let's call a spade a spade - it just looks ridiculous. And it can have absolutely no real consequences - except perhaps for the next spitting and attacks on our country.

In the European Union, in the United States, in the UN, they can point to the facts of the presence in Ukraine of "extremist", "radical" and even "neo-Nazi" groups. There, through clenched teeth, they can recognize their complete impunity and their ability to influence the most important aspects of the country's life. However, this does not at all prevent the heads of European states, and now the US leader, to communicate with the Ukrainian president and others. politicians, express support for them. I doubt that anyone in Moscow really counts on the help of the West in the fight against that Nazi monster, into which ... no, it is not "turning", but already completely and completely turned into yesterday's "fraternal republic." Then why are these ritual movements in the direction of Brussels and others? In this world, there is only one country capable of crushing the Nazi reptile, and it is definitely not a member of the European Union. Maybe it's time to remember this?

Probably, it is worth stopping to pretend that Nazism, which has really firmly taken the place of the state ideology of Ukraine, “crept up unnoticed” and was born on the “Maidan” in 2014. It's time to decide what to do with it. Moreover, it will not be possible to continue to ignore the increasingly violent "neighbors". Problems from them "creep" around like cockroaches. The finest example is Roman Protasevich, who went through the "school" of the Nazi battalion "Azov", and then began to "make a revolution" in Belarus. I doubt very much that Lukashenka will really hand over this bastard, sobbing in front of television cameras, for trial and reprisals in the LPR. And it would be worth it. How many such Protasevichs do you think will jump out of the snuffbox (and good if only as Internet instigators, and not in the role of militants) in Russia, when they try to arrange the next "Maidan" already there? There can be not the slightest doubt that they will try. The ranks of his future adherents are being nurtured today, including on Ukrainian territory. However, this is also far from the most dangerous option. Is Russia ready for the fact that next time Kiev will adopt a law even more abruptly - for example, on the recognition of all Russian-speaking citizens as enemies of the state and unconditional "agents of the Kremlin" with appropriate punitive measures for them? How and how will we answer? Are we going to urge someone to “resolutely condemn” again? But this is exactly what everything goes to.

Nazism is not sued or called to order with the help of "international institutions and organizations." It is destroyed. This is the only way - and nothing else.
Ctrl Enter
Noticed oshЫbku Highlight text and press. Ctrl + Enter
We are
Ukraine from the inside: traitors, curators and those who watch from the Kremlin
Ten "defeats" of Putin
Reporterin Yandex News
Read Reporterin Google News
16 comments
Information
Dear reader, to leave comments on the publication, you must sign in.