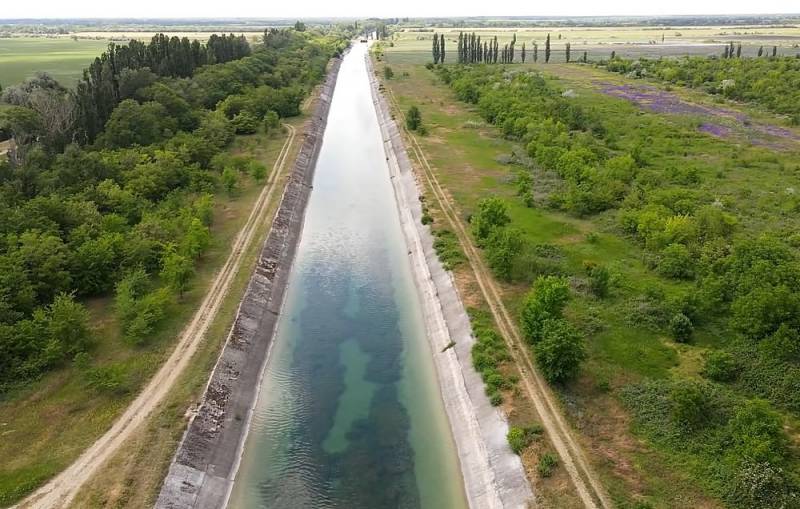 Recently, the long-term problem with the water supply of the Crimea was almost resolved by itself. A self-made dam, built in 2014 to block supplies through the North Crimean Canal, gave a leak, and the Dnieper water rushed to the second dam, which has not yet been completed and has not been officially accepted for operation. A little more, and the peninsula will get what it wants against the wishes of the Maidan authorities of Ukraine. However, the Crimean authorities suddenly began to turn up their nose from the water from the Dnieper. What is more in this, political coquetry or real fears before the muddy water from Nezalezhnaya?


Recall that before the Maidan, the peninsula received up to 85% of its water through the North Crimean Canal. Basically, it was used for irrigation, so the shutdown of supplies in 2014 dealt a severe blow to the agriculture of the peninsula. Rice farming, for example, was destroyed as such. The regional authorities tried to solve the problem by digging artesian wells, but the abnormally hot and dry summer of 2020 showed that this is clearly not enough. The federal center has allocated huge funds for the construction of water intakes, new water transport infrastructure and the repair of a dilapidated one, as well as in the development of projects for desalination plants. This is all, of course, very good, but in reality the problem of water supply to Crimea will not be solved soon, it will take several years for residents and guests of the peninsula, the resort region, by the way, to receive water not for a couple of hours a day, but to have it in tap constantly, cold and hot. And then a gift from heaven: water itself knocks on the walls of the unfinished dam. One hit "Tochka-U" and ...

But no, of course, no one in Russia will do anything like this. We are not Egyptians who are trying to launch a missile strike on a dam in Ethiopia that threatens to leave the land of pyramids without enough water in the Nile. The Crimean authorities cheerfully report that the problem with water supply has already been practically resolved and we no longer need any Ukrainian water. Deputy of the lower house of the Russian Parliament Andriy Kozenko generally speaks about the potential danger of water from the Dnieper:

In 2014, we had a very serious threat of chemical contamination of water <...> And even those saboteurs who were plotting this were caught. Nothing good can be expected in that water yet.
Is it really? Perhaps the truth is that nothing good will be able to flow to us from the Nezalezhnaya upstream?

Seriously, there are questions about the quality of water in the Dnieper in Ukraine itself. According to the Minister of Environmental Protection and Natural Resources Nealezhnaya Roman Abramovsky, a real trouble is happening to the great Russian river:

Significant excess in antidepressants in the Don basin, Seversky Donets. Basins of the Dnieper, upper and middle - exceeding the "covid" protocol for pharmaceuticals. Large excess for pesticides, agrochemicals. There is even mercury in fish in the Desna basins.
The Dnieper is polluted with emissions from industrial enterprises along its entire length, with salt from the roads, it grows shallow, the water begins to rot. The river gradually turns into a swamp, the current falls on it. According to the State Ecological Inspection (SEI) of Ukraine, in some places the concentration of hazardous substances in the Dnieper is 30-40 times higher than the maximum permissible norm. According to disappointing forecasts, by 2050 Kiev will have to start importing water itself. Lived.

This is due to the uncontrolled discharges of untreated waste materials. These are both hazardous chemical reagents and solid household waste. The latter, in particular, enters the Dnieper from the outlets of the Kiev sewage system, which is not equipped with filters. By settling at the bottom of the river, solid debris creates shoals where temperatures rise and create optimal conditions for the growth of blue-green algae. Two thousand car washes in the Ukrainian capital are uncontrollably pouring waste detergents containing phosphates into the sewer, which only enhances the growth of algae and leads to the constant flowering of the river and the death of fish. A study of the Dnieper River carried out by the Ministry of Environment Protection and Natural Resources showed disappointing results:

As a result of the study, 21 pollutants were identified. Of these, 19 are synthetic substances: agricultural pesticides, pharmaceuticals and a substance used in perfumery - synthetic musk. And also 2 heavy metals: zinc and copper.
Agricultural holdings that cultivate arable land along the banks with the help of pesticides and chemical fertilizers, as well as builders who are building cottage settlements for the Ukrainian "elite" in special protected zones, contribute to the destruction of the great river. By the way, over the past 25 years of "independence" due to mismanagement and corruption, the country has lost about a hundred rivers, and the rest are in a state of degradation, filled on average by 70% of the norm. Well, the cherry on top is, of course, the presence of radionuclides in the Dnieper water caused by the consequences of the long-standing radiation disaster at the Chernobyl nuclear power plant.

So, the question is, is such water needed in Crimea? The answer suggests itself, of course no. Alas, everything is a little more complicated than we would like. Ukraine drains the Dnieper water directly into the Sea of ​​Azov, simultaneously desalinating it and leading to pollution of all of the above. And all these harmful substances, in addition to our desire with you, end up on the coast of the Crimea and the Rostov region. For this reason, the question of water for the peninsula is much broader than it seems at first glance. The key problem is the "toxicity" of the Ukrainian state itself, which poisons itself and everything around. Therefore, you can't get off with desalination plants and catchments. This country needs healing.
Ctrl Enter
Noticed oshЫbku Highlight text and press. Ctrl + Enter
We are
While Kiev threatens a "water embargo", bad weather in Crimea fills empty reservoirs
Bypass plumbing: the Kremlin may send the Dnieper past Ukraine
Reporterin Yandex News
Read Reporterin Google News
17 comments
Information
Dear reader, to leave comments on the publication, you must sign in.