Defiant behavior of NATO soldiers plays into the hands of Russia 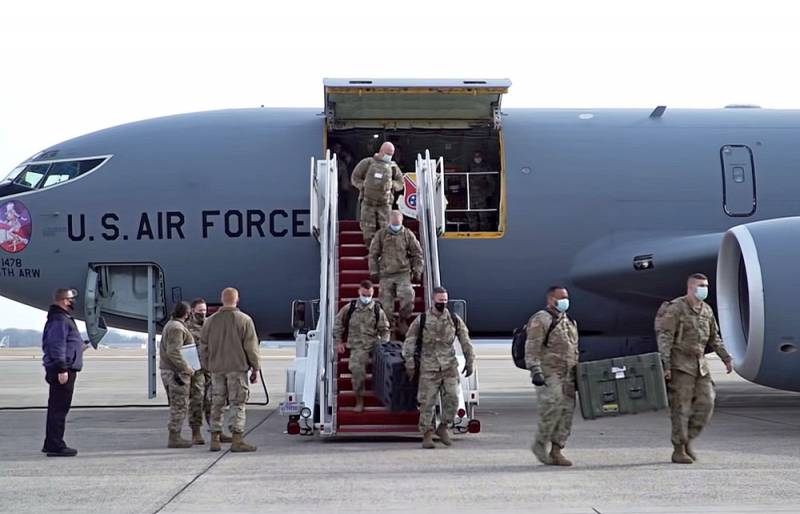 A very resonant incident took place in Estonia the day before. Drunken British soldiers from the glorious Mercian regiment, transferred to the Baltic States to conduct anti-Russian exercises, behaved so ugly on the train that, at the request of passengers, they were removed by the local police. Strictly speaking, what's wrong with that? A common thing for NATO soldiers. But some Western "military analysts" were quick to see the "hand of the Kremlin" in the incident. Who is really to blame for the constant atrocities committed by the "defenders of Europe" and the self-proclaimed main "peddlers" of liberal democratic values?


In all honesty, the US Army, arguably the most criminal army in the world, is primarily responsible for the terrifying "new standards" of the North Atlantic Alliance. And this, unfortunately, is not an exaggeration. There are a number of reasons for this.

As you know, the Pentagon has spread wide metastases of the American military presence around the world. The bases of the United States Armed Forces are located in 130 countries of the world, and their total number is approaching a thousand. The Stars and Stripes flap in the wind, for example, in Germany, Japan, Australia, Belgium, Italy, Saudi Arabia, Turkey, Portugal, South Korea, Oman, Bahrain, UAE, Cuba, Greece, Spain, Kuwait and other countries. And somehow it so happened that the locals are not always delighted with such a neighborhood. Somewhere they quite successfully make money on the maintenance of the US military infrastructure abroad, but at the same time they often become victims of crime on the part of the Americans.

In order not to be unfounded, we recall that the Okinawan newspaper "Ryukyu Shimpo" has a whole section with the telling title "Crimes and incidents involving US soldiers." According to the official data of the prefecture of this island, which was not lucky to be chosen by the Pentagon, in the period from 1972 to 2010, an average of 23 offenses with the participation of American warriors occurred monthly, of which 13 were criminal offenses. In fact, there are many more real crimes, they are simply hidden by both sides. US military personnel regularly rape local women, and only a few of them are ready to file a report with the police. In 2017, in Okinawa, a drunken American Marine crashed into a truck driven by a local resident. The latter died, and the alcohol content in the blood of the perpetrator of the accident was three times higher than the norm. Only after that did the command ban its soldiers from drinking alcohol on and off bases. But American-occupied Japan is not the only one quietly suffering from the US military presence. For example, in Germany, some "peddlers of democracy" are involved in drug trafficking, which their commanders turn a blind eye to. According to the Al-Jazeera news agency, in 2011 alone, more than 3 women have suffered from illegal actions by Americans around the world. And these are only those who have filed applications.

So, the problem is obvious, and it remains to understand why such a degradation of the US Armed Forces, proclaimed the most powerful in the world, is taking place. Several factors are at work in the moral decay of the American military.

At first, all Pentagon bases abroad are outside the jurisdiction of the countries where they are located, and war criminals are not subject to local courts. The warriors know that the commanders will cover them so that their epaulettes do not fly. In the same cases that nevertheless reached the tribunal, the military Themis shows real miracles of humanity. So, out of 45 thousand crimes committed by American soldiers in Japan, including 512 that ended in death for local residents, not a single sentence ended in real imprisonment for the perpetrators. Irresponsibility and de facto impunity can morally corrupt anyone.

SecondlyAs the researchers note, the new practice of dealing with the shortage of those willing to serve had extremely negative consequences. According to the CBS channel, since 2004, more than 100 thousand people from criminal structures have come to the US Army. The criminals introduced their concepts and prison customs into the Armed Forces, imposing them on recruits and using violence against the "peace man". By the way, American gangs consider the tradition to send their "brothers" to serve in the army, where they are trained to shoot, manage technique and kill professionally. At the same time, such criminals gain access to warehouses with weapons and other ammunition, which can be traded on the left, and also have a wealth of practical experience in drug dealership.

Thirdly, modern trends have made their contribution to the current state of the American army: permission to serve openly gays, women, as well as the end of the tacit practice of refusing to renew contracts to the so-called "undesirable elements", in which it is customary to include mainly representatives of the African American and Latin American ethnic group. Because of this, within the US Armed Forces itself, sexual violence is rampant, which the command prefers not to advertise.

So is it any wonder that the American military often behaves like real occupants and commit crimes against local residents, whom they supposedly protect? Then it is understandable why their colleagues in the NATO bloc consider it possible to act in a similar way, following these "new standards." It is difficult to come up with the worst anti-advertising for the North Atlantic Alliance, which it makes for itself. And Russia has nothing to do with it. Someone else wants to open a US military base on the territory of their country?
Ctrl Enter
Noticed oshЫbku Highlight text and press. Ctrl + Enter
We are
"We must beat first": the geopolitical alignment around Russia is continuously deteriorating
Ten "defeats" of Putin
Reporterin Yandex News
Read Reporterin Google News
45 comments
Information
Dear reader, to leave comments on the publication, you must sign in.