Zelensky's invitation to the United States: Washington sends a clear signal to Moscow 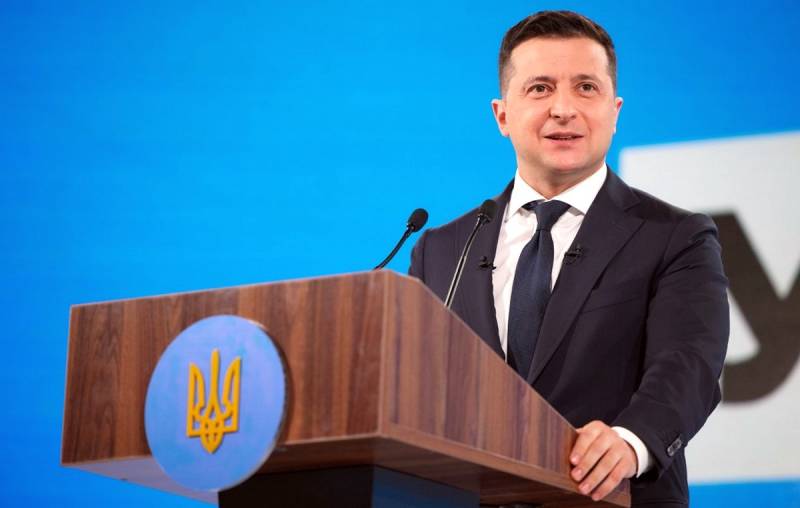 The "wave" raised by the scandalous interview of the Ukrainian president to the American publication Axios, in which he expressed a lot of harsh claims to the United States and personally to its leader, had hardly settled down in the world information field, when suddenly a new "breakthrough" occurred in Ukrainian-American relations. Joe Biden deigned to call Volodymyr Zelensky, and now in Kiev this is presented almost as a grandiose "peremogu".


The main thing is that the head of the "nezalezhnaya" company was finally awarded a personal invitation to Washington. So to speak, "before bright eyes." Was it all by chance that all this happened shortly before the world-expected meeting of the leaders of Russia and the United States in Geneva? In no case. But what could the actions of the head of the White House mean in this context? Let's try to figure it out.

Generally speaking, in the light of everything that Zelensky said in the process of communicating with American journalists, Biden's next step soon looks like a real surrender, or the desire of an adult and experienced policy to quickly suppress the very inopportune hysteria of his snotty "ward", who allowed himself a demarche in the style of "children's screaming on the lawn." And - specifically in front of the White House. So what was it really? In his interview with Axios, the Ukrainian president quite clearly and unequivocally accuses the overseas "partners" of insensitivity, indecision, and, in addition, of the "non-transparency" of the policy towards the "non-foreign" policy. Regarding Biden, he even stated about "surprise and disappointment." How is it - according to the comic president, during a telephone conversation with the head of the United States, he "received clear signals" that the Nord Stream 2 will not be completed. And now - that's how it is!

Zelenskiy, in his usual absurdly pretentious manner, calls the Russian gas pipeline "a weapon for which the US provided bullets." Obviously - by its refusal to impose further sanctions against him. In addition, the showman's subtle nature was stung by the fact that he learned about Washington's new position "like everyone else, from the press." They did not consult with him, do you understand, did not ask for a precious opinion and did not take it into account! Zelensky's words, blaming the United States that “relations between strategic allies should be transparent and direct,” can really break your belly. Found an ally ... Strategic, sorry for the expression. Further, however, there were even more abrupt passages - Ukraine, it turns out, “protects the entire civilized world”, since “sincerely believes in its values”. And with her - just like that ... Not good, Mr. Biden, oh, not good!

With no less fervor, the Ukrainian president "gritted" the American one for the fact that he "would not in any way clarify the issue of Ukraine's joining NATO." That is, translating from the Zelensk language into the human language, it will not drag the "non-zelezhnaya" into the Alliance even with a carcass, even with a stuffed animal, contrary to the opinion and position of the absolute majority of its other members. It is about this that he longs to talk with Mr. Biden, in whom he "believes as in God" and with whom he is ready to meet "at any time and anywhere in the world." Moreover, according to Zelensky, this must be done as soon as possible - after all, the fact that the White House “did not hold consultations” with Kiev before the meeting of its head with Vladimir Putin also “surprises” and upsets the Ukrainian president. I must say that the journalists of Axios, who provided their pages for all this "stream of consciousness", did not hesitate to add a comment that was quite offensive for Zelensky to its presentation.

Its essence was that in the United States, perhaps, they were going to allow him to "appear" before Joe Biden, but flatly abandoned this intention after the personnel reshuffle in Naftogaz, unacceptable for Washington, began in Kiev. And in general, the Washington administration is somehow not enthusiastic about the president's “non-existent” activities - in particular, in the field of “fighting corruption”. So - let him walk for now. They will certainly communicate with Putin without his prompting. And now - all these predictions, very similar to the truth, suddenly turned out to be mercilessly broken. Biden still called Zelensky. And he even invited me to the USA - not really, it is true, it is clear, either to visit, or "on the carpet." In Kiev, however, they argue that this was a "reconciliation of the positions of the two states before the upcoming summits" (US-EU and US-Russia), and these positions coincided literally on all points.

"Firmly uphold the sovereignty of Ukraine"

This is the promise, according to White House National Security Advisor Jake Sullivan, that Biden Zelenskiy made during a conversation between them. A ritual phrase or something more? This will only become clear on June 16 in Geneva. The most unpleasant thing is that, despite the extremely short time left before the meeting, it is still not clear whether the US president will try to negotiate at it, or whether he still intends to “pump rights” and continue “dialogue” with Moscow from a position of strength ... Alas, so far the absolute majority of signals coming from Washington are in favor of the second option. Take, for example, an interview with US Secretary of State Anthony Blinken (by the way, published the day before by the same Axios), in which the head of the State Department again threatens Russia with some "retaliatory measures" to the hypothetical "reckless or aggressive actions" taken by our country against the United States or its allies ...

Based on the context, we are talking, for the umpteenth time, about cyber attacks attributed to "Russian hackers", which they allegedly carry out almost against American meat processing plants. Not so long ago, Vladimir Putin unequivocally expressed his attitude to such accusations, calling them "ridiculous and absurd nonsense." Only in Washington, apparently, they do not think so. In principle, the tone of all the statements emanating from there regarding the upcoming summit ranges from, shall we say, “moderately optimistic” to outright aggressive. As for specific speakers, for example, the press secretary of the White House, Jen Psaki, at one of the last briefings in June, emphasized that the American president during this meeting "will not be indecisive" and does not intend to "yield to Putin in anything." ... And in general, "one should not expect from the Geneva talks a solution to all problems in US-Russian relations." Well, just a wonderful announcement!

The same Blinken in the above-mentioned interview made it clear that he harbors very little optimistic hopes regarding the upcoming negotiations. Even more outspoken was Jake Sullivan, who said that the Geneva meeting was "not a gift for Putin," but only "an element of protecting American values ​​and interests." "Significant practical results" should not be expected from her, he said, since only "verification of the intentions and capabilities" of both sides will take place. Well, and finally, Joe Biden himself not so long ago declared that he was "ready to confront Russia", although he "does not seek to conflict with her." Yes, it should be noted that all the characters listed above, voicing Washington's foreign policy position, literally unanimously repeat about "the need to have more predictable and stable relations with Moscow." But the further, the more it becomes clear that in this case we are not talking about mutual respect and equal partnership, but about absolute domination on the one hand and complete submission on the other.

I think there is no need to explain who specifically in which of these roles do the representatives of the US administration see. Anthony Blinken, for example, says bluntly that such a relationship can only come true if "Russia chooses a different course." Moreover - "will convincingly prove it by his actions." In a word, if we throw away the white flag and offer the keys to Moscow with a deep bow ... When one of the parties starts “fateful” (by the way, Biden’s words) negotiations with a similar attitude, it is hardly appropriate to expect anything positive from them. It is completely incomprehensible on what, in fact, grounds in Washington continue to believe that they can speak with our country from a position of strength, however, to all appearances, this is exactly the case.

In all fairness, it should be noted that in Moscow there is clearly no excessive enthusiasm or any bright hopes for a future meeting. Moreover, a number of statements made by domestic dignitaries indicate that no one is going to "negotiate at any cost" with the Americans. The words of the Deputy Foreign Minister of Russia about "a number of uncomfortable signals" that await the United States on the eve of the talks, the statement of the Secretary of the Security Council Nikolai Patrushev that in the future our country is considering the possibility of "taking any measures to suppress hostile actions that threaten its sovereignty", up to "Forceful methods of coercion", an unequivocal warning from Defense Minister Sergei Shoigu about a significant increase in Russia's military power in the Western direction - all this should make Washington think about whether it is worth "defending its interests" in Geneva to the detriment of Russian interests. The recent words of Vladimir Putin that the United States "with a firm step and a confident gait" is heading towards disaster indicate that he does not feel the slightest fear of the overseas "hegemon". This is at least.

Biden's call to Zelensky, in principle, may indicate the desire of the American leader to "shut the mouth" of the Ukrainian talker, so as not to weaken his own positions before the summit even more. Demonstration of discord between the "allies", and speaking frankly - the attempts of the most faithful puppet to show obstinacy will definitely not strengthen them. I would like to believe that this is exactly the case, but ...

It is possible (and even more likely) that the conversation between Washington and Kiev is in fact addressed to Moscow - as a reminder that the United States has a very reliable tool in its hands to "spoil the blood" of Russia. The conversation in Geneva will not go well - and the leader of the “nezalezhnoy” summoned for “briefing” will receive the appropriate instructions, which he will carry out with all zeal, without thinking about the consequences. And we will help him "to defend sovereignty." Keep calm! How to understand what is actually happening, we will find out very soon. Not long left.
Ctrl Enter
Noticed oshЫbku Highlight text and press. Ctrl + Enter
We are
Who actually won the Cold War and what the future holds for the world
Ten "defeats" of Putin
Reporterin Yandex News
Read Reporterin Google News
26 comments
Information
Dear reader, to leave comments on the publication, you must sign in.