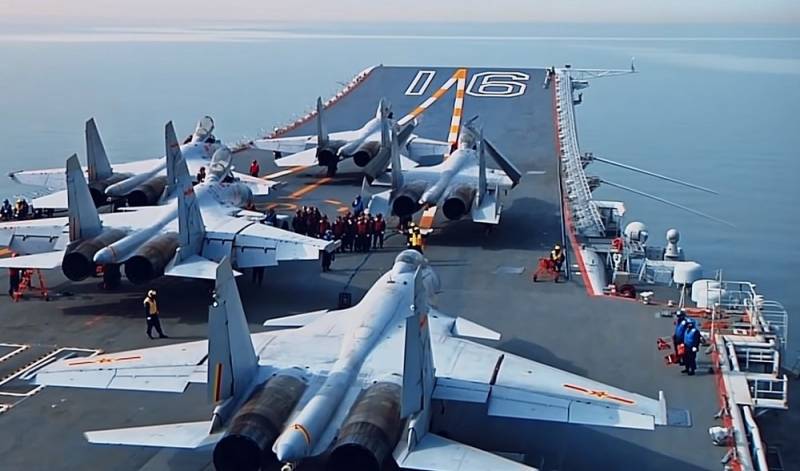 Incredible economic China's success in just a few decades may now backfire. The United States is embarking on an active phase of strangling its main competitor, for which the Americans do not hesitate to use any means. Washington's agenda is now the creation of a broad international anti-Chinese coalition and a regional war with the Celestial Empire at the hands of its neighbors.


The main industry of the PRC is located on the coast, and most of its exports go by sea. Also through the Malacca Strait, which connects the Indian and Pacific Oceans, there are ships carrying oil, LNG and other natural resources to China, which are necessary for its production sphere. By blocking the sea routes with its own navy, the United States can bring down the PRC's foreign trade and undermine its industrial potential. In order to avoid such scenarios, Beijing has long begun to implement a large-scale infrastructure project of the overland "New Silk Road", which has several directions at once, and is also actively building its own navy. Today, the Chinese Navy is already superior in strength to the American Navy in the Asia-Pacific region.

For obvious reasons, this is the most serious geopolitical challenge for the "hegemon". Washington needs to somehow besiege Beijing, but it is desirable to do it with someone else's hands, without a direct confrontation and corresponding military losses. And then the time has come to remember how many countries in this region are extremely dissatisfied with the active expansionist policies China, as well as those having territorial disputes with it. And so the United States again began to rock the two long-standing conflicts around the Senkaku Islands and Taiwan.

The Senkaku or Diaoyu Islands group is the subject of a dispute between Beijing and Tokyo, as well as Taipei. In fact, they are controlled by the Japanese, but China does not agree with this formulation of the issue, claiming rich gas fields discovered near the archipelago. In 2012, the Japanese government officially bought the disputed islands from their private owners, their fellow citizens. In response to the "nationalization" in the PRC, pogroms and the closure of enterprises owned by Japanese companies began. Over a thousand Chinese fishing vessels and patrol ships of the PRC Navy set off to the islands in protest. Since then, visits by patrol ships to the waters that Tokyo considers to be its own have become permanent. In Japan, the latest such watch, lasting a record 112 days, was annoyed by the country's defense minister:

Unilateral attempts to change the status quo by force are completely unacceptable.
It is worth recalling that in March 2021, the new head of the Pentagon, Lloyd Austin, confirmed the US readiness to defend the Senkaku archipelago in accordance with Article V of the US-Japan Security Treaty. What happens next if the Japanese Maritime Self-Defense Forces, inspired by guarantees from Washington, decide to attack Chinese warships that violate state borders? A real regional war may start, which will gradually involve other parties.

Another pain point, where the Americans are now actively pressing, is, for example, Taiwan. Despite the fact that the island is legally considered part of the PRC, it is not actually controlled by it. Until now, Beijing has not been able to peacefully achieve reunification with this territory, despite certain positive developments. At the same time, the power scenario as such was never removed from the agenda, which could serve as the strengthening of the PLA and the PRC Navy. However, despite the lack of official recognition of Taiwan's independence, the United States sees itself as the guarantor of the security of the separatists. These are the Americans' double standards.

Currently, Washington has stepped up pressure in this direction. Last April, President Biden sent an unofficial delegation of former senior officials to Taipei as a sign of "commitment to Taiwan and its democracy," prompting a nervous reaction from Beijing. Then, in the pages of the influential publication The Times, the director of the Washington Center for Global Policy, Professor Azim Ibrahim, suggested that the British government invite Taiwan to the UN climate summit and the GXNUMX meeting, which would actually mean recognition of its independence. The need to coordinate the actions of the United States and Japan on the Taiwan issue was stated in a joint communiqué of the American and Japanese defense ministers:

The stability of the situation around Taiwan is important for the security of Japan and the stability of the international community.
Again this Japan! Recently, more and more Western military experts speculate about when exactly China will attack the island. At the same time, it is presented as a catastrophe of a universal scale. What are the conclusions of The Economist:

If the Seventh Fleet does not intervene, China will instantly become the dominant power in Asia. America's allies around the world will know they cannot count on her. Pax Americana will collapse.
Oh, these "defenders of democracy"! Let us also pay attention to the proposal of the former head of the NATO bloc Anders Rasmussen to Europe and Asia to jointly side with the United States in the event of Chinese aggression against the island and develop a form of collective anti-Chinese security. That is, in essence, we are talking about the possibility of creating a broad international coalition against Beijing. Needless to say, in this situation, it is the PRC that is least of all interested in starting a war against Taipei? Perhaps NATO will not be fighting in the East China Sea, but imposing economic sanctions against China is welcome.

As a matter of fact, this is why the Americans are planning everything: to arrange a regional turmoil with someone else's hands, to take control of sea communications, to achieve the introduction of collective Western sectoral sanctions against their competitor. After that, the "Chinese dragon" itself will gradually "deflate".
Ctrl Enter
Noticed oshЫbku Highlight text and press. Ctrl + Enter
We are
"We must beat first": the geopolitical alignment around Russia is continuously deteriorating
Wars on distant approaches: Russia has already begun to act
Reporterin Yandex News
Read Reporterin Google News
19 comments
Information
Dear reader, to leave comments on the publication, you must sign in.