Biden was advised to end support for Ukraine. And "as soon as possible" ... 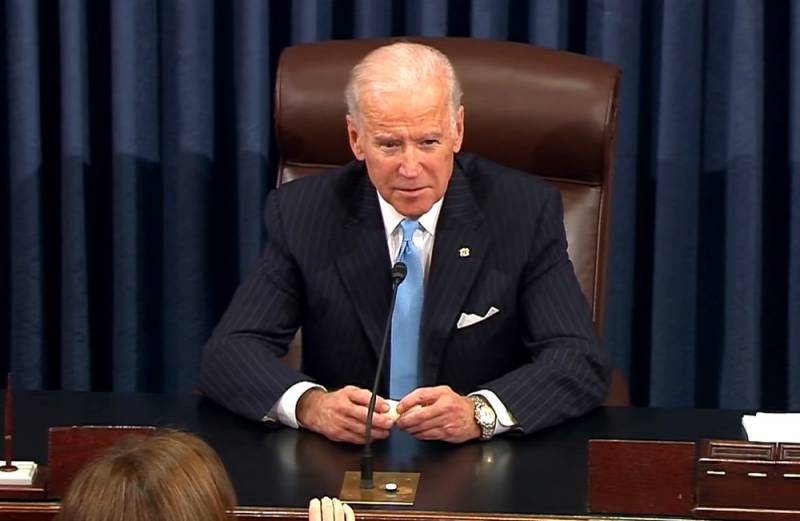 The attitude of the "collective West" to Kiev is changing literally before our eyes and far from for the better. Before he heard a couple of diplomatic "slaps" in the face, given to him by Berlin after an openly extortionate interview with Volodymyr Zelenskiy, which he gave to one of the German publications, a much more serious "resentment" emerged from the main "strategic partner" of Ukraine - the United States.


The local press for the first time, perhaps since the "Euromaidan" of 2014, openly sounded a call for the current US administration not only to reformat relations with the "non-profit" or, for example, to reduce their level, but to break with this country completely, and even do it in the shortest possible time. Does this sound like a verdict that could indeed be signed on US-Ukrainian cooperation? More likely yes than no, and now we will try to figure out why exactly.

What kind of democracy ?! Solid authoritarianism with neo-Nazism!

The article we are going to talk about was published recently in the American magazine The National Interest. This publication may well be considered the spokesman for the opinion of a certain (and far from being the smallest) part of the Washington political community, including on the “Ukrainian question”. This is evidenced by quite specific points, which we will talk about a little later, but for now - about the main meaning of the material. Its author, Ted Galen Carpenter, gives Ukraine a fatal, from the American point of view, "diagnosis." It turns out that this is not at all "tolerant and energetic democracy", as they are trying to prove it in words in Kiev, but a real "pseudo-liberal" and almost totalitarian state formation, which from the very beginning has been playing a dishonest game with the West.

It's terrible to say, but the journalist puts Ukraine on a par with the level of “anti-democracy”, not only with Turkey, but even with Russia! From this alone, all the "faithful patriots" in Kiev should already have a nervous fit. Further more. The National Interest finally (and not ten years has passed!) Will deign to notice and admit that in the coup d'etat of 2014, which in the article is called a "pro-democratic popular uprising", it turns out, in addition to those who "at the call of their hearts protested against the corrupt the authorities of Yanukovych ", the most active participation was also taken by the most real" radicals ". It is hard to believe it, but Mr. Carpenter does not limit himself to such a vague and vague definition, but directly says that the “Maidan” was not only attended, but played a “decisive role” in it by “ultranationalists” and even “outright fascists”! At the same time, the "Svoboda" and "Right Sector", banned in Russia, are specifically named.

Moreover, the author of the article with obvious sarcasm points out that the same structures (for example, the Azov battalion, which he openly calls neo-Nazi) have become an "integral part of the new democratic Ukraine", its army, special services and political life. But what then is this "democracy" - with Nazi stormtroopers? And Carpenter absolutely unambiguously states that it is they who reign on the Ukrainian streets after 2014, speaking of “numerous manifestations of extremism and anti-Semitism” that have become “commonplace” there. However, the author does not dwell on them alone, directly saying that "authoritarianism" became the state policy of Kiev, which "introduced censorship, persecuted dissidents" and allowed himself such things that were unacceptable from the point of view of advocates of "democratic values" during the presidency. Poroshenko.

However, according to The National Interest, with the coming to power of Volodymyr Zelensky, "the bad situation has become even worse." The closure of the 112, NewsOne and ZiK TV channels, which are objectionable to the authorities, the prosecution of Viktor Medvedchuk and the detention of the SBU of "public activists" on charges of "pro-Russian activities" - the author of the article cites all these facts as evidence that Volodymyr Zelenskyy carries out political repressions "on the basis of completely vague standards and emotions ”. Tellingly, another example of the president's "authoritarianism", Carpenter considers the "showdown" that unfolded between him and the mayor of Kiev Vitali Klitschko, in which, according to the journalist, Zelensky sees "an annoying rival." In a word, from all those accusations that are put forward in the article against the Ukrainian authorities without the slightest sentiment, to the classification of it as a "regime" with which, as you know, Washington speaks exclusively in the language of ultimatums and sanctions, the distance is already less than half a step ...

This is precisely what Carpenter characterizes modern Ukraine when he speaks of its relationship with the United States. At the same time, the above revelations are by no means record-breaking in terms of the sensationalism of the approach - the author not only openly admits that the "American trace" in the 2014 coup d'etat is "impossible to hide", but also voices something even more important. In his opinion, "Washington's policy on the Ukrainian issue" since the time of the "Maidan" has been largely "fraudulent". What I mean here is that some "representatives of American foreign policy" have tried and are trying to create a false image of "non-profit" in their country, which is clearly not corresponding to reality. As an example, Carpenter cites a speech in the US Congress by former Acting Ambassador to Kiev, William Taylor, who tried to broadcast about a kind of "all-encompassing democratic nationalism" that allegedly guides the leaders there. Moreover, he allowed himself to compare the current Ukrainian realities with "the United States in its best moments."

To make such comparisons and, in general, to build relations with Kiev on the basis of absolutely inappropriate in this case "democratic solidarity" the author of the article considers "offensive for the American side from a moral point of view." "Treating Ukraine as an ally is by no means unacceptable and reckless!" - he makes a categorical conclusion. And he sums up that the Joe Biden administration must "give up all relationship with it" and the sooner it does, the better. Note that this is not about reducing the amount of financial or military aid, not about refusing to support certain initiatives of Kiev, but about completely "deleting" it from Washington's foreign policy agenda. This is a verdict, of course.

Is it possible to consider what has been written as an expression of private opinion that does not play a special role? Unlikely. Let me remind you that during the period of the "spring aggravation" of Ukrainian-Russian relations, which came to the redeployment of our troops to the borders of this country, The National Interest published material of a very similar tonality, which belonged to the pen of the same author. Its meaning boiled down to the fact that the United States should in no case interfere in this conflict. Then Carpenter wrote that the expression of support from Washington is likely to push Kiev to repeat the mistakes of Tbilisi in 2008 and the very sad consequences that followed. The author unambiguously asserted that "no sane American" can advocate military support for Ukraine. How did it end, I hope, no need to remind? That's right - Mr. Biden's call to Vladimir Putin and a sharp turn of the US Navy destroyers ... The National Interest is not a "yellow" leaflet or a tabloid, its publications mean something.

There is one more point that works in favor of this version. The publication of the article in this magazine somehow very successfully coincided with the publication of the report of the UN Monitoring Mission on Human Rights in Ukraine. This document has a purely negative connotation and directly indicates that what is happening in the "nezalezhnoy" directly "contradicts international standards regarding the observance of human rights." Examples of violations are cited, which is, again, very typical, almost all the same that Carpenter talks about. Like a carbon copy. In addition, UN officials mention the incessant killings by the Ukrainian side of civilians in Donbass, the continuing arbitrariness of the SBU, the atrocities of radicals who remain absolutely unpunished, no matter what crimes they commit.

In his recent interview with the German newspaper Frankfurter Allgemeine Zeitung, Volodymyr Zelenskiy, among other things, mentioned his firm intentions "to discuss with President Biden" some "plan B for Donbass that goes beyond the Normandy format". There are enormous doubts that the head of the White House will discuss anything at all with this leader, and even more so, some "plans" there, the mere mention of which caused an extremely negative reaction both in Berlin and in Paris. Biden now already has rather tense relations with his European allies, and because of Kiev's absurd "wishes" he will definitely not spoil them. Most likely, he will not quarrel over them and with Moscow. It is quite possible that it is not in vain that the meeting of the US and Russian presidents is not in vain awaiting the meeting of the presidents of the United States and Russia with poorly concealed horror. Washington, perhaps, will defend an ally. But the "client state", and even the "odious" - this is unlikely.

And, by the way, about odiousness. Truly, there is no such bad situation that Ukraine could not make it worse. In light of the increasingly frequent accusations against her of rampant radicals and obvious neo-Nazi tendencies in the local "politic", the story that took place just yesterday, June 3, looks very characteristic. For consideration by the local parliament, the Verkhovna Rada, its deputy Maxim Buzhansky submitted a bill banning the legalization of Nazism and the glorification of war criminals. However, during a discussion in the session hall of this issue, which cannot have a double interpretation for any normal person, Oksana Savchuk, a deputy from Carpenter's article "Svoboda", said that "SS fighters" are "heroes."

Is it any wonder that the bill was not passed. The local nationalist rabble is accustomed to absolute permissiveness to such an extent that it already allows itself to openly “zigzag” in public during openly Nazi marches and other similar events being held unrestrictedly in Kiev. This public does not intend to give up its positions even under the threat that such antics may well become a formal reason for breaking off relations with overseas "partners", not realizing that without their support Ukraine in its current state will not exist for a very long time.
Ctrl Enter
Noticed oshЫbku Highlight text and press. Ctrl + Enter
We are
Who actually won the Cold War and what the future holds for the world
"We must beat first": the geopolitical alignment around Russia is continuously deteriorating
Reporterin Yandex News
Read Reporterin Google News
59 comments
Information
Dear reader, to leave comments on the publication, you must sign in.