Why Ukraine set out to sell its GTS 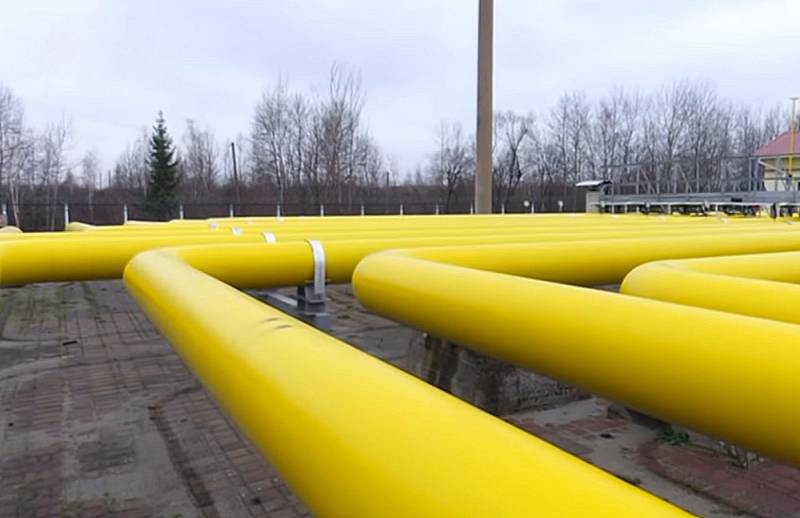 President Volodymyr Zelenskyy quite unexpectedly announced his readiness to sell the Ukrainian GTS to European and American partners. Rather, the word “sale” did not sound at all, and instead a more streamlined wording “have as co-owners” was used, which can be interpreted very broadly if desired. Is this a gesture of despair or the final stage in the West's absorption of the remnants of the Ukrainian economics?


First, it is necessary to say a few words about the gas transportation system itself and Kiev's previous attempts to sell it to someone in order to fairly assess what the “young democracy” has brought its country to. The GTS inherited Nezalezhnaya from the USSR and is still one of the largest in the world: it is over 37 thousand kilometers of pipes and 71 compressor stations. It is an integral part of the unified internal gas distribution system of Ukraine, therefore, at the entrance of the GTS it is capable of accepting up to 290 billion cubic meters per year, and at the outlet its capacity is 175 billion. Due to the lack of funding, the state of the gas transmission system is approaching critical. 6 years ago, an independent German appraisal company set the wear rate at 85%. Naturally, the GTS needs urgent overhaul, and for a very long time, but the problem rested on the Ukrainian corruption realities, as well as on the banal greed and stupidity of officials.

Back in 2002, Kiev was offered an option with a trilateral management of the gas transportation system with the participation of European consumers. But the Ukrainian authorities did not want to part with their monopoly position and allow someone to stick their nose into their "feeding trough", if we call a spade a spade. This was another reason for Moscow to build bypass gas pipelines Yamal-Europe and Blue Stream. The "gas wars" during the presidency of President Yushchenko confirmed the need for additional "Nord Stream" and "South Stream" through Bulgaria. Under Yanukovych, Gazprom offered Kiev to buy out 50% of the Nezalezhnaya gas transmission system for $ 4 billion and provide in exchange a discount on gas for a long period. But even here they did not agree on the price: the Ukrainian authorities estimated the GTS at several tens of billions of dollars. We could not agree again on a joint trilateral administration with the Europeans. And then the 2014 Maidan came, and all such topics were finally removed from the agenda.

What do they have in the bottom line today? There is a worn-out Ukrainian GTS through which Gazprom is obliged to pump up to 40 billion cubic meters of gas a year over the next four years. A bypass Turkish Stream has already been built to replace the Bulgarian South Stream, and Nord Stream-2 is almost completed, through which the Russian monopoly on the project can pump up to 55 billion cubic meters of gas annually. Therefore, after it is put into operation at full capacity, Moscow will no longer need Kiev's services. Ukraine will lose payments for gas transit to Europe, as well as lose the so-called "virtual reverse". In fact, Nezalezhnaya simply takes Russian fuel from the main pipe for its own needs, and then makes a netting with European partners. If there is no real transit, then there will be nothing to take away. Then Kiev will have to either look for surplus gas from its EU neighbors, or ask Gazprom to resume direct supplies. And there, you see, economic concessions will be followed by political... Victory, comrades?

Alas, everything is more complicated than we would like. The collective West is extremely uninterested in letting Ukraine go back to Russia. For Europeans, this is an additional market for their products, a source of cheap labor and resources; for the United States, it is the most convenient springboard for military and political pressure on the Kremlin. In addition, the EU needs huge Ukrainian UGS facilities to balance volumes in order to reliably pass the heating season, and for this, gas transit through the GTS must be preserved. It was not for nothing that Chancellor Merkel bluntly insisted on the preservation of Ukrainian transit even in the event of the launch of North Potkoa-2. Europe and Russia need an additional gas pipeline bypassing Ukraine, but Kiev and Washington do not. At the same time, the United States has a powerful lever of pressure to put obstacles in the way of the implementation of Nord Stream 2. Such a complex geopolitical tangle of interests has formed around this gas pipeline. And now let's try to imagine how our country could cut it, or rather, what should happen for Russia to emerge from this party as a winner.

Let's imagine that the bypass gas pipeline is completed and certified. In accordance with the norms of the Third Energy Package, Gazprom will be able to use it only at 50% of its capacity, that is, to pump not 55 billion cubic meters per year, but only half. Let's say Washington and Brussels come to some kind of consensus, under which Nord Stream 2 can work, but provided that certain volumes of transit through Ukraine are preserved. Naturally, the West will try to place the burden of maintenance and overhaul on the Russian corporation. What then remains? Only hope for a "miracle" that will exclude the Ukrainian GTS from the general alignment. Let's remember that in 2014-2015, in this crazy country, who just did not talk about blowing up a gas pipeline. Such a threat was expressed, for example, by the leader of the extremist Right Sector, banned in Russia. How inadequate the Ukrainian government is can also be evidenced by the interview of the Deputy Minister for the "temporarily occupied territories" Yuriy Grymchak, where he stated the following literally:

Do you think there were no plans to undermine the gas pipeline system on our part? I am telling you about the state plans.
Crazy country, crazy people, a bunch of weapons in hand. So they will really blow up their own main pipeline. And then again, but in a different place. Once again. Or else something bad will happen to a worn out system. Such a "black swan" will completely change the alignment around Nord Stream 2, since Europe itself will be asking Gazprom to use the pipeline to its full design capacity. And here we return to the last statement of President Zelensky, who clearly felt that something was wrong with his heart:

I really think that it would be cool to have both partners and co-owners in Ukraine's GTS, Europe and the United States. Because the question is not that no one would damage this pipe for us, would not take any action against it, but that everyone would defend these contracts and protect the security of Ukraine and Europe as a whole.
Obviously, Kiev hopes that the transfer of property rights to Western partners will be a kind of "talisman" for the GTS. Anything can be. True, it should be borne in mind that the happy new "co-owners" of the dilapidated pipe will have to bear the burden of its maintenance and major repairs, but do they need it? Great question.
Ctrl Enter
Noticed oshЫbku Highlight text and press. Ctrl + Enter
We are
Peace enforcement operation. Russia inflicts a preemptive strike on Kiev
Three years left: Ukraine will be sold in parts
Reporterin Yandex News
Read Reporterin Google News
4 comments
Information
Dear reader, to leave comments on the publication, you must sign in.