"Takeover is preparing!" Why the West was worried about the meeting between Putin and Lukashenko 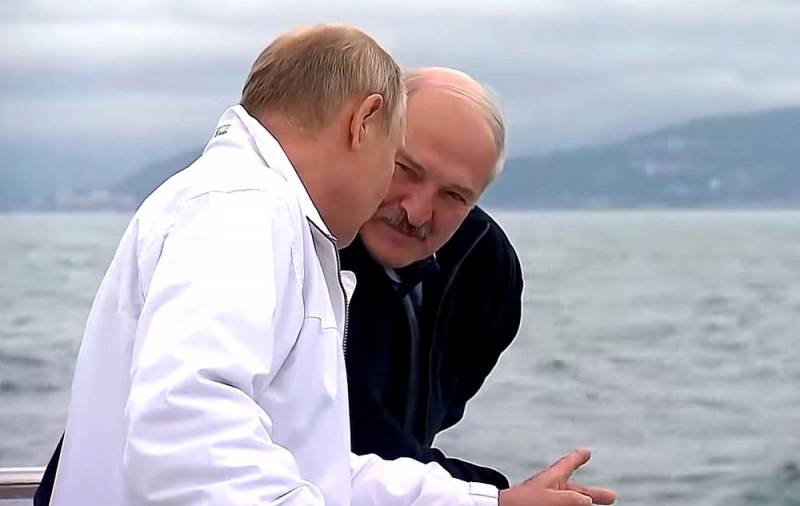 The summit of the presidents of Russia and Belarus held last weekend in Sochi can with good reason be called one of the most "closed" events of this kind. After it ended, the leaders of the two countries did not go out to the press, which is traditional for such cases, let alone hold a press conference. Even Dmitry Peskov, who, it would seem, should have shed at least some light on the presidential negotiations, did not destroy the deaf wall of silence on the topics and results of the communication between Vladimir Vladimirovich and Alexander Grigorievich, which lasted for quite a long time. But he voiced only the most common phrases ...


What does that mean? What such secret were they talking about there ?! How did this affect the relations between Moscow and Minsk - did they bring them closer together or, on the contrary, did “cracks”, controversial issues and conflict moments appear in them again? It seems that Western analysts and experts, like real fortune-tellers, have already exhausted a lot of the notorious coffee grounds, trying to get answers to these questions. What conclusions they came to as a result can be clearly seen from the relevant publications of the leading Western media. But how far can the put forward assumptions correspond to the truth? Let's try to figure it out.

And bathed in the cold sea ...

Those poor fellows who, sparing no effort, tried and are trying to penetrate into the “secret meaning” of the meeting in “Bocharov Ruchei”, had to “analyze” everything - facial expressions, gestures, and other smallest details. If the Washington Post got to the point that it made its maxim about “full support of the Kremlin for Lukashenka” on the basis of “good-natured jokes and friendly body language,” clearly, according to its experts, seen during the conversation between the two leaders, then the matter is very bad. Some, of course, went even further in their flight of thought. Assumptions were expressed one more outlandish than the other - someone, for example, undertakes to assert that “Lukashenka flew to Sochi to report to Putin for the story with Ryanair and Protasevich”. Moreover, Alexander Grigorievich himself said: they say, "brought a suitcase of documents" directly related to this story, so that "Moscow sorted it out." However, it is still problematic to assume that the meeting between the two presidents was due to the detention of one bastard (albeit with far-reaching consequences). So why did it take place?

Brief: “the issues of the development of bilateral relations were discussed and economic cooperation ”, nevertheless voiced by Peskov, is literally about nothing. It is clear that these moments (as well as the "interrupted flight" of Protasevich) were undoubtedly discussed. However, it is extremely doubtful that such "commonplaces" were spoken out behind closed doors for five whole hours on the first day and a lot of time afterwards. So far, very little is known about the specific results. Yes, Minsk will receive $ 500 million - but, in fact, this is far from a breakthrough, but just the second part of the loan, the decision to grant which was made by Moscow back in the past, in 2020. The amount is not God knows what, although it is better than nothing, and in general Belarus in the current situation any help is just right.

Some in the West even deigned to be sneering about this: they say, Putin, a monster like that, “forced” Lukashenka to plunge into the not too warm Black Sea, where, by the way, he did not dive himself. And that, poor fellow, and there was nowhere to go - for the sake of half a billion and not in such cold water you will climb ... That's all, nonsense, of course. Generally speaking, some Western media are very willing to speculate on the topic of alleged "discord" between the two leaders, savoring it as soon as possible. For example, the British The Times undertakes to assert that “Lukashenka is already annoying even Putin”. Why would such a conclusion? The publication comes to the aid of Andrew Wilson, who is considered to be a great expert on Belarus, and the author of the book "The Last Dictatorship of Europe". He states that when “watching video footage from the meeting, he noticed: the Russian leader is annoyed by the conversational style of his Belarusian colleague”. The publication summarizes that "Lukashenka is now in the weakest position in recent years," however, "The Kremlin has not received anything serious in return for the full support provided to Minsk."


This is where, by the way, the really interesting begins - certain "experts" are trying to voice the "list of Putin's demands", which he allegedly voiced in Sochi. Fantasy is a good thing, but for some it obviously does not know how to hold back. So, among them are called "the complete transfer of state Belarusian assets under the control of Russian oligarchs", "the transition of the two countries to a single currency with an emission center in Moscow", "the creation of new Russian military bases on Belarusian territory", "the subordination of the KGB of Belarus to the Russian FSB", "One hundred percent coordination of external policy Minsk with Moscow ”and even“ Russification of Belarusian toponymy and history ”. At the same time, those who put forward such, if I may say so, versions do not even think about how blatantly absurd they are all together and each separately.

The above is a far from complete list of voiced inventions, but the rest are even more ridiculous. Well, as for those listed ... Who now needs the "assets" of the state, which is under the increasingly powerful sanctions "press" ?! Here are few Russian businessmen's own losses - in order to even hang on themselves there. The same can be said about the “single currency”. In the current situation, it would be financial suicide for Moscow to arrange such a thing. Military bases? This is also a problem ... If it is necessary, we will create it. Well, about the “subordination of the KGB” and the “Russification” of the names of Belarusian villages - this is just ridiculous. Some kind of kindergarten, not "details of the ultimatum" that Vladimir Vladimirovich allegedly announced to Alexander Grigorievich, simultaneously dipping him into the cold sea waves. There is nothing even to discuss here. What else is there?

Oh yes ... Coordination of foreign policy. Is it still unclear to someone that Lukashenka received such a “vaccine” from “multi-vector” over the past year that would be enough for ten presidents? And, by the way, it continues to receive - let us at least recall the actions of Kiev. Minsk today is really tied to Moscow in the closest way, but the West, who is terribly worried about this, made the maximum effort to ensure that it happens exactly this way, and not otherwise. The same Washington Post laments: “Lukashenka no longer has trump cards to flirt with both the West and the East, because most of the world community recognized his regime as illegitimate ...” “Each new step of the West to isolate Lukashenka makes him even more dependent on Moscow. Now this addiction has become final, ”echoes the Wall Street Journal. What do you want, gentlemen ?! It was necessary to introduce more sanctions, and to put forward demands even more impracticable - like the immediate transfer of power to Tikhanovskaya and her gang. And more often to call the Belarusian leader “illegitimate” and “self-proclaimed”.

Now, understandably, the "world community" is engulfed in a terrible cognitive dissonance. On the one hand, Lukashenka is a "tyrant and dictator" and he should be "punished". On the other hand, for some reason, it is impossible to do this using the old proven methods of the “color revolution” that have worked perfectly in Ukraine. And as a result, something comes out completely opposite to what the whole mess, in fact, was started for. At the summit of the European Union, which was hastily assembled after the Ryanair incident, this issue was voiced, according to available information, very sharply. The meeting was strictly confidential, furnished with such measures of conspiracy that would fit a spy meeting, and not a meeting of heads of state. At the request of the head of the European Council Charles Michel, they were even strictly forbidden to use mobile phones during it. But some information was still leaked. The alarm was raised by none other than the head of European diplomacy Josep Borrell, who was the first to declare that the history of the forced landing of both the plane and the "oppositionist" would most likely "be used by Vladimir Putin in order to accelerate the implementation of his plan to absorb Belarus." Many of those present with this "brilliant" maxim of Monsieur Borrell agreed and from the Sochi meeting, respectively, they were waiting for the announcement of the merger of the two countries. But they did not wait, much to their surprise.

However, the deaf silence of the two leaders scares them even more - after all, really serious and important things are done in silence. The talk in the West that “the Kremlin used the deteriorating situation in Minsk and its need for lending to get new concessions” is, of course, not just superficial, but fundamentally wrong view of things. Everything is much deeper and more complicated.

Russia, as already mentioned, has no need to "demand" something from Belarus and its leader. At present, both countries are really confronting with a united front the previously unprecedented pressure of the "collective West", and here they can’t get away from each other. For Moscow, the loss of its only ally in the post-Soviet space would mean a colossal geopolitical failure. Minsk simply cannot survive without the support of our country - and the further it goes, the more obvious it is. Only those with a very rich imagination can seriously say that the Kremlin "dreams of removing Lukashenko from the presidency and replacing him with a politician who is more comfortable for them." Yes, Alexander Grigorievich, let's face it, is not the most flexible and convenient partner. However, it must be admitted that in the current conditions there is simply no alternative to it and there cannot be. In the midst of a battle, commanders do not change - unless they fail miserably everything that is possible. And Lukashenka, fortunately, copes quite successfully with his duties as head of state in the most difficult time for him.

Some in the West have high hopes for the upcoming meeting between Vladimir Putin and Joe Biden. This idea, for example, is voiced on the pages of the British Financial Times. They say that the American president "will decisively demand the observance of human rights in Belarus," and ... So what? Will our president obediently “surrender” Lukashenka and refuse his support? Well, yes, keep your pocket wider ... It should be noted that just after the summit in Sochi, Russian Deputy Foreign Ministry Sergei Ryabkov voiced Moscow's intention on the eve of the meeting of the Russian and US presidents "to give Washington a number of signals that would be uncomfortable for him," without specifying, true, what exactly is it about. So who will "decisively demand" from whom and what exactly is still a very big question. No, Vladimir Vladimirovich and Alexander Grigorievich seem to have come to an agreement to something very important. So we are waiting for surprises.
Reporterin Yandex News
Reporterin Yandex Zen
23 comments
Information
Dear reader, to leave comments on the publication, you must sign in.