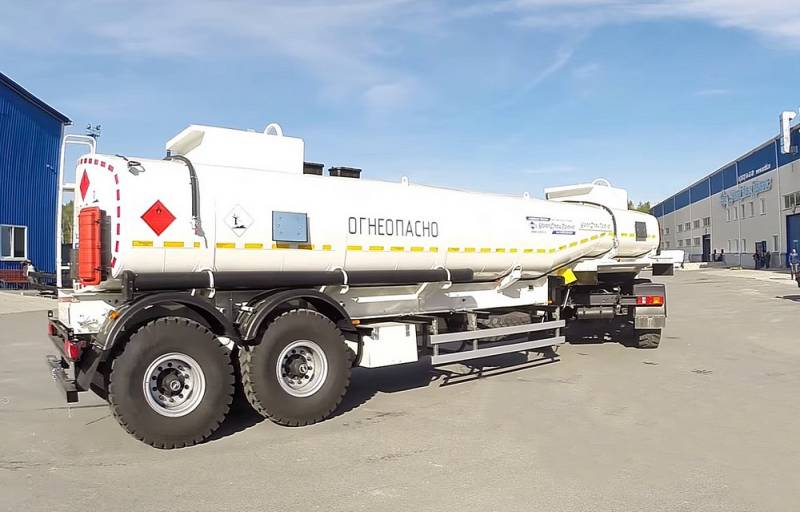 Ukraine runs the risk of being left without Belarusian gasoline at the very beginning of the summer season. Several days ago it became known that Minsk had suspended the supply of A-95 motor fuel to Kiev. What is this, a side effect of the US sanctions, or did Batka finally decide to really teach a lesson to Independence, which closed the air blockade of Belarus on its part?


Sergei Kuyun, director of the Ukrainian A-95 Consulting Group, announced that Minsk had decided to suspend gasoline supplies:

The worst decision that Belarusians could make in the current situation is to close the supply of A-95 gasoline to Ukraine, where their product has 50% of the market.
In fact, Nezalezhnaya has created all the main problems for itself. It inherited a lot from the USSR, including six oil refineries with an aggregate capacity of 42 million tons per year. The raw material base for them is the Russian "black gold", and their own domestic production is quite small, at the level of 1,5-2 million tons. But as a result of the economic activities of the "young democracy" of the six refineries, only one, Kremenchugsky, has remained so far, owned by the odious oligarch Igor Kolomoisky. In general, one should not be surprised that Ukraine is totally dependent on imports of gasoline. Belarus holds about 50% of its market, the rest of the shares are distributed between Russia, Poland and other exporters.

Thus, the simultaneous loss of half of the volume of the domestic market will create huge problems for the Ukrainian economics... There will be a shortage at the filling station, and the price of fuel will jump sharply. Kiev will try to replace Belarusian gasoline, but it is not easy to do this, since its European neighbors now have no excess motor fuel either. Purchases from Turkey are possible, but there will be no discounts, on the contrary, due to the lengthening of the logistic leverage and sea transportation, the cost of production for the end consumer will increase by at least 10-15%. For the half-dead Ukrainian economy, this will be a very difficult test. So what is it, "Batka's revenge", or just "it happened"?

Recall that the US Treasury recently unfrozen the restrictions on nine enterprises of the Belarusian petrochemical complex with the following wording:

Further extension (suspension of the sanctions) will be incompatible with the Belarus Democracy Act and with American values.
The "Naftan" refinery, a subsidiary of "Belneftekhim", fell under the sanctions blow from Washington, and the second, Mozyrsky, is undergoing scheduled repairs. Now American individuals and legal entities are prohibited from dealing with these Belarusian enterprises. But these, alas, are far from all the problems of the official Minsk. As we have already told, the largest oil exporters to Belarus, the Russian companies Surgutneftegaz and Rosneft, suspended supplies to the Naftan plant, which fell under US restrictive measures. According to the Reuters news agency, the reason was their fear of falling under US secondary sanctions.

In fact, this calls into question the entire Belarusian business for the processing of Russian raw materials and the sale of oil products. It also means that Ukraine is also without supplies of relatively inexpensive gasoline from a neighboring country. Having an "allied discount" from Moscow, Minsk could afford a fairly flexible price policies... If there are sanctions from the United States, then Belarus has neither oil nor gasoline for sale. Nezalezhnaya ditched its internal processing with its own hands.

Of course, various solutions to this problem are possible. For example, in Russia there may be special intermediary gasket firms that will conduct business with sanctioned refineries. Vladimir Vladimirovich and Alexander Grigorievich will sit down and come up with something, not the first time. And then it will be interesting to see if the deliveries of the A-95 to Ukraine will resume, or are Moscow and Minsk, finally in the same trench, trying to solve a different problem?

To teach Kiev a lesson?

The idea that “Old Man”, seven years after the coup d'état, nevertheless decided to follow the mainstream of Russian policy towards Ukraine, is not without foundation. Let us remember how much President Lukashenko fought with the Baltic states, but always diligently separated the economy from politics. However, 2020 became a turning point in this matter. For the refusal to recognize his re-election as legitimate and active support of the rival Tikhanovskaya, Alexander Grigorievich taught Lithuania a lesson by transferring half of the export of its oil products to our Ust-Luga, and now we are talking about mineral fertilizers, for which a special port terminal will need to be built. But why is Kiev better than Vilnius?

Recall that the Ukrainian authorities also did not recognize the legitimacy of the presidential elections in Belarus, in solidarity with the West. And now, Nezalezhnaya was among the first to join the air blockade of Belarus. Is it possible to leave such unfriendly steps of a neighboring country unanswered? Let's assume that Minsk really deliberately staged a fuel hunger for Ukraine, using a convenient pretext. But how long will it last?

Let's be realistic, such a blockade cannot last forever. Belarus needs foreign exchange earnings, which can only be provided by potash fertilizers, "black gold" and oil products. Let's make the following assumption: the supply of Russian raw materials to Belarusian refineries will resume in full in the very near future following the results of agreements between Putin and Lukashenko, but problems with the export of gasoline to Ukraine will remain for now. Well, so that they feel the effect in full and draw some conclusions for the future.
Ctrl Enter
Noticed oshЫbku Highlight text and press. Ctrl + Enter
We are
Peace enforcement operation. Russia inflicts a preemptive strike on Kiev
“The dark August night came the one whom the Ukrainians were waiting with horror”
Reporterin Yandex News
Read Reporterin Google News
12 comments
Information
Dear reader, to leave comments on the publication, you must sign in.