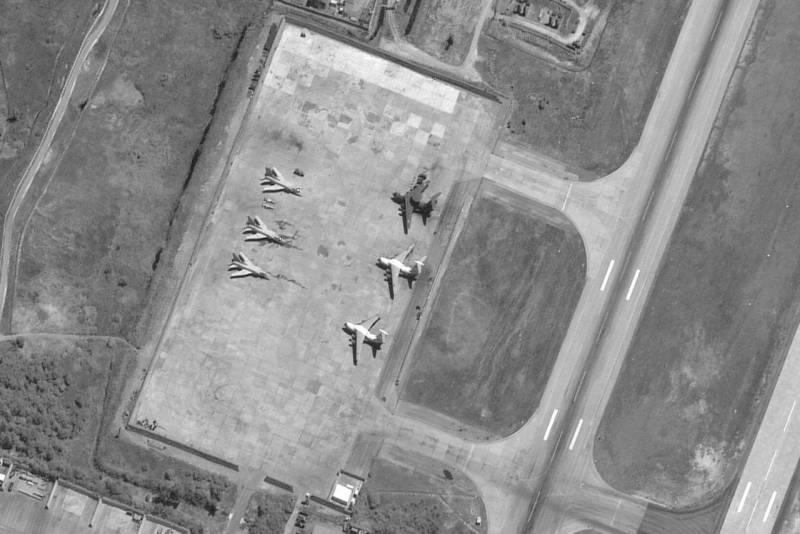 A satellite image of the Russian Khmeimim airbase in the Syrian province of Latakia has appeared on the Web. From space, three Tu-22M3 long-range supersonic missile-carrying bombers, a pair of Kh-22 air-to-surface cruise missiles (range up to 600 km), two military transport Il-76MD and one AWACS aircraft A-50U of the Russian Aerospace Forces.

It is alleged that the picture was taken on May 27, 2021 and shows the same trio of missile carriers that flew in in SAR on May 25 for training over the Eastern Mediterranean. Wherein is knownthat on May 27, two Tu-22M3s conducted a training flight accompanied by multifunctional Su-35 and A-50U fighters over the country's territory and the sea. After completing the assigned tasks, the missile carriers should return to Russia.

Note that the Khmeimim airbase has been leased for 2015 years since 49. Recently, the runway was modernized there (it was extended by 300 m to 3,2 km) and any type of aircraft can now land on it.
Ctrl Enter
Noticed oshЫbku Highlight text and press. Ctrl + Enter
We are
Paired flight of Tu-22M3 missile carriers from Khmeimim was reinforced by Su-35 and A-50U AWACS aircraft
S-300 SAMs seen in the USA
Reporterin Yandex News
Read Reporterin Google News
2 comments
Information
Dear reader, to leave comments on the publication, you must sign in.