Karabakh: How Both Sides Try to Undermine Russia's Peacekeeping Efforts 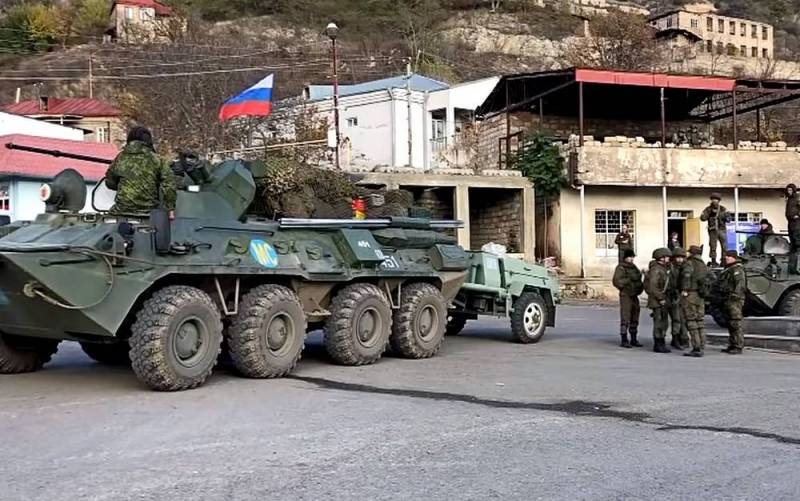 On the territory of the Gegharkunik region of Armenia, the Azerbaijani military captured six Armenian soldiers who were performing engineering work in the border area: mining and installing appropriate warning signs. In response, according to the statements of Baku, the reconnaissance and sabotage group of the Armed Forces of Armenia tried to penetrate the territory of Azerbaijan, but was detained. The number of border incidents between the two irreconcilable adversaries is constantly growing, despite the reached trilateral armistice agreements. Is another escalation possible that could lead to the second, final round of the war for Nagorno-Karabakh?


Let's face it, yes, it is possible. The problem is that the key task facing official Baku and its allied Ankara to open a transport corridor through Armenia has not actually been achieved. We are talking about the Zangezur (Syunik) corridor. After the collapse of the USSR, the Nakhichevan Autonomous Republic was cut off from the rest of Azerbaijan by the Syunik region of Armenia (Zangezur). During the Soviet period, a highway and a southern branch of the Transcaucasian railway functioned there. As a result of the first Nagorno-Karabakh war, which was successful for Yerevan, several Azerbaijani regions bordering Iran came under the control of Armenians, the land corridor was blocked, and the railroad track was completely dismantled. Transport links with the exclave of Baku could only be maintained by air or by transit through the neighboring Islamic Republic. The parties failed to find a compromise through peaceful negotiations.

Baku managed to resolve the problem in 2020 by military force, with the support of Ankara, defeating the Armenian army in just a month and a half and regaining control over most of Nagorno-Karabakh. In accordance with the trilateral agreements, Yerevan was supposed to open the land Zangezur (Syunik) corridor for Azerbaijan. This would give the winners a lot of "goodies". It is estimated that Azerbaijani exports will grow by more than $ 700 million annually. Baku will be able to save up to $ 10 million a year, which now has to be spent on subsidizing air flights to Nakhichevan, as well as on gas transit through Iran, where Tehran keeps up to 15% of the cost as payment for its services. Well, Turkey would get through the territory of its ally a land corridor to the Caspian Sea, where tempting prospects of creating a "logistic superpower" open up.

So, more than half a year has passed since the end of the military defeat of Armenia, but things are still there. In Yerevan, the opening of a transport corridor through the Syunik region is associated with the extradition of all prisoners of war. They refuse in Baku, believing that the Armenian soldiers detained after the declaration of an armistice are "saboteurs and terrorists." One can understand why Yerevan is actually evading the fulfillment of its obligations. The problem lies in the not fully regulated legal status of the Syunik region. Rather, each side interprets this status differently and considers the cards referred to by the opponents as "fakes". The Armenians are quite rightly afraid that after the opening of the transport corridor and the start of the construction of the road, Azerbaijan will actually take possession of the disputed strategically important region and at the same time cut it off from the Iranian border. Baku, as a winner, demands its own:

We are implementing the Zangezur Corridor, whether Armenia wants it or not. If he wants, then we will decide easier, if he does not want, we will decide by force. Just as before and during the war, I said that they must free themselves from our lands, or we will expel them by force. And so it happened. The same will be the fate of the Zangezur corridor.
A certain dizziness from the success of President Aliyev is clearly evident. The Azerbaijani military was recently brought into the territory of the disputed Syunik region. Former Prime Minister Nikol Pashinyan, who is participating in the new election campaign, in turn demands from the CSTO to take all necessary measures so that Baku withdraw all its soldiers from the Armenian land. The conflict is obvious and insoluble by peaceful means. Azerbaijan and Turkey never got what the second Nagorno-Karabakh war was started to a large extent for. And why does everyone think that they will endlessly endure it? Baku has enough strength for the second round, and now there is not even a legitimate government in Yerevan.

The key question is how the Kremlin will behave in this case, which side will the Russian peacekeepers on the territory of the unrecognized republic take? During the "one and a half month war" of 2020, Moscow was emphatically neutral so as not to spoil its relations with Azerbaijan and Turkey, so why should something be different this time? And after all, formally, the Kremlin is right to distance itself from this long-standing interethnic conflict. The problem is that this is shaking the foundation of the CSTO, within which Russia and Armenia are military allies. Yerevan defiantly sent an appeal to this organization with a request to take measures to expel the Azerbaijani military from the territory of the Syunik region. She is still studying the issue. In response, Nikol Pashinyan threatened to contact other structures:

Armenia does not exclude the possibility of appealing to the UN Security Council if the CSTO instruments do not allow solving the problem at the border.
The willingness of the Armenian leadership to resolve the issue through the head of the CSTO and the Kremlin, to put it mildly, does not work in the best way for the international image of this organization and Russia, around which it was actually created. In fact, our country itself becomes a hostage to its own policy "Multi-vector", for which we traditionally scold Belarus.
Ctrl Enter
Noticed oshЫbku Highlight text and press. Ctrl + Enter
We are
Who actually won the Cold War and what the future holds for the world
Ten "defeats" of Putin
Reporterin Yandex News
Read Reporterin Google News
10 comments
Information
Dear reader, to leave comments on the publication, you must sign in.