In China: American Warmongers Will Be Compelled to Increase Arsenal of Nuclear Weapons 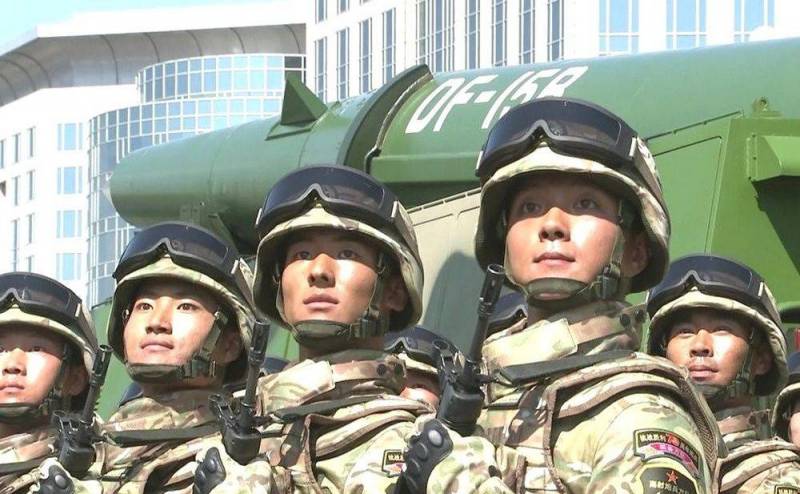 The United States is modernizing its strategic containment capability to contain China. Defending its sovereignty and national interests, Beijing will be forced to increase its own arsenal of nuclear weapons due to American warmongers, adequately responding to the threat from Washington. This was reported on May 28, 2021 by the Chinese newspaper Global Times ("Huangqiu Shibao"), citing the opinions of military experts from the PRC.


Chinese experts are confident that, faced with a large-scale problem from the United States, the PRC will have to build up its strategic weapons. In particular, this will affect the maritime component of the PLA's nuclear triad. The qualitative and quantitative growth of this potential should contribute to stabilization and peace in the world.

The Americans want to tackle the militarization of outer space, reform and rearm their troops, deploying a significant grouping in the Indo-Pacific region to put pressure on China. However, Chinese military experts believe that Washington's attempt will not give the desired result, because most states are not interested in unleashing a war.

According to Reuters, the US will purchase ships and aircraft, and develop and test hypersonic weapons and other "next generation" weapons systems to create opportunities to counter Russia and China. The new draft US defense budget for the next fiscal year includes spending at $ 753 billion, up 1,7% from the current year.

The data show that China has kept its defense spending at around 1,3% of GDP in recent years. According to Chinese analysts, Beijing has never sought an arms race with Washington and will not spend as much as the Americans. Perhaps the United States is preparing for an armed conflict with the PRC and the Russian Federation.

Given that the United States regards China as its main imaginary enemy, we need to increase the quantity and quality of nuclear weapons, especially submarine ballistic missiles (SLBMs), in order to effectively protect our national security, sovereignty and development interests.
- said the expert Song Zhongping.

Some military experts said China should also increase the number of DF-41 ICBMs, which have the longest range of any Chinese ICBM.

Military expert Wei Dongxu thinks that the new initiatives will allow the Americans to acquire more satellites to conduct extensive intelligence activities, exchange data and support military operations. The United States will try to maximize the use of allies, expand its military presence and the number of radars, and also attract other countries to its side against China.

Chinese military experts suspect that the US wants to form an alliance with India, Australia, South Korea and Japan against the PRC. At the same time, India is likely to buy more weapons from the United States and increase the number of joint exercises. Washington will try to involve New Delhi as much as possible in its strategy. However, India has doubts about the advisability of deploying US troops on its territory. In addition, India is not eager to fight China, even in exchange for weapons. Technology and information.

Japan and South Korea also fear falling prey to American plans as a result of Asia becoming a huge theater of war. For example, in Seoul, protests against the presence of the Americans are getting louder and they do not want to spoil relations with Beijing.

According to Zhang Junshe, a senior researcher at the PLA Naval Research Institute, Australia is likely to allow the United States to deploy more military equipment on its territory, making it one of the few American allies in the region. But in doing so, Australia will be targeted in the event of conflict, and a responsible government that truly cares about the interests of its people will never allow it.
Ctrl Enter
Noticed oshЫbku Highlight text and press. Ctrl + Enter
We are
China named several good reasons for the introduction of Russian troops into Belarus
"A beautiful sight": the Chinese about anarchy and unrest in the United States
Reporterin Yandex News
Read Reporterin Google News
1 comment
Information
Dear reader, to leave comments on the publication, you must sign in.