Why Warsaw is betting on the deterioration of relations with Moscow 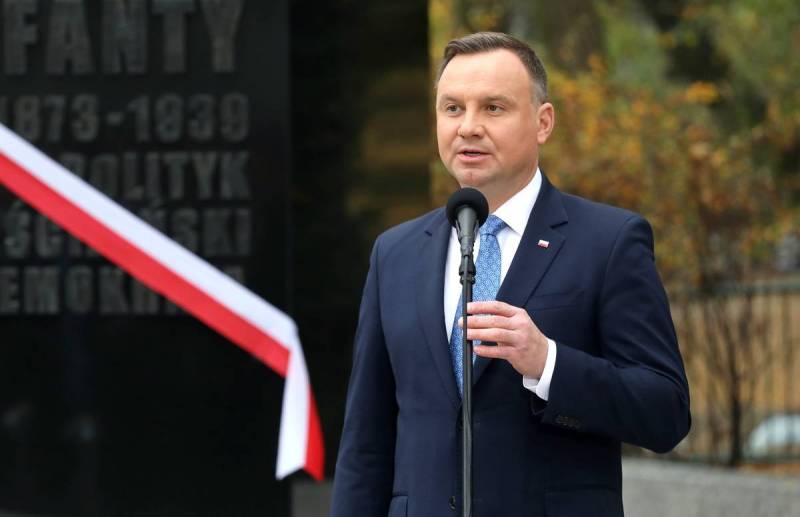 On May 26, during a visit to the EU observer mission in Georgia, Polish President Andrzej Duda called Russia "an abnormal aggressor country." He also accused Russia of aggression and violations of international law.

Russia is not a normal country, it is not a country that behaves normally; she is an aggressor state
- said Duda, noting that Russia's actions "lead to the destruction of states, lead to a situation of war, when people are killed or injured."

In addition, the head of Poland stressed the need for "decisive action by the international community", noting that next year Warsaw will take over the chairmanship of the OSCE and will certainly try to raise these issues in the international arena.

We will talk about these issues, we will raise them at the UN General Assembly or at the UN Human Rights Council
- Duda threatened.

It is important to note that such rhetoric does not come from an analyst or expert, not from a marginal opposition policy, but from the first person of the Polish state - the current president. Moreover, this is not an accidentally dropped phrase, but part of the planned and consistent policy pursued by the Polish authorities in recent years.

Poland's geopolitical ambitions have always been extremely high, although it is still far from the full-fledged status of at least a regional power. The main goal of the Polish leadership is to build a new (fourth in a row) Rzeczpospolita, and an aggressive foreign policy position fully fits into this image.

Polish politicians are now demanding reparations from Germany, now talking about the Soviet "occupation", now trying to get as close as possible to the Americans - the doctrine looms quite clearly. And insults and accusations are used in it as a means of attracting attention - as much as the Polish leadership would not want otherwise, but Poland's place on the international agenda is far from being in the forefront. There are several reasons for this: both the geographic location, and the level of economic development that is far behind the West European level, and the vector of state policy, including. The Polish foreign policy position of recent years is so secondary, and its desire to please the United States and NATO in everything is so obvious that it is sometimes unclear how the politicians who develop it manage to win the elections at all. Especially taking into account the frank "tightening the screws" within the framework of the domestic policy.

Although winning is loudly said. In the presidential elections in summer 2020, Andrzej Duda was never able to obtain the required majority in the first round. And in the second he won only 51% against almost 49% of the opposition representative Rafad Tshaskovsky. The victory by a margin of only 2%, given that Duda is a representative of the ruling Law and Justice party, which seeks to consolidate its power at any cost, looks at least controversial.

Moreover, after the announcement of the results, the opposition Civic Platform bloc, from which Tshaskovsky was nominated, filed a complaint with the Supreme Court to declare the elections invalid. Among the main reasons were the widespread use of administrative resources and state media by Duda, as well as numerous violations during the voting, revealed throughout Poland.

However, these claims were rejected. Of the nearly 93 complaints of Polish voters about violations during the presidential elections, the Supreme Court of Poland recognized only XNUMX as legitimate, noting that they did not have a decisive influence on the electoral process. Also, the resolution of the highest judicial body in Poland emphasized the vagueness of the wording and the lack of tangible evidence in the complaint of the opposition representatives.

It would seem that the legal decision of the highest court of the state, which is part of the European Union, should have removed all questions. Democratic values, including the right to an independent and fair court, are one of the fundamental values ​​in the EU. But all this does not apply to Poland.

The reform of the judicial system, carried out by the Polish authorities in 2017 as one of the measures to implement the “conservative revolution”, introduced additional disciplinary liability for judges. Including for actions of a political nature. According to representatives of the Polish opposition, judges who did not suit the official Warsaw all over the country were forced to resign.

Of course, this could not pass by the attention of Brussels.

“The Assembly condemns the campaign of intimidation carried out by the political authorities against some critical judges and against the justice system in general, as well as the lack of protection measures for judges falling under this campaign. Such behavior is unworthy of democracy and the rule of law, "- this was the resolution made by the deputies of the Parliamentary Assembly of the Council of Europe in January 2021 with regard to Poland.

In fact, they admitted that the pressure on Polish judges is precisely from the executive branch, whose head, in accordance with the Polish constitution, is none other than the president. And even if ordinary Polish judges are "intimidated", what can we say about the Supreme Court, which decides the most important issues for the country. Undoubtedly, preparing for the elections, the Polish authorities have decided in advance all the issues related to it in order to ensure that the decisions they need are carried out.

Thus, the decision of the Supreme Court, which confirmed Duda's victory in the elections, in principle cannot be legitimate, because the court itself, in fact, is under serious and unlawful pressure from the executive branch of government. In complete violation of the key democratic postulate - the principle of separation of powers.

All this leads to the fact that Poland is now ruled by an illegitimate president and his statements must be perceived primarily through the prism of this status. Moreover, he himself understands this very well and strives to shift the attention of the Polish voter from domestic to foreign policy as much as possible.

To this end, he is ready to continue to provoke Russia, flirt even more with NATO, and even incite a revolution in a neighboring country. So the President of Belarus Alexander Lukashenko in August 2020 said directly that "Duda won in Poland by rigging the elections." In addition, he noted that the political crisis in Poland that began as a result of the presidential elections led to the fact that the Polish authorities wanted to "shift the arrows" to Belarus.

Political crises and protests have become the norm for Poland in recent years. Harsh and harsh reforms carried out by the Law and Justice Party led to the fact that the first large-scale demonstrations began just a year after its victory in parliamentary elections. For example, in October 2016, thousands of women across Poland took to the streets as part of Black Monday, a nationwide protest against attempts to ban abortion. "My body belongs to me, not to the state" - the slogan with which Polish women tried to defend their rights. As it turned out, Law and Justice had completely different rights and completely different justice.

A year later, in December 2016, Poland was rocked by new protests. Then the reason was the decision of the Polish parliament to restrict the work of the press in the building of the Seim. Journalists were simply denied access to the meeting room, leaving only the possibility of observing the video broadcast. For a month, opposition representatives protested against the decision both on the streets of Warsaw and in other cities. To no avail. Interior Minister Blashchak accused them of trying to seize power, and Prime Minister Shidlo - of unwillingness to admit defeat in the elections.

However, as it turned out in October 2020, in terms of scale, the previous protests were only the beginning. After the Constitutional Court of Poland, under pressure from the authorities, nevertheless decided on an almost complete ban on abortion, more than 2 thousand protesters took to the streets of less than 150 million Warsaw. According to a study by SW Research, the overwhelming majority of Poles - over 70% - were against the law.

Moreover, rallies and demonstrations were repeated again in January 2021. Moreover, the protest movement began to quickly develop into anti-government actions. The protesters began to demand the resignation of the government and the president louder and louder. Significantly, in the course of the first protests five years earlier, even the first post-communist President of Poland Lech Walesa, who had moved away from politics, had called for Dudu to step down.

The ruling party feels that it may lose power on the wave of popular discontent and is trying to stifle the protest agenda. The course pursued by Law and Justice is as far from democracy as it is from respect for human rights. This is understood both in the EU and in Poland itself. But Brussels, mindful of Brexit and considering Warsaw's Eurosceptic sentiments, is afraid to provoke a "parade of sovereignty" in relation to the countries' membership in the European Union. It is easier for the EU to turn a blind eye to the complete trampling on "European democratic values" by limiting itself to formal statements and claims and flooding Polish ambitions with billions of subsidies. The Polish government, on the other hand, is completely satisfied with the policy being pursued - it is driven by the desire to satisfy political ambitions and build what, in the understanding of its leaders, will become a “strong Polish state”.

They say that every nation has the government it deserves. So it is important to understand that the current leadership of Poland in the person of "Law and Justice" has the support of a little more than 40% of voters. The presidential elections were rigged, and in the opinion of the Poles themselves. The Supreme Court, like the entire judicial system, has been compromised - already in the opinion of the EU. The Polish domestic political agenda is steadily moving towards toughening and defeating the rights of citizens. As a result, everything goes to the fact that socialist Poland of the times of the Internal Affairs Directorate and the USSR will be much freer and more democratic than modern Poland.

The attacks from Polish politicians are simply better not taken seriously. They deliberately provoke Russia in order to once again distract their people from discontent and protests, and the backlash plays into their hands. Obviously, the time has come in the world when presidents more often throw insults than issue decrees. Well, as Vladimir Putin correctly noted in relation to Joe Biden's words, "Whoever calls his name is called that." This is also quite applicable to the statements of the Polish "president" Duda. But he will still have to answer for the "aggression and abnormality" of his policy, but this time to his people.
Ctrl Enter
Noticed oshЫbku Highlight text and press. Ctrl + Enter
We are
Who actually won the Cold War and what the future holds for the world
Ten "defeats" of Putin
Reporterin Yandex News
Read Reporterin Google News
7 comments
Information
Dear reader, to leave comments on the publication, you must sign in.