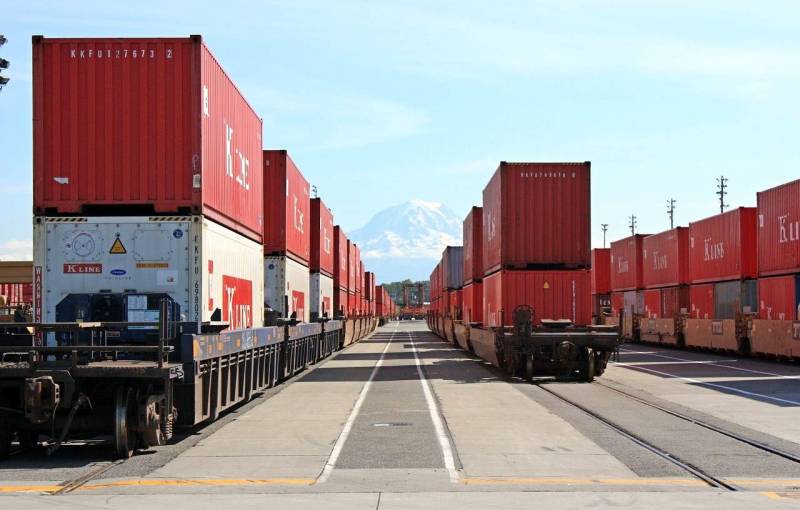 The conflict between the West and Belarus is developing according to the worst scenario for Minsk. Now, not only the respected news and analytical agencies Bloomberg and Reuters write about the possibility of introducing a complete transport blockade, with links to their sources, but also speak in the EU at the official level, in the administration of French President Emmanuel Macron. Note that while there was no international trial, no guilty verdict was issued, which could become the basis for such restrictive measures. But why is everything happening so inadequately harshly, where are the famous Western liberal-democratic values?


According to preliminary data, Belarus may find itself in a complete transport blockade from the “other side”, both air and ground. At the same time, the movement of not only passenger, but also freight transport will be limited, which is of fundamental importance for our further reasoning. Both Belarusian export flows and transit flows passing through its territory can be banned. Let's dwell on this in more detail. Literally the day before we told on how the United States will put obstacles in the way of the construction of the "New Silk Road" in order to limit the export potential of its main competitor, China. And this is already happening right before our eyes.

Why does Beijing need this land-based "New Silk Road" at all? It is much easier to load giant bulk carriers with containers and ship them by sea. This is easier and much cheaper in terms of logistics. However, geopolitics intervened. In 2014, the PRC crossed the "red line", becoming the second the economy the world. The Americans, with a great delay, began to try to slow down the development of the Middle Kingdom, 70% of whose exports go through the South China Sea. At the same time, Beijing has territorial claims and is in disputes with all its neighbors in this key region for itself. The United States stepped up support for potential opponents of China, and the PRC was forced to respond with a large-scale naval building program and the creation of its own aircraft carrier strike groups. However, the problem is obvious: Washington could create great difficulties for Beijing with the export by sea, undermining its foreign trade. Awareness of such a bleak prospect prompted the Chinese Communist Party to start implementing a project for a land transport corridor from Asia to Europe.

Note that the Celestial Empire did not put all the eggs in one basket, but began to simultaneously lay several alternative routes at once, in the southern, northern and middle directions. At the same time, Chinese investors acted in their traditional style, investing in infrastructure with tied loans and actively promoting their national interests in the countries where they came. And now artificial barriers are being erected in front of the New Silk Road. Thus, in 2012, Beijing signed an agreement on cooperation in the "17 + 1" format with the Baltic and European states. It was assumed that the PRC will invest billions of dollars in the development of roads and railways, the construction of seaports and airports. However, a week ago Lithuania withdrew from this agreement with the following wording:

There is no such thing as "17 + 1" anymore, because Lithuania is absent there.
Why is there so much pathos in the leadership of a small impoverished country, which should almost pray for Chinese investments? Now they are talking about following this step in Estonia and Latvia. It would seem that it is another geopolitical madness that only the Baltic republics are capable of. But no, there is still a certain logic. Vilnius believes that China should now negotiate not separately with each country separately, but with the general leadership of the European Union. It is clear that the legs grow out of Washington, which will be able to pull the strings of loyal Brussels bureaucrats, putting obstacles in the way of the Chinese infrastructure project.

What has Belarus to do with it? Moreover, “Old Man”, within the framework of its notorious “multi-vector approach”, has entered the project of the “New Silk Road” in order to show Moscow its independence. This is how Nikolai Snopkov, Deputy Head of the Presidential Administration of the President of the Republic of Belarus for Economics, commented:

Belarus is a logistics crossroads. We are located on key transport routes linking Western Europe with the East, the Black Sea coast with the Baltic Sea countries. Today, a dry port and an integrated logistics center are being actively created on the territory of the Great Stone Chinese-Belarusian Industrial Park. Two nodal sites of the Silk Road economic belt are obvious: the Urumqi district in the Xinjiang Uygur Autonomous Region of the PRC and Belarus.

It was believed that up to 10% of the entire Chinese-European trade flow would be able to pass through Belarus. Under these unheard-of profits, the Great Stone Chinese industrial park was built near Minsk. This is a special economic zone, the participants of which were provided with large tax breaks and preferences. However, in fact, instead of a center of advanced technological development and production, the Great Stone has turned into a huge offshore transshipment center for Chinese consumer goods that transit to EU markets. Well, who would have doubted.

In fact, President Lukashenko has turned his country into a "bottleneck" in one of the key areas of the New Silk Road, into a Chinese trade enclave at the junction of the Eurasian and European Economic Unions. And now, using a convenient pretext, the United States is closing it down through its puppets. As we can see, it is not always possible to endlessly balance between the interests of the West and the East and play “multi-vector”. Even Alexander Grigorievich, who has a good "political stretching ".
Ctrl Enter
Noticed oshЫbku Highlight text and press. Ctrl + Enter
We are
Peace enforcement operation. Russia inflicts a preemptive strike on Kiev
US Global Economy: An End That Sneaks Noticeably
Reporterin Yandex News
Read Reporterin Google News
7 comments
Information
Dear reader, to leave comments on the publication, you must sign in.