Sly Miller and sly Putin. Who won the delay in the launch of Nord Stream 2 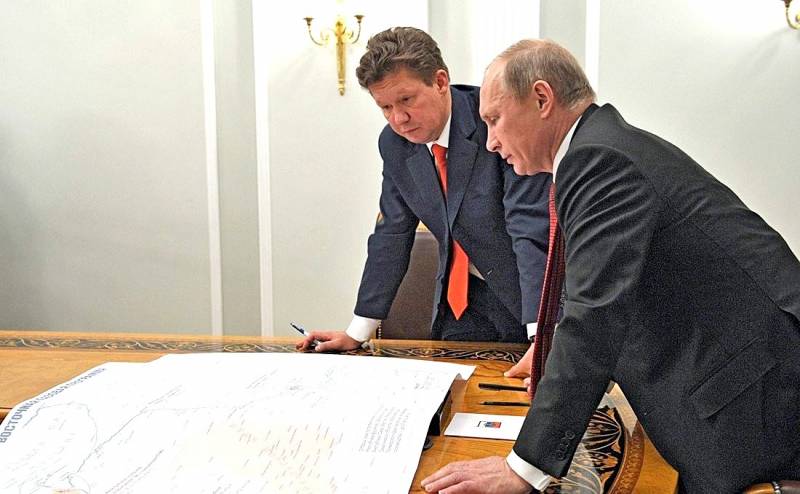 В previous text I told how the clever Biden wooed the US Congress, playing into the hands of Moscow (who is their Kremlin agent, I am already at a loss, it seems that they have this position passing along with the keys to the Oval Office). In this present I will tell you how Gazprom got used to this business. Believe me, the story is not only fascinating, but also instructive.

I'll start a little from afar. On May 15 this year, for the first time since Eurostat has been keeping statistics, a very extraordinary event happened: the price per thousand cubic meters of natural gas at the TTF hub (Holland) exceeded the prices of mid-January. Then, during the period of an abnormally cold winter for Europe, they reached the mark of $ 342 / thousand cubic meters, but now, during the period of an abnormally "warm" spring, they went off scale for the mark of $ 348 / thousand cubic meters. "What nonsense?" - thought Stirlitz. Frau Merkel thought the same thing. The fact is that in early April (1-2 days) European gas traders usually started filling their underground gas storage facilities (UGS), preparing for the next heating season, taking advantage of low fuel prices, which were usually established by that time. In the same anomalous year, when the cold winter of 2021 smoothly flowed into the cold spring of 2021, the amount of gas taken from the storage facilities exceeded the amount pumped in the opposite direction until the third decade of April. The situation changed for the better only on the 20th, and the excess in favor of the injection turned out to be purely symbolic - only 0,1%. The reason is trivial to tears - there is no gas, and it is expensive. Moreover, it is in this sequence - it is expensive, because it does not exist. How did Europe come to this life?

The explanation is also trivial and it lies in the recent past. Throughout 2019, against the backdrop of the confrontation between the Russian Federation and Ukraine over the transit agreement between Gazprom and Naftogaz for the supply of Russian gas to the EU, Europe, not knowing how it would end, was filled with Russian gas for future use, clogging all its own and Ukrainian underground gas storage facilities under the neck. The year 2020 has come. The agreement, thank God, was signed on December 31, 2019, but the year was not only abnormally warm, but also coronavirus, gas consumption fell along with the price of it. For those who have forgotten, let me remind you that exactly a year ago the price per thousand cubic meters of gas at the same Dutch TTF hub dropped to $ 100 and even lower. Which immediately allowed Ukraine to complain to its grown-up uncles about Gazprom, how bad it is, how he mocked it, having previously supplied it with its aggressor gas at a price of $ 425 / thousand cubic meters, which even with a $ 100 discount for finding an enemy fleet on its territory (remember those famous Kharkiv agreements of Yanukovych?) Was 325 dollars / thousand cubic meters, which is the limit of Russian obscurantism against the background of real 100 dollars. But now, thank God, she has thrown off this yoke and since 2015 she has been buying European democratic gas with atoms of freedom for his real money, without overpaying to the vile aggressor. Let's leave it out of the brackets that the country of zhovto-blakitny benches bought the same aggressive gas only more expensive, overpaying for a non-existent virtual reverse. Gazprom actually suffered losses. And although 40% of its gas was supplied to Europe under long-term contracts with a fixed price pegged to the price of a barrel of oil, it still sold 60% on the spot market, and there the price did not please either Miller or Putin.

What was the Kremlin to do? Let's also launch SP-2 sooner in order to further increase the supply and thereby lower the gas price even lower. How many reproaches Putin has listened to that he is a fool, how Trump threw him from the SP-2, and how will everyone who wants to wipe their feet about him now? There even a queue of people wishing to wipe their feet lined up, and Poland and Lithuania asked that they no longer be borrowed. You remember this round-the-world odyssey of "Academician Chersky" around Africa, across the Pacific, Indian and Atlantic oceans, accompanied by convoy warships, calling at all possible ports. It would seem much easier to launch it through the Northern Sea Route, which is two times shorter, and would save both time and money. But the "stupid" Putin was in no hurry for something. In the meantime, the fierce year 2021 has come, with its severe frosts. And the heat-loving Europe began to freeze slightly, no joke, the frosts dropped to -15 * C (in Spain to minus 1 * C). This is a real cataclysm! Last winter, the EU set a record for the extraction of gas from its underground storage facilities - 69,5 billion cubic meters, this has never happened before! Gazprom conscientiously, but without fanaticism, fulfilled its contractual obligations, supplying the agreed volumes of gas to its European counterparties, surpassing the same figure for the last year by as much as 30%. Moreover, going to meet his customers, blatant that they are freezing, he even exceeded the supply figures stipulated in the contracts, buying additional capacities for gas transit from his Ukrainian non-brothers (you have not forgotten that under the contract between him and Naftogaz, he must and can pump through the Ukrainian pipe no more and no less than 40 billion cubic meters / year, and for every extra cubic meter of gas, a multiplier with a coefficient of 1,2 is switched on over this figure; if you want to download, download, but pay 20% more, and Gazprom paid).

At the same time, no one lifted a finger to save the freezing heat-loving burghers. Neither Algerians, nor Norwegians, nor Qataris, not to mention the Americans. Physically, there is no gas, and the one that is, they drove the caravans of gas carriers to the east, to the freezing region of northeast Asia, where, against the background of unprecedented frosts for those regions (at minus 18 * C), all their wind and solar stations froze (due to the complete icing) and the gas price jumped to a record $ 1100 / tcm. Well, where is Europe with its $ 340 / thousand cubic meters? In the coffin, we saw her wearing white sneakers! That's literally what they said. Nothing personal, as they say, it's just business. No wonder the classic said that the capitalists would sell their own mother for 300% of the profit. So they sold it! As a result, Merkel said: “I saw this LNG of yours in the grave! SP-2 will be, no matter what you promise me! " And they do not promise anything, now that the price for gas in the EU has been set at around $ 348 per thousand cubic meters, they are still driving their gas carriers to Southeast Asia, where the price for gas is $ 30-35 more expensive.

The laws of physics cannot be fooled. If a certain amount of gas can be driven through the pipe section, then Gazprom cannot supply more than it will fit in (or, in the case of Ukraine, it does not want to, and what claims to it there may be, 40 billion cubic meters according to the contract must drive out - drove away, and more, excuse me, it's expensive, the prices are fixed for you, no one works at a loss, not even Gazprom!). Moreover, thanks to the cunning of its managers and the Kremlin's foresight with the delay in the construction of the SP-2, Gazprom's not so far-sighted European counterparties are now forced to pump gas into their empty UGS facilities at a price of $ 348 / thousand cubic meters. Or wait for the launch of the SP-2. Gazprom has no other possibilities to increase the supply on the pipe gas market and thereby bring down the price. Frau Merkel understood this a long time ago, so she stands as a mountain behind Nord Stream 2. Miller, on the other hand, calculates the unexpectedly collapsed profit, because Gazprom put the price in the 2021 budget at $ 171 / thousand cubic meters, and now it is exactly 2 times higher. Don't know why? And even though Gazprom supplies 40% of its supplies at fixed prices (according to the traditional Groningen model, pegged to the oil price), it still sells 60% of its gas on the spot market, and according to the requirements of the 3rd energy package, the EU calls on its members to move away from long-term contracts to the spot, which Gazprom, calculating its unexpectedly dumped profits, is only glad.

By the way, in defense of SP-2, I must say that the laws of physics can still be deceived, and more gas can be pumped through an equal section of the pipe. You just need to increase the pressure. The new gas pipeline provides a pressure of 120 atmospheres, in contrast to the central corridor, the main gas pipelines of which are designed for an operating pressure of 55-75 atmospheres. The central corridor includes not only the Ukrainian GTS, but also the Yamal-EU gas pipeline (and the SP-2 is directed rather against it than against the Ukrainian route). The Ukrainian route, in contrast to the SP-2, is also 1,5 times (2 thousand km) longer, and everyone who knows how to count their money will easily understand why the Russian Federation is so stuck in it. For a recipient of Russian gas in Europe, this also translates into a very tidy sum, given that the tariff for pumping gas through the Ukrainian GTS is one of the highest in Europe ($ 32 / thousand cubic meters). I don’t even want to talk about such a trifle as the carbon footprint (which is why all supporters of Greta Thunberg are so killed), for SP-2 it is 2 times lower than that of Qatari LNG, and 4 times lower than that of LNG from USA and Australia.

Why SP-2 is directed not against Ukraine, but against Poland, I will tell in the next text (sorry, it didn't fit here). This is "generally epic"! It seems that the Polish non-commissioned officer's widow whipped herself. Well, who is her doctor ?!
Ctrl Enter
Noticed oshЫbku Highlight text and press. Ctrl + Enter
We are
Europe has fallen into the binary "gas trap" of Russia
The hidden role of Nord Stream 2. Russia will leave Poland without gas
Reporterin Yandex News
Read Reporterin Google News
11 comments
Information
Dear reader, to leave comments on the publication, you must sign in.