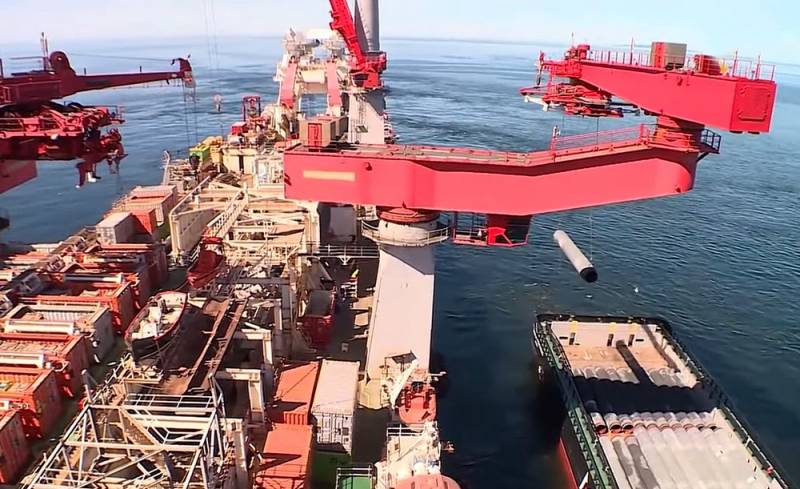 Some News in one line: 1) Germany allowed the construction of the Nord Stream 2 to continue; 2) the Biden administration decided to abandon sanctions against SP-2 (the American agency Axios writes about this with reference to two sources at once, informed about the decision of the head of the White House, the wording is contrary to national interests); 3) The US State Department intends to impose sanctions against four ships that are building Nord Stream 2 (this is reported by Politico, citing its own sources); 4) SWIFT confirmed to the Central Bank that there are no risks of disconnecting Russia from the system. This was stated by the 1st Deputy Chairman of the Central Bank Olga Skorobogatova during a meeting of the working group of the State Duma Committee on the Financial Market; 5) The German Foreign Ministry confirmed the refusal by the United States of sanctions against the operator of the SP-2 gas pipeline Nord Stream 2 AG and its general director, a citizen of the Federal Republic of Germany, Matthias Waring; 6) Trump's party submitted to Congress a new bill on total sanctions against Nord Stream 2; 7) The US Treasury Department imposed sanctions against 13 Russian ships that are laying the Nord Stream 2 gas pipeline. Also, four organizations from the Russian Federation were included in the sanctions list. At the same time, the sanctions list does not include the operator of the Northern Channel-2, as well as other German companies that are associated with the project.


Does nothing on this list bother you? I have only one question, what does the new Republican bill against Nord Stream 2 do there? Indeed, until now, sanctions against SP-2 were the prerogative of the Democrats, and the Trumpists resisted this as best they could. The leader of the Republicans in the Senate, Mitch McConnell, was even nicknamed Moscow Mitch for this (for his inexplicable love for the Kremlin). From this we can draw an obvious, but paradoxical conclusion - Russophobia in American politics is not purposeful. policies White House, but serves only as an instrument of internal political struggle. For a long time, the United States has not seen Russia as an enemy that threatens American domination, with which it is necessary to purposefully fight as a top priority. Under Trump, the Kremlin's agents were Republicans. Under Biden, the Democrats took their place. As they say, nothing personal - the law of conservation of energy. The cycle of Russophobia in nature.

Feint ears with US national interests

Biden considered that the sanctions against the operator of the "Nord Stream-2" Nord Stream-2 AG and German gas consumers are contrary to national interests. Friendship with the FRG for the United States turned out to be more important than the war with the Russian Federation. Biden is rebuilding Trump's shattered relationship with major allies. And he has not yet met with Putin! It is possible that, in the name of national interests, he will not wipe himself up with Ukraine (I myself don’t believe in this, but what the hell is not joking? It’s important what he will demand in return). But the issue with Nord Stream 2 is closed. There is nothing more on the way of its completion. At least for the next 90 days. For those who are not in the know, I report that the State Department reports to Congress on the implementation of the laws it has passed once a quarter. He will have to report on his next steps in this direction only in September. By that time, the construction of the SP-2, I think, will have already been completed with a probability of 120%. As of the current moment, TUB "Fortuna" on the "B" branch has already finished laying pipes in the Danish section and switched to German (there she has to lay 13,6 km, at a laying speed of 1,21 km / day, consider yourself!). On the "A" line of the KMTUS "Akademik Chersky" in the Danish exclusive economic the zone still needs to go about 63 km, and on the German section, finish off the remaining 14,4 km (at a laying speed of 3,15 km / day, this is for a month of work, even in very bad weather). Now it is calm on the Pomeranian coast, the brigades are working tirelessly, fines are provided for disrupting the laying schedule. Everything suggests that by the time Frau Merkel surrenders her powers on September 26, 2021, SP-2 will be completed. We will see how Putin will bypass possible problems with its certification, licensing and commissioning. I think that gasket firms with a charter capital of $ 1 and a staff of two people will appear again.

We have already seen how "harshly" the Americans dealt with Umka and 12 other Russian courts that fell under the sanctions of the State Department. How they politely bowed to the Federal State Budgetary Institution "Marine Rescue Service" (MSS), participating in the project, too. For those who are not in the know, I report that the US Treasury punished the MCC and any organization where it owns 50 or more percent of the shares, only for SP-2 and TP (Turkish Stream), leaving other types of its financial activities outside the zone of application sanctions. Everything has been said about Putin's friend, a former employee of the Stasi (Stasi is the secret police of the GDR, an analogue of the KGB), and now the director of Nord Stream-2 AG. Okay, even if Matthias Waring is a citizen of the Federal Republic of Germany, with which Biden does not want to quarrel, but the operator company Nord Stream-2 AG itself is registered in Swiss jurisdiction. Is Biden also afraid of ruining relations with Switzerland?

How Biden bypassed the law of the US Congress, this is "finally a separate spot"! I myself thought (and wrote about it) that this is impossible. Sanctions against SP-2 were carried out by amendments to the US Defense Budget for 2021, for which both houses of Congress voted on January 1, 2021, overcoming the president's veto for this (which happened for the first time during the Trump administration). Biden was put in a situation where, in order to repeal this law, it was necessary to pass a new one, because the laws of Congress are not regulated by presidential decrees, and in Congress there is complete consensus on this matter - both "elephants" and "donkeys" with all their hooves (or that there they still have) were for sanctions against the hated Russia. If at the same time Germany also suffers, then the "elephants" were also satisfied (which we immediately saw!), Even allies are drowned in the struggle for survival, expensive gas will make European products uncompetitive in comparison with the products of American manufacturers (and the Germans are competitors to Americans , primarily in the American domestic market). In the situation of the global world crisis of the entire capitalist system, only one can survive, and it is somehow even stupid to accuse the Republicans, who stand up for the priority of national interests, that they want the United States to be this one.

For all Biden's love for Frau Merkel, the situation was hopeless. So it seemed to me. I never imagined that the White House could ignore the law of the US Congress, citing national interests. However, it turned out that nothing is impossible in this world. The State Department has beautifully handled the US Congress, vowing that the next time will return to this issue no later than 90 days, when the SP-2 is already completed.

Who scared us with the evil and vengeful old man Biden? In fact, the old man turned out to be a kind-hearted man. That's when Alzheimer's help. Remembers nothing! What kind of Ukraine? .. I don't know. And where is it? .. What kind of Poland? .. Our friend? So what? .. What kind of "Nord Stream-2"? .. I don't know anything. Yes, God bless him. Let it be ... Putin? Russia? .. I remember these. Scary people, wild country, hypersonic missiles. We need to negotiate, otherwise it will be too late ... So it turned out that if for Putin SP-2 is a matter of political prestige, then for Biden it is nothing more than a bargaining chip.

Gazprom did not want to speed up its construction at all. Purely economically, it turned out to be even more profitable for him. You will laugh, but it is. The situation has developed in such a way that Russia can abandon the Ukrainian GTS even without SP-2. Moreover, in connection with the drop in production as a result of the systemic crisis complicated by the coronavirus infection, gas consumption in Europe has decreased. And it is not known whether rapid growth will follow this, since the EU is actively adopting regulations blocking hydrocarbon energy, declaring its stake on the development of hydrogen and other types of "green" energy. It looks, at least, strange, because the EU is erecting artificial obstacles on the way of hydrocarbon carriers to the European market, while having no alternative to them. If this suicidal policy continues, then some of the existing and emerging gas delivery capacities may turn out to be in general excessive.

In this sense, LNG, although more expensive than pipeline gas, makes it easier to maneuver in the directions and volumes of supply. In addition, Russian LNG is still cheaper than competitors. Gazprom has already hinted to its European partners that it is ready to abandon the SP-2, since the partners themselves treat the project as if only it needs it. At the state level in the EU, only Germany defended the SP-2, and even then not always consistently. The rest pretended that it was none of their business, and that not their French, Austrian and other companies were involved in the project.

However, the Kremlin almost immediately disavowed these timid hints from Gazprom. Which once again confirmed the fact that the political and economic components of the project were at least equal in importance for the participants in the global confrontation. If Gazprom, based on purely economic preferences, at the moment would not mind to mothball the construction site and wait until better times, then for the Russian Federation, as a state, such a decision is in fact unacceptable. Because all over the world it will be perceived as a defeat for Russia in a direct confrontation with the United States. Accordingly, not only the political authority of the Kremlin will be undermined, but also the possibilities for the development of trade and economic cooperation, and not only in the European direction. Therefore, Putin is undoubtedly glad that the decision to complete the SP-2 was successfully pushed through. He kept his promises to Frau Merkel.

How Gazprom got "boiled over" at the same time, will be discussed in the next text. To be continued.
Ctrl Enter
Noticed oshЫbku Highlight text and press. Ctrl + Enter
We are
The world is preparing hard to abandon SWIFT
The fate of Russian banks in SWIFT is decided
Reporterin Yandex News
Read Reporterin Google News
45 comments
Information
Dear reader, to leave comments on the publication, you must sign in.