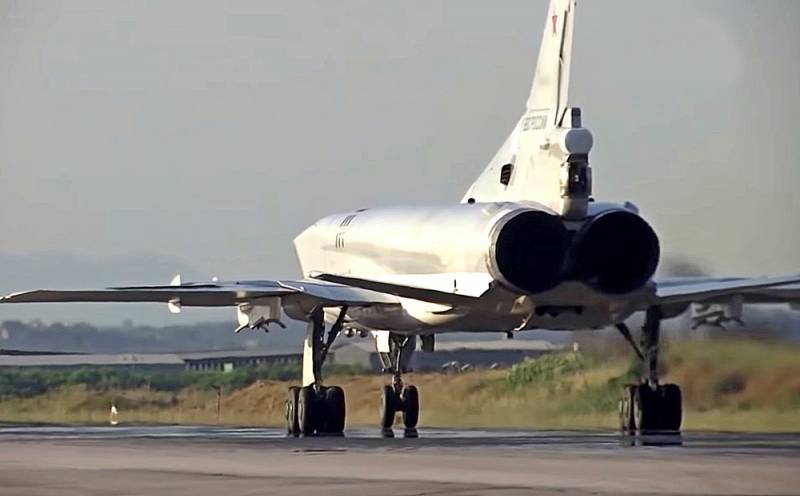 It is reported about the transfer of supersonic long-range aviation bombers Tu-22M3 to the Russian Khmeimim airbase. Domestic media immediately exploded with suggestions that the Russian Defense Ministry was "taking aim at the southern flank of NATO," preparing some kind of large military operation in the Middle East, or training to sink the Sixth Fleet of the US Navy. But is this so, and what are the real goals of the Russian military department?


Obviously, our Ministry of Defense has taken the idea of ​​redeploying supersonic missile carriers to Syria quite seriously. To do this, at an accelerated pace, in just a few months, the runway at the Khmeimim airbase was lengthened, strengthened and modernized. Now its length exceeds 3 kilometers, and it can be used by Russian military aircraft of all types, including heavy ones. Now combat missions in the Syrian Arab Republic are performed by Su-25 attack aircraft, Su-34 fighter-bombers and Su-24 front-line bombers. Now they will be strengthened by the Tu-22M3 Long-Range Aviation. What kind of planes are these, and why have they received such increased attention, which has generated a lot of speculation?

This is a long-range supersonic bomber-bomber, a carrier of nuclear weapons. The Tu-22M3 is a very formidable combat aircraft, a functional analogue of which only the United States has. It is capable of striking with X-22 and X-32 anti-ship cruise missiles, free-fall bombs and dropping sea mines of various calibers, which can take on board up to 20 tons. Due to its outstanding tactical and technical characteristics, the Tu-22M3 received the name “aircraft carrier killer”, since the fight against the enemy's AUG was its main goal as part of our Naval Missile Aviation. Also, a supersonic bomber can carry long-range missiles equipped with thermonuclear warheads. After modernization, the aircraft is capable of delivering strikes with hypersonic Dagger missiles.

Yes, it is formidable, but what can really change in such a complex region as the Middle East, just three Tu-22M3s? This is a very important question, so let's turn our attention to the wording of our military department:

Crews of long-range bombers will acquire practical skills in practicing training tasks in new geographic areas during flights in the airspace over the Mediterranean Sea.
After all, the Mediterranean. And who is based there? That's right, the US Sixth Fleet, as well as the ships of NATO countries, and the Turkish navy, which can be conditionally considered a separate entity, given the extremely active and independent foreign policy Ankara in recent years. Several crews will work in shifts on each Tu-22M3, pilots will gain experience in flying over the Mediterranean Sea, onboard radars will take pictures of coastal landmarks. Our pilots will improve their combat proficiency, trying on potential targets, which in this region are even too numerous. Why is this so important?

Because, if desired, this redeployment of the Tu-22M3 squadron to Syria can be considered the first step towards the revival of the Naval Missile Aviation, liquidated in 2011. The fact is that the importance of this type of troops in modern Russia is extremely underestimated, and completely in vain. The experience of the Second World War showed that 121 aircraft carriers out of 91 were sunk and damaged in aggregate. During the Great Patriotic War, the naval aviation of the USSR Navy damaged and destroyed 1569 enemy ships and vessels out of 2272.

Its purpose is to search, detect and destroy the combat forces of the enemy fleet, its landing detachments, convoys and single submarine or surface ships. According to the base, naval aviation is divided into shipborne and coastal. By type, it is subdivided into anti-submarine, fighter, reconnaissance, auxiliary, and naval missile-carrying. After the collapse of the USSR, naval aviation fell into decay due to a decrease in funding and logistics. Much of the combat equipment was decommissioned, many airfields located abroad had to be abandoned. The flying hours were reduced, the level of training of the pilots dropped dramatically. The matter ended with the fact that the naval missile-carrying aviation was generally eliminated as a branch of the military, and the supersonic bombers Tu-22M3, "aircraft carrier killers", were transferred to the Long-Range Aviation. Needless to say, all this had an extremely negative effect on the combat effectiveness of the domestic naval aviation, which can largely compensate for the weakness of the surface component of the Russian Navy?


In this regard, let us pay attention to the latest actions of our Ministry of Defense. A powerful air base has been created in Syria with a modern runway capable of receiving the heaviest aircraft, including the supersonic Tu-22M3 and anti-submarine Tu-142. By redeploying the "aircraft carrier killers" from Mozdok to Khmeimim, Sergei Shoigu's department actually turned them from long-range bombers into naval missile carriers aimed at the Mediterranean region. Only three aircraft, no matter how powerful they are, are not able to put the southern flank of NATO on their ears with their "Daggers". However, by working in shifts, their crews will gain valuable hands-on experience in flying over a potential theater of war. Note what the Tu-22M3 is armed with: these are long-range anti-ship missiles Kh-22 "Tempest". What does this indicate? Of course, about the direction of these informal exercises against the US Sixth Fleet and American allies in the region.

In fact, the RF Ministry of Defense turned Khmeimim into a foreign airbase, where it began to rapidly train its pilots of naval missile-carrying aviation, the actual revival of which can already be spoken of with caution. And this is a step in the right direction, which should be followed by the development of new anti-submarine aircraft and the general expansion of the aircraft fleet.
Ctrl Enter
Noticed oshЫbku Highlight text and press. Ctrl + Enter
Reporterin Yandex News
Reporterin Yandex Zen
16 comments
Information
Dear reader, to leave comments on the publication, you must sign in.