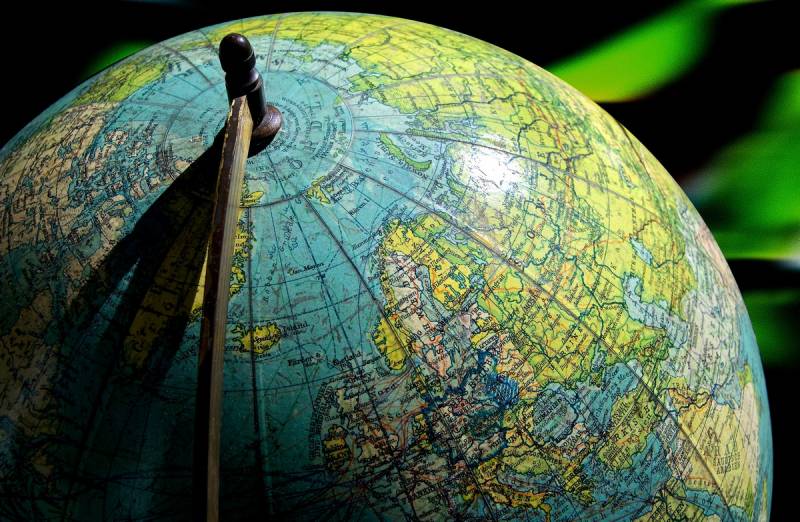 On May 24, the head of the European Commission, Ursula von der Leyen, during a press conference dedicated to the results of the first day of the EU summit in Brussels, spoke on the topic of relations between Russia and the European Union.

Russia is our largest neighbor, Russia and the EU are closely linked, remain neighbors and important trading partners. Russia is an important player in solving global challenges. Therefore, we asked the head of diplomacy Josep Borrell to present a report on Russia and look at relations with it in the light of this report.
- emphasized von der Leyen.

The head of the European Commission also noted that "Russia is challenging the values ​​and interests of the European Union through sabotage, disinformation and cyber attacks." The usual, if not to say, the on-duty attack is another tracing paper from the words of American politicians against the background of words about connections and partnerships, it looks somewhat strange. Especially when you consider that the latest initiative to normalize relations between the Russian Federation and the European Union comes from the latter. After all, this is the third time in four months that the EU has tried to mend relations with Russia. Clumsy, arrogant, contradictory, but trying.

So, in early February, the head of European diplomacy, Josep Borrell, paid an official visit to Moscow. The purpose of the trip was to assess the interest of the Russian authorities in normalizing relations with the EU. However, Borrell then came to demand rather than negotiate, so it is not surprising that the negotiations ended in almost nothing.

Nevertheless, already in March, on the eve of the summit of the heads of the EU, the head of the European Council tried to get in touch with Russia. Charles Michel called Vladimir Putin, noting during the conversation that bilateral relations can only improve if the Russian side demonstrates progress on the implementation of the Minsk agreements, as well as stops the practice of "hybrid and cyber attacks" on the EU countries and respects human rights.

Yes, it was with such a list of far-fetched demands that the head of the European Council tried to improve relations with Russia. Borrel's experience, apparently, taught him nothing.

However, even in such a situation, despite the "unconstructive, sometimes confrontational line" of the European partners, Putin expressed his readiness "to restore a normal depoliticized format of interaction with the European Union, if a real reciprocal interest is shown in this", i.e. left the EU a chance to continue the dialogue.

And it was precisely an attempt to continue this dialogue that was the speech of von der Leyen, who is obviously trying to find an option for building effective bilateral relations, but at the same time forgetting to leave the haughty and demanding tone that has already become habitual. Indeed, on the one hand, the "tolerant and democratic" European Union is accustomed to criticizing Russia, but on the other hand, relations between the EU structures and the Russian government are already too close to the point of no return.

As a result, speaking on May 24 with von der Leyen, Charles Michel noted:

Over the past month, we felt it was important to have a deep debate on Russia. And honestly, today's discussion was helpful in preparing the next step. This step is a global report on various areas of our relations with Russia, which we asked to prepare, - he stressed. - It will allow us to form a strategic vision and, possibly, even strategic actions in relation to Russia.
Thus, on the third attempt, the EU leadership nevertheless began to understand that it was better to conduct negotiations constructively, deciding not to miss the chance left by Putin to normalize relations.

Nevertheless, it is obvious even to a person far from politics that the EU's sudden interest in building constructive relations with Russia cannot but have logical prerequisites. Apparently, senior EU officials gradually began to realize that in the current conditions the European Union cannot afford the absence of a unified position on Russia.

Incompetent management during the unfolding pandemic, the inability to ensure a fair distribution of resources between the EU countries clearly demonstrated not only the political impotence of the EU structures, but also the lack of equality between its members. Countries are still divided into richer and more influential (Germany, France, Austria) and all the rest. The transitional presidency of the Council of the EU does little to change this situation, being rather a formal instrument and does little to help solve the main problem of the EU as a supranational entity - inequality of its member states.

Thus, the inability to adequately respond to external challenges demonstrated the archaic, bureaucratic nature of the EU structures. The European Union, in its current form, looks less and less necessary both politically and economic point of view (Brexit is an example of this). The absence of a clearly structured management system, a unified army and cultural identity makes the EU a colossus with feet of clay, in which, in the event of a crisis, it is every man for himself. This was clearly demonstrated by the situation with vaccines, when the governments of the more developed EU countries, despite assurances from European officials that the drugs would be purchased for all countries, began to conclude separate contracts for the supply of vaccines. As a result, there was a situation of inequality, when in some countries vaccines were purchased in the millions, and in others - the Czech Republic, for example, at some point it was necessary to rely only on handouts from the lord's table in the form of assistance from neighboring Austria, consisting in the supply of only three tens of thousands of doses.

If such cases become known outside the European Union, then there is no doubt that the awareness of the European establishment about the situation on its territory is much higher. EU officials, like any politician, feel great when the chair begins to wobble under them. Especially when it is not the chair of a single bureaucrat, but the EU's “common table”. After all, the voices of Eurosceptics, which sounded loud already in the early tenths, only intensified during the pandemic. The vaunted Schengen agreement was trampled upon in the blink of an eye. EU member states opened and closed their borders as and when they wanted, without any approval from European regulators. Suddenly it turned out that in a crisis situation each country was left to itself, and the EU structures, instead of trying to unite their members, seemed to have stepped aside, creating a power vacuum.

And it is no coincidence that at this very moment the EU decides to begin to improve relations with Russia. History teaches us that in times of internal political crisis, rulers tend to shift the attention of their citizens from internal to external problems. In previous years, European diplomats did not invent anything new and simply copied the actions of the United States, but the situation with Nord Stream 2, when American foreign policy interests came into direct conflict with European ones, obviously forced the EU to reconsider its view of the world. Not all EU politicians are happy with the role of the general censor and curator, which the United States is trying on. It's just that everyone gets it at different times.

The United States, actively seeking to prevent European countries from completing the construction of a gas pipeline on their territory for their own consumers, behaves as in their own right, which cannot but irritate those who have long seen the true essence of overseas partners through and through. Military bases, nuclear warheads, multibillion-dollar fines for European banks and companies (Deutsche Bank and Volkswagen) - all this looks like a relationship not between partners, but between the metropolis and the dominion. So far, there is no critical mass of dissatisfaction with American actions, the United States has taken root too deeply in European politics after the collapse of the USSR. Nevertheless, the irritation imposed from overseas agenda is gradually accumulating and EU functionaries willy-nilly, but they have to pay attention to it.

So it is quite likely that behind the desire to form a single line towards Russia lies a timid attempt by the EU to show uncharacteristic independence in foreign policy and to pave the way for lifting anti-Russian sanctions. It may sound incredible given the current level of relations, but if you dig deeper, it becomes obvious that there are serious prerequisites for this.

The most important of them is that the EU is now in an economic crisis. The pandemic has hit the EU economy hard. A loss of more than 6 percent of GDP in 2020 for a previously steadily growing region could have disastrous consequences for its poorest members (the Baltic countries, for example). Subsidies and subsidies redistributed from developed countries to undeveloped ones are not taken out of thin air. And given the fact that the territory of the EU does not coincide with the Eurozone, this also creates a dangerous precedent for fragmented monetary policy.

In addition, it is gradually becoming clear that the witch hunt cannot go on forever. Sanctions regimes sooner and later, but must be lifted. And when else to do it, if not now? Mutual economic constraints in a pandemic are not beneficial to anyone other than third parties. Overseas third parties, professing the principle of "divide and conquer" for more than a dozen years.

Actually, this principle is used not only within the framework of relations between Russia and the EU, but also within the European Union itself. The core of the anti-Russian bloc in the EU is primarily the Baltic and Eastern European countries that have joined NATO. They are much more committed to the interests of Uncle Sam, and are in the EU structures largely for the sake of the financial component.

The same Poland, for example, is one of the largest recipients of monetary subsidies allocated by the EU, having received in the period since 2004 more than 180 billion euros in various support programs.

Latvia, Lithuania and Estonia, in turn, have long passed the peak of their post-Soviet development - the period of the early-mid XNUMXs, when they were called "Baltic tigers" because of the rapidly growing economy. As it turned out later, the sustainability of this growth was greatly overestimated. Today, these countries are also forced to rely on subsidies from Brussels, which further increases the burden on the already overloaded social sphere with “migrant” contributions.

As a result, the “midlife crisis” that has overtaken the EU poses not only economic or political, but above all existential questions to its leaders. Is the EU needed in its current form? Does he have any future prospects? How does he plan to cope with the consequences of the pandemic, the migration crisis, the failure of the policy of multiculturalism? Is it almost a vassal relationship with the United States forever? And is it worth continuing to spoil relations with its closest neighbor - Russia for the sake of protecting American interests, or is it better to try to restore ties with Moscow?

It is the answers to these questions that will determine not only the future of relations between Russia and the EU, but also the very existence of the European Union. Brussels still has a choice.
Ctrl Enter
Noticed oshЫbku Highlight text and press. Ctrl + Enter
We are
"We must beat first": the geopolitical alignment around Russia is continuously deteriorating
Ten "defeats" of Putin
Reporterin Yandex News
Read Reporterin Google News
31 comment
Information
Dear reader, to leave comments on the publication, you must sign in.