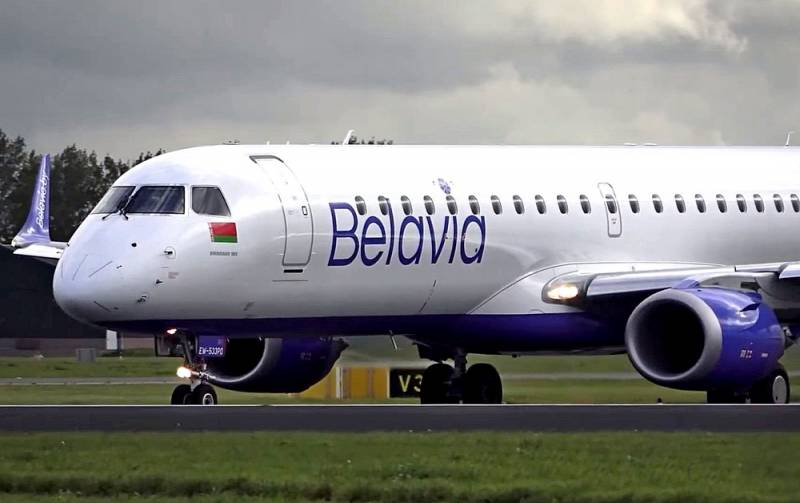 The "boycott" of the Belarusian airspace announced by a number of European airlines, as well as the introduction of a ban on flights to Great Britain and France for local aircraft, were received by representatives of the "world community" in the best Soviet traditions - that is, "with a sense of deep satisfaction." Now, for example, the Western media are savoring the official statement of Belavia about the forthcoming staff cuts due to the drop in traffic. All this is interpreted as "the victory of the civilized world over the bloodthirsty dictatorial regime", a continuous "triumph of democracy" and "the victory of European values."


But is this really the case? Economy, as you know - the lady is very stern and almost more than anything else she does not like interference in her affairs politicians and their attempts to place their own dubious "principles" above her immutable laws. The desire to "punish more painfully" Alexander Lukashenko and the country at the head of which he stands may well turn out to be a "shot in the foot" for those who decided to take extreme measures in this case. They chose a painfully unfortunate time for such demarches. Why is that? But now let's try to figure it out.

This is how, quite recently, the leadership of the organization, which certainly owns all the information on this issue - the International Air Transport Association (IATA), characterized the state of world aviation. Even the most inveterate optimists could not find anything positive in his forecast regarding the future state of affairs in this industry. The global flow of passengers on air liners, they hope, will be able to reach more than 2021 billion people in 2 (this is if a new outbreak of coronavirus does not happen anywhere in the world and the borders are not closed tightly again). However, even this seemingly impressive figure will not even be half of those who traveled under the clouds in the now seemingly unrealistically distant “pre-pandemic” 2019. Consequently, there can be no question of any profits or even a "breakout" for air carriers. According to IATA estimates, they expect losses in the amount of close to $ 50 billion. And this, imagine - an even better option.

For 2020, IATA predicted financial losses for the industry, first at almost $ 85 billion, then at $ 118 and a half. In reality, they amounted to more than $ 126 billion, that is, one and a half times higher than initially predicted. The most severe financial losses in this case, according to IATA, are exactly European airlines - at least 22 billion dollars. According to reports, at least two hundred European airports are currently under threat of closure - they are simply ravaged to the ground ... A significant improvement in the situation (that is, a return to the levels of air travel of those times when the world did not know the word "coronavirus"), according to experts organizations can be expected no earlier than 2024-2025. At best, again, the case ...

I apologize for the very lengthy introduction, but without it, my further conclusions and assumptions might seem exaggerated to someone. Commenting on the above data, the head of IATA Willie Walsh stated that "the negative consequences of the" coronacrisis "for the aviation industry will only grow in the near future." And, consequently, only those representatives will be able to survive who “will be able to maximize and even moreover optimize their own expenses” (that is, to save on everything that is possible and impossible). Well, and also those who "will receive effective support from national governments." The last one is about Belavia. They will probably cut the states a little now. However, Alyaksandr Lukashenka will not let the state airline go broke and perish in any case - no matter what. And as for those who intend from now on to shy away from the Belarusian sky, like, forgive, the devil with incense - there are questions here.

Geography, whatever one may say, is stubborn thing and in no way will it be possible to deceive it. It is enough to look at any, even the most simple map, to make sure that Belarus (well, what are you going to do ?!) is located in the center of Europe and is on the way from it to Asia, the Middle East and so on ... No, the sky, it is, Of course it's big - it's not a problem to fly around. However, all these are extra hours in the air, extra tons of aviation fuel, and therefore extra money. That is, a deliberate increase in the cost of air travel. And by the way, who supplies oil and its refined products to Europe, including fuel for aircraft? Russians and Belarusians ?! Oh-she-she, how bad it turns out! European airlines now and without all this problems - above their heads. And above all - financial. To multiply them with your own hands is really not the most reasonable decision.

Here, by the way, about the problems, and very to the point. Such arose from the airline, which unwittingly found itself at the epicenter of the events on May 23 - the Irish low-cost airline Ryanair. I must say that its representatives behaved in this whole story, to put it mildly, far from the most dignified and decent way. In the first official statement of the company - a press release on the emergency landing in Minsk, information about the incident was presented in a calm and restrained tone. It said that the pilots of the flight, having received a message from the dispatchers, in accordance with safety requirements, landed at the nearest airport, from where, after an inspection carried out by the relevant services, the board departed quite safely. There was no mention of "searches", "arrests" and "fighters" there - just an apology to the passengers for "an unfortunate delay that was not our fault."

Obviously, after such an incredible "blunder" Ryanair's management was thoroughly brainwashed, and even at the highest level. It was after this that a completely different statement appeared on the company's official Twitter page, most of all reminiscent of a hysteria (that is, it is quite consistent with the style of the general reaction of the West to what happened). There was already a "strong condemnation of the illegal actions of the authorities" and even "air piracy." And what is there to believe? Really, I don’t know, but right now, charges have been brought against Ryanair of conducting an “incorrect” and, moreover, “deceitful” advertising campaign, deceiving passengers and the like, called “unfair commercial practices”. The Office for Competition and Market of Italy "soldered" for such tricks to the Irish low-cost airline a considerable fine of 4.2 million euros and ordered "to eliminate the identified shortcomings."

In fact, the scandal erupted due to the fact that Ryanair did not even think to reimburse its passengers for the cost of tickets for flights canceled after July 3, 2020 - despite the fact that restrictions due to the coronavirus pandemic have already been lifted. Despite the earlier promises of a full refund, the airline refused to give the money, trying instead to foist vexed customers with some "vouchers" that they could only fly on its flights. I must say that the Irish are not alone in their data, which strongly smells of fraud, in actions. At least two other European low-cost airlines, the British EasyJet and the Spanish Volotea, also dabbled in exactly the same business. The Italian authorities ordered the first company to pay about 3 million euros in fines, the second - about one and a half. In this regard, the question arises - is it possible to believe the statements of those who change their interpretation of completely obvious events on the principle of "what you please" and even at the same time publicly caught in the real fraud?

However, this is a question from the category of moral and ethical, and we will return to economics. As you can see, European airlines are forced to get out of the current difficult situation by any available means - literally on the verge of legal, and sometimes beyond that. Is it reasonable for them to put themselves in a deliberately unequal position in competition with Russian airlines, which would not even think about flying around Belarus? But surely there will be others ... From now on, those carriers that will follow a direct route, without making unnecessary "loops" in the sky, will be able to offer much better prices to their passengers in a number of directions. First of all, I will repeat myself about domestic airlines.

There is, of course, the danger that some other countries of the European Union will decide to follow the path of Lithuania and prohibit landing on their territory of any aircraft that have passed through the Belarusian sky. Here, of course, the potential consequences can be very serious. However, the likelihood of such a development of events is extremely small, since such decisions would mean the beginning of a real "air war" with mutual discriminatory actions of various parties. At the same time, Russia's position in such a hypothetically possible confrontation is much stronger - after all, if it "closes" its sky for all European flights to Southeast Asia (the same China) - and this will be a transport disaster for the EU. This is exactly what will happen, because Ukraine was forced to abandon flights in these directions - after it severed air traffic with our country. The simplest calculations of "workarounds" showed that it would be cheaper to fly to the moon ...

By the way, the situation with the "nezalezhnoy", which was almost one of the first to sever any air traffic with Belarus, is, as always, a special case. Ukrainian air carriers will be forced to abandon the most popular destination - after all, it was through Minsk that many citizens of this country traveled by air to Russia. Nowadays Ukrainians, accustomed to such voyages, are hastily working on other options. With them, I must say, not a lot. In Europe, the inhabitants of "nezalezhnoy", with its epidemiological catastrophe, do not want to see. Turkey currently has no air connection with our country. Perhaps through Moldova? In any case, the next stupid decision of Kiev to the benefit of the local aviators will definitely not work. As far as is known, Ukraine International Airlines only from April 2020 to March of this year was forced to return $ 33 million to its canceled passengers for tickets for canceled flights. Now there will be even more of them ...

Be that as it may, but as a result of the hasty and "emotional" decisions of some European countries to restrict air traffic with Belarus, Moscow will definitely not be at a loss. And if so, then it will help Minsk to cope with the situation. Well, then we'll see how things turn out.
Ctrl Enter
Noticed oshЫbku Highlight text and press. Ctrl + Enter
We are
US Global Economy: An End That Sneaks Noticeably
“The dark August night came the one whom the Ukrainians were waiting with horror”
Reporterin Yandex News
Read Reporterin Google News
8 comments
Information
Dear reader, to leave comments on the publication, you must sign in.