Russian governor had to make excuses for comparing himself to Putin 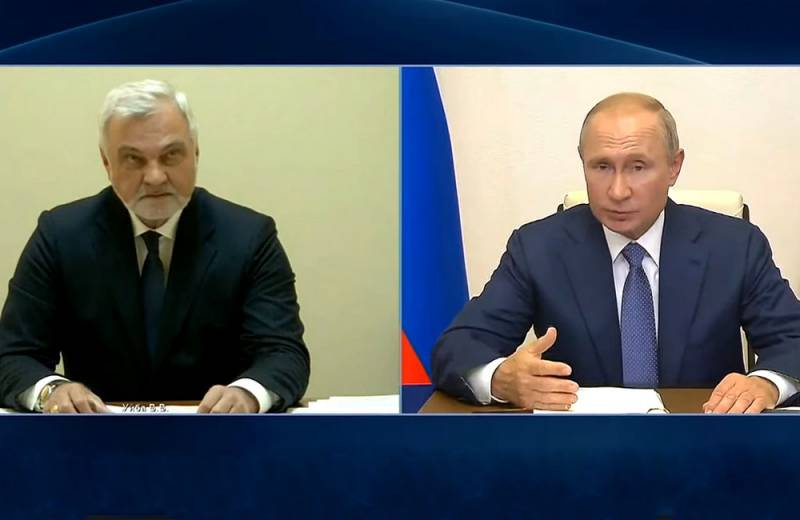 The head of the Komi Republic, Vladimir Uyba, during a meeting with residents of the village of Mutny Materik, compared himself to Russian President Vladimir Putin. After a while, the governor's press service had to make excuses for what the head of the region had said.


On May 11, 2021, the head of the city district of Usinsk (Komi Republic) Nikolai Takaev introduced an emergency regime in the municipality due to depressurization in the Nenets Autonomous District of the pressure pipeline of LLC Lukoil-Komi. The pipeline runs from the main pumping station of the specified field to the booster pumping station No. 5 of the Kharyaga oil field. More than 90 tons of oil products and 9 tons of harmful substances got into the soil and the Kolva River. The village of Mutny Materik found itself in an ecological disaster zone. A criminal case was opened on the fact of violation of environmental protection rules during the work.

On May 17, Uyba flew to the village of Mutny Materik to find out how the process of eliminating the consequences of pollution is going. Residents of the village began to complain about the difficult environmental situation, the lack of high-quality drinking water and transport links, which is why there are difficulties with medical care. Uyba asked him to draw up a list of problems for him, but the residents accepted his proposal without enthusiasm and said that the current situation should be resolved through the President of the Russian Federation, contacting the head of state directly.

Are you our Putin?
- asked one of the residents.

Well, who? I am Putin for you, of course. And who am I to you? I am your head
- answered Uyba.

Wow high. And why did you choose me so that you could write to Putin later?
- Uyba was surprised.


The video recording of this conversation appeared on the Web only on May 24. The regional administration later commented on Uyba's words. According to the governor's press service, Uiba wanted to say that the local authorities should first of all deal with the solution of problems, so there is no need to immediately contact the President of the Russian Federation.

In turn, the press secretary of the President of the Russian Federation Dmitry Peskov made it clear that he sees nothing wrong with the words of the head of the subject of the Russian Federation. In his words, the regions should make decisions on their own, and not constantly point in the direction of the federal government. Local leaders have certain powers and responsibilities.

There are a lot, as far as I understand, the governor has ill-wishers, and they all the time rip something out of context and then begin to virally litter the Internet with this.
- added Peskov.

We remind you that on April 29, in the State Council of the Komi Republic, an incident occurred between the deputy from the Communist Party of the Russian Federation Oleg Mikhailov and the head of the region. After Uibu reported on his work for the year, Mikhailov took the podium and called him a "coward." After that, the microphone was turned off for Mikhailov and he had a conversation with Uibu. Allegedly, the governor invited him to go out and "sort it out like a man."
Ctrl Enter
Noticed oshЫbku Highlight text and press. Ctrl + Enter
We are
In the Donbas, the Ukrainian Armed Forces fired on an important water supply facility.
The most northern highway: the Northern latitudinal railway will be continued
Reporterin Yandex News
Read Reporterin Google News
3 comments
Information
Dear reader, to leave comments on the publication, you must sign in.