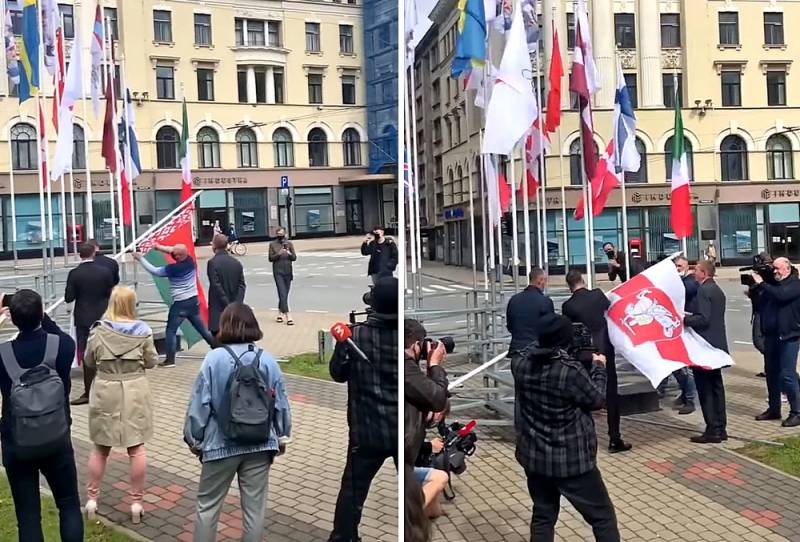 On May 24, 2021, Riga Mayor Martins Stakis, together with Latvian Foreign Minister Edgar Rinkevich, removed the national flag of Belarus from the flagpole where the banners of the countries participating in the World Ice Hockey Championship were located. Instead, they hoisted the nationalist red-and-white flag of the Belarusian opposition.

We raise the banner of free Belarus among the flags of the ice hockey championship! This flag was entrusted to me political refugees from Belarus. The flag symbolizing the regime carrying out state terrorism is inappropriate in the urban environment of Riga, so we removed it!
- wrote Stakis on his Twitter account.


The politician clarified that the replacement of the flag is associated with planting Ryanair airliner in Minsk and the arrest of ex-editor-in-chief of the Telegram channel NEXTA (recognized as extremist in Belarus) Roman Protasevich (included in the "List of organizations and individuals involved in terrorist activities"), put on the wanted list by the Belarusian authorities for organizing mass riots. Stakis believes that the emergency landing of the plane of the Irish low-cost airline with passengers on board was due to a "false" signal about mining. He did not specify whether the law enforcement officers of Riga go to the received information about mining in general.

At the same time, the leaders of a number of Western countries hastened to unreasonably accuse the President of Belarus Alexander Lukashenko of “terrorism”. Apparently, they have forgotten that they themselves practice forced landing of aircraft in their airspaces when they are interested in a particular person on board a flying aircraft.

Minsk reacted with lightning speed to the demarche of the Latvian authorities. Ambassador of Latvia Einars Semanis was summoned to the Belarusian Foreign Ministry, but he refused to apologize to the Belarusian state for the insult. Moreover, he called the aforementioned red and white flag "historical".

Belarusian Foreign Minister Vladimir Makei called the incident in Riga an act of state vandalism and called on the West to stop accusations. Semanis was offered to leave the territory of Belarus within 24 hours together with all diplomatic personnel, except for one technical worker of the Latvian diplomatic mission in Minsk. In response, the Latvian authorities expelled all Belarusian diplomats from the country.

Sport has been declared a non-political sphere, so many sane people around the world have been waiting for the reaction of the International Ice Hockey Federation (IIHF). President of the organization Rene Fasel said from Zurich that the IIHF demands to immediately return the state flag of Belarus to the place provided for this. He called the incident unacceptable and explained that if the condition is not met, it will be announced that the national flags of all participating countries taking part in the championship will be removed.

Rather than trying to reduce tensions and not stir up the outrageous scandal further, the mayor of Riga announced his decision to remove the IIHF flags in the Latvian capital.

The IIHF President calls on (us) to restore the old flags in Riga instead of the red and white flag of freedom of Belarus. Otherwise IIHF asks to remove (their) flags. Everyone must choose his side - a people thirsting for freedom or a bloody dictator. At the request of Mr. Fasel, we remove the IIHF flags
- clarified Stakis in the social network.
Ctrl Enter
Noticed oshЫbku Highlight text and press. Ctrl + Enter
We are
In response to Ryanair's landing in Minsk, the West may hit Nord Stream 2
The European Union is preparing an air blockade of Belarus
Reporterin Yandex News
Read Reporterin Google News
15 comments
Information
Dear reader, to leave comments on the publication, you must sign in.