State piracy or forced measure: how Lukashenka seated an Irish plane in Minsk 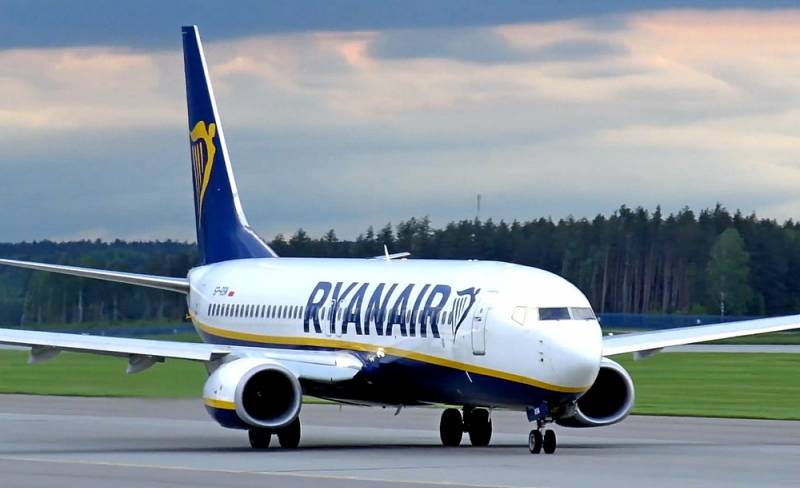 Alexander Grigorievich showed his Ukrainian “colleagues” how to work. Without noise and dust, I sat down the Irish plane on the Athens-Vilnius flight in Minsk, and removed a particularly dangerous terrorist from there. True, for this it was necessary to "mine" the side and raise the air force of the Republic of Belarus into the air. Alexander Grigorievich himself gave the order for "mining" and boarding in Minsk, and Petrov and Boshirov, of course, sat at the controls of the crouched Irish Boeing. The brilliant operation of the Belarusian security forces to detain the founder of the Telegram channel NEXTA Roman Protasevich has already been duly appreciated in the Duma.


But in the "free democratic world", for some reason, this was treated differently. Immediately a whine rose from all the cracks. Give news in one line: 1) The Ukrainian authorities demand the immediate release of Roman Protasevich and consider his detention in Minsk an attack on freedom of speech by the Belarusian authorities. This was stated by the speaker of the Ministry of Foreign Affairs of Ukraine Oleg Nikolenko; 2) Charge d'Affaires of Belarus was summoned to the Ministry of Foreign Affairs of Lithuania, who was demanded to immediately release all passengers and crew members of Ryanair; 3) The President of Lithuania called on the EU and NATO to react to the actions of Minsk; 4) The Austrian Foreign Ministry called for an international investigation into the incident with the Ryanair landing at the Minsk airport; 5) The same is demanded in Germany: The German Foreign Ministry demands from Minsk to immediately clarify the situation around the Ryanair flight and the arrest of the journalist; 6) The Prime Minister of Poland asked the President of the European Council to discuss immediate sanctions against Belarus at a meeting on Monday; 7) The French Foreign Minister called the situation with the Ryanair aircraft in Belarus unacceptable and called on Europe for a tough and unified response; 8) The Greek Foreign Ministry, from where the airliner with the Belarusian oppositionist flew, called the Ryanair plane landing in Minsk an act of “state aviation piracy”; 9) European officials were alarmed as well: the head of the European Commission called the incident with the plane in Minsk unacceptable and stated that all passengers should be able to fly to Vilnius; 10) In turn, the head of the European Council announced the need to conduct an ICAO investigation in connection with the incident with the plane in Belarus; 11) Heavy artillery from foggy Albion also pulled up: the British Foreign Office threatened that the actions of Belarus against Protasevich would have serious consequences; 12) After that, the Prime Minister of Poland woke up again, who now insists on banning flights of Belarusian airlines over the territory of the EU; 15) And naturally, the leader of the Belarusian opposition Svetlana Tikhanovskaya, who called the arrest of Protasevich “an operation of the special services to hijack an aircraft”, demanded that the International Civil Aviation Organization (ICAO) investigate the incident and then take measures up to the expulsion of Belarus from ICAO.

I have the impression that a package of yeast was thrown into the street toilet. How have they not yet written that Lukashenka himself sat at the helm of the raised MiG-29 of the Belarusian Air Force? They demand the release of passengers. Calm down, guys, no one detained them, checked their luggage and let them go. The plane resumed the interrupted flight a few hours later. I suspect they were greeted as heroes in Vilnius. I don't understand at all, what is such a kipish? What else did you expect from the last dictator of Europe? That he will write out coupons for enhanced meals to your oppositionists? In the next five years, three meals a day are guaranteed for your hero (then they will be exchanged for Luis Corvalan).

The opposition's share in the Republic of Belarus is not easy

Honestly, I even feel sorry for this kid. 26 years old (only May 5 celebrated another birthday). Participated in opposition rallies since the early 2010s. I suspect that sincerely, not for money. Then he was expelled from the BNTU lyceum. He entered the journalism faculty of the Belarusian State University, but soon he was expelled from there too (the opposition's lot is not easy!). He worked as a journalist for some Belarusian media. In particular, since September 1, 2018, he worked as a correspondent for Euroradio, where he specialized in photojournalism. He also worked in the Belarusian editorial office of Radio Liberty (that is still a hotbed!). At the end of 2019, he left for Poland, where he asked for political asylum. That's the whole biography.

His father also suffered for his son. Dmitry Protasevich - a former reserve lieutenant colonel (stripped of his military rank on the basis of the decree of the President of Belarus), worked as a senior lecturer in the ideological work department of the Military Academy of the Republic of Belarus. So I suspect, in the Military Academy, especially in the department of ideological work, they do not take just anyone.

Personally, I have zero complaints about this character, Roman Protasevich, against the background of my accomplice Stepan Putilo, who caught a real star and went crazy against the background of the popularity of his Telegram channel, he looks quite worthy, by the way, he was critical of his former colleague from NEXTA. It is a pity that they took the wrong one. Companions in the opposition are now hastily cleaning the social networks of their detained comrade, naively believing that this will save them. Relax, guys, the screens do not burn, the cache even more so. There is already a whole folder on you in the KGB RB. Sit in Poland and don’t rock the boat, especially don’t fly Aeroflot planes!

The Belarusian opposition has already agreed to the point that, with a blue eye, they claim that if the Irish board had not landed, it would have been shot down, for which the fighter was raised into the air. A member of the Presidium of the Coordination Council of the Belarusian Opposition, former Minister of Culture Pavel Latushko told about this on his Telegram channel. It is understandable, dad has nothing to lose. After all, he will knock down a Boeing with 123 passengers on board like two fingers on the asphalt, after which, I think, he will start knocking down trams. I would not ride trams in Latushko's place, just in case, (although I'm not sure that there are trams running where he is hiding, there are Rolls-Royce Motor Cars brands moving exclusively on scooters). 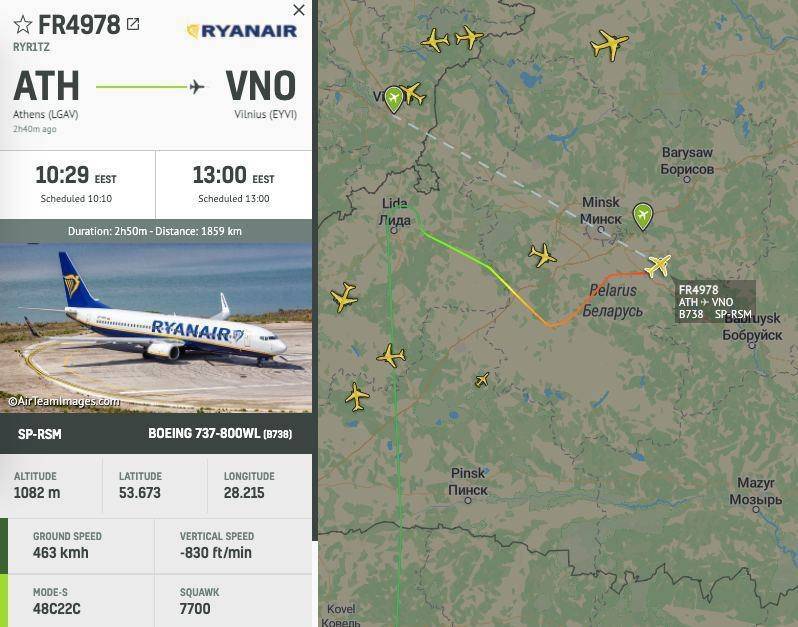 Protasevich noticed the "tail" behind him back in Athens (the employees of the Belarusian special services are not working well!). Telegram-channel "Belarus of the Brain" writes about this, where the detainee worked as editor-in-chief. According to Protasevich, before the flight, a middle-aged man who spoke Russian began to show "unhealthy attention" to him. Protasevich told his colleagues that at first the unknown tried to film his documents, and then left, although he was next in line to check the documents.

Awareness of everything that was happening came to Roman already in the air, when he noticed a MiG-29 of the Belarusian Air Force flying in a parallel course through the window (Our hero has good eyesight, don't you think? How was he able to see the country of his belonging there? Although I am delirious - there are others in the sky over Minsk MiGs do not fly!). According to the passengers flying with him, he grabbed his head and panicked, but it was too late. Before he was taken out of the plane, he managed to tell his fellow travelers that the death penalty awaits him here.

In fact, on November 5, 2020, Protasevich and Putilo were charged in absentia under three articles of the Criminal Code of the Republic of Belarus: organizing mass riots (Article 293), organizing actions that grossly violate public order (Article 342), and inciting social enmity on a professional basis ( Article 130, part 3). On November 19, 2020, the KGB RB added Protasevich and Putilo to the list of terrorists. The press pointed out that Protasevich could face the death penalty if detained, although other sources noted that, on the charges brought against him, he could avoid being shot. Disagreements regarding the possibility of applying the capital punishment to Protasevich are caused by the presence of his name in the list of persons involved in terrorist activities compiled by the KGB, but without being charged under the relevant article of the Criminal Code of the Republic of Belarus (Article 289 "Act of terrorism").

I want to be clear. He does not face the death penalty. Indeed, in November, the State Security Committee of Belarus included Protasevich, as well as Stepan Putilo, another founder of the NEXTA Telegram channel, on the list of persons involved in terrorist activities. Prior to that, the Investigative Committee of Belarus opened criminal cases against them. Putilo and Protasevich are accused of organizing mass riots, as well as actions aimed at "inciting social enmity" against representatives of the authorities and security forces of the country. The sanctions of the articles, according to which he is accused, imply punishment up to imprisonment for up to 15 years. My opinion: he will be sentenced to 5 years, and then dad will have mercy on him and release him. It will be beautiful!

Place your bets. RF and RB entered a turbulence band. But all the changes are only for the better. We will talk about this in the next article (there we had a breakthrough with SP-2, the last restrictions were removed, then only “clean water” is a victory!).
Ctrl Enter
Noticed oshЫbku Highlight text and press. Ctrl + Enter
We are
What is behind the explosions at arms depots in the Czech Republic
"We must beat first": the geopolitical alignment around Russia is continuously deteriorating
Reporterin Yandex News
Read Reporterin Google News
35 comments
Information
Dear reader, to leave comments on the publication, you must sign in.