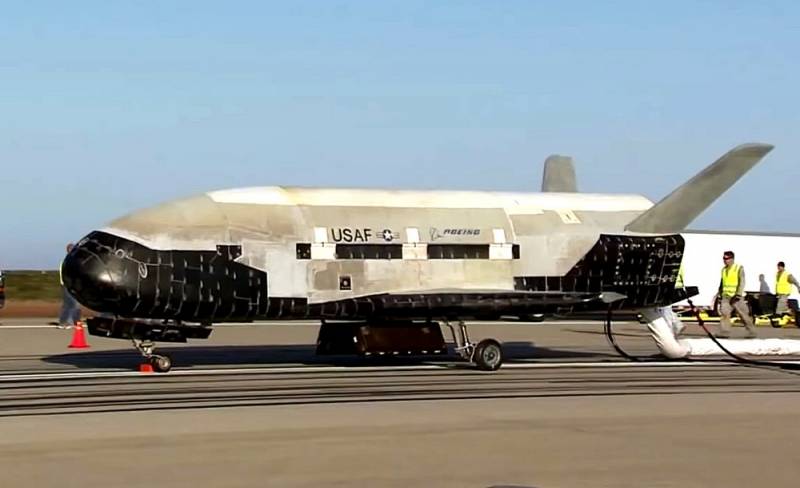 Now it's finally time to take off the masks. It turns out that the Boeing X-37 unmanned reusable experimental space plane was created for military purposes and can be used by the United States for orbital nuclear bombing of the enemy. This was bluntly stated by the head of the Almaz-Antey defense concern, confirming that the American shuttle poses a real threat to Russia. How can we answer this challenge?


General Director of the Almaz-Antey VKO concern Yan Novikov said that the Pentagon intends to bring the total number of its space drones to eight, and each of them can be used as a carrier of nuclear weapons:

It is officially stated that these devices are created for scientific purposes, and of intelligence. But we understand that with such capacities free and opportunities, according to our estimates, a small device can carry up to three nuclear warheads, a large one - up to six.
Previously, numerous military experts and analysts wrote about such scenarios, but now this has been officially confirmed by a representative of our defense concern. How did it happen that the RF Ministry of Defense slept through such a threat, and if not, then how does it intend to cover the country from a new space threat?

First of all, let's understand what the X-37B Orbital Test Vehicle (OTV) is. It is a reusable unmanned shuttle capable of autonomously staying in space for a long time at altitudes from 200 to 750 kilometers, actively moving, changing orbits, and maneuvering. The United States did not particularly spread about the purpose of creating such an apparatus, explaining that its function could be the delivery of some small cargoes into orbit. It was also suggested that the X-37B could be used for reconnaissance and as an interceptor that destroys enemy space infrastructure. Allegedly, American shuttles should monitor Chinese and Russian military satellites and orbital stations and, if necessary, quickly neutralize them.

However, all this seems to be "childish pranks" in comparison with their real purpose, which was announced by the head of the concern "Almaz-Antey" Novikov. Eight orbital shuttles carrying on board from 3 to 6 nuclear warheads capable of being in space for a long time in an autonomous mode. At the start of this program, the Pentagon assumed that the X-37B would be able to stay there for over 270 days, but this record was repeatedly broken: during the fourth flight, the experimental drone was in orbit for 718 days, the next - for 780 days. This means that we have overhead, each X-37B will be able to carry out combat duty for two years, upon receipt of an order, dropping from a height of 300-320 kilometers from 3 to 6 nuclear warheads. And what do you want to do with it? This is not the start of intercontinental ballistic missiles, the launch of which we are able to track and have spent Technology intercepting them. And what does Russia have against a potential orbital nuclear bombardment?

In fact, everything is pretty sad. We have the largest country in terms of territory, and only Moscow is really covered with an anti-missile umbrella. It was created in the seventies of the last century, when the USSR and the USA agreed on the mutual limitation of missile defense systems in one positional area with a radius of 150 kilometers. The Americans decided to cover the launching positions of their ICBMs in North Dakota, and we - Moscow. Our anti-missile shield was named A-135 "Amur". Its exact tactical and technical characteristics are secret, but it is known that the Don-2N radar station was at one time the only terrestrial radar station that managed to find a tennis ball in space, which was fired from the Discovery shuttle for an experiment, and plot its trajectory. The nuclear "arrows of the Amur" reliably cover Moscow with an anti-missile shield. But what about the rest of Russia? St. Petersburg, Kazan, Novosibirsk, Yekaterinburg, Sochi, Chelyabinsk, Vladivostok and other cities of our country? By the way, in 2002 the United States finally withdrew unilaterally from the ABM Treaty. With the emergence of American X-37Bs with several nuclear warheads on board in orbit on constant combat duty, the balance of power may change quite indecently. So what can we really counter this?

The first thing that comes to mind is the layered territorial missile defense system A-235 (Nudol), developed by the Almaz-Antey concern. Modern threats demanded a deep modernization of this system. Its performance characteristics are secret, but from open sources it is known that in the updated form, Nudol should become mobile, not tied to any stationary object, be able to intercept at an altitude of 500 to 750 kilometers, that is, in low earth orbit, in including non-nuclear anti-missiles. "Nudol" makes it possible to destroy the space shuttle, but what if a potential adversary launches a preemptive nuclear strike "without a declaration" by dropping warheads previously equipped with a maneuvering unit? Intercepting them will turn into an extremely difficult task for which the entire anti-missile defense system will have to be rebuilt.

The promising S-500 anti-aircraft missile system will be able to contribute to this. "Prometheus" should become the first air defense system in the world capable of working in near space. Its 40N6 ultra-long-range guided missile will be able to reach speeds of up to Mach 9 and intercept targets flying at Mach 15,6 at an altitude of 200-250 kilometers. The new architecture of the missile defense system should optimize the work of Prometheus: for different types of targets - airplanes and helicopters, cruise missiles, ballistic missiles, satellites - there will be a separate radar station, and anti-aircraft systems will be armed with specialized types of antimissiles for their maximum effectiveness. Obviously, the S-500 will have to be adjusted to intercept possible attacks from orbit.

Thus, we have technical groundwork for stopping a new threat from space, but in order to really cover the whole country with them, or at least key cities with a population of over one million and strategically important infrastructure, it is necessary to invest colossal financial resources, and the Ministry of Defense of the Russian Federation will have to constantly monitor the situation. in orbit to exclude a preemptive nuclear strike. In fact, this means a new round of the arms race, ruinous for Russia. It is necessary to calculate whether it would not be more expedient to create a symmetrical threat for the United States by launching its own "mini-Burans" into orbit. Which solution would be more rational: to try to create an impenetrable anti-missile shield over a huge country, or to invest in the restoration of the production of miniature unmanned space shuttles for dual use?
Ctrl Enter
Noticed oshЫbku Highlight text and press. Ctrl + Enter
Reporterin Yandex News
Reporterin Yandex Zen
13 comments
Information
Dear reader, to leave comments on the publication, you must sign in.