“Admiral Nakhimov” showed that the Russian fleet does not need “Peter the Great”? 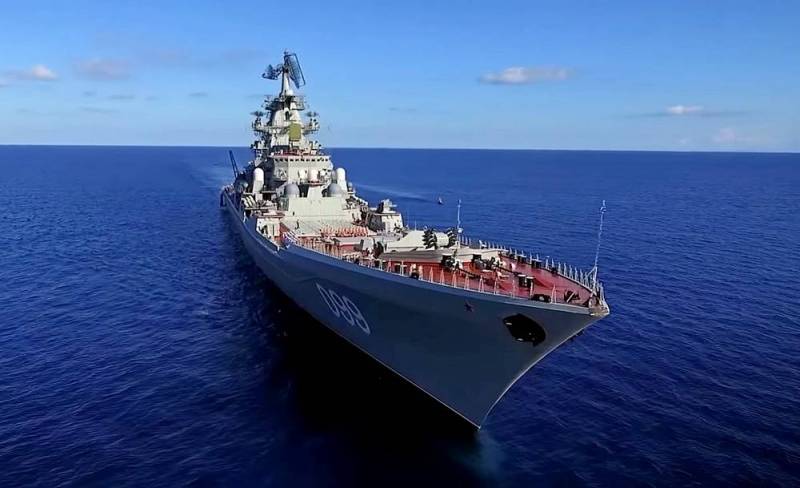 In 2022, the modernization of the heavy nuclear cruiser "Admiral Nakhimov" should be completed, and its place on the stocks will be taken by its colleague on the project "Peter the Great". Taking into account the extremely high cost of the modernization of the Nakhimov for the budget, proposals are already being made not to make it as large-scale on the Petra, but to use the saved funds to build other ships. What is more important for the country: a super-powerful, but only "Orlan", or 3-4 newest frigates equipped with guided missile weapons?


The question is very controversial, so we will try to take into account all the pros and cons. First, you need to figure out why the Orlan project was created at all. And it arose as a Soviet response to the US Navy's naval operation called Sea Orbit. In 1964, the nuclear-powered aircraft carrier Enterprise, accompanied by the nuclear-powered missile cruiser Long Beach and the nuclear-powered destroyer Bainbridge, demonstratively circumnavigated the world, conducting military exercises with their allies along the way. Thanks to nuclear power plants, American ships had an unlimited cruising range, high autonomy, and could operate freely on long-distance sea communications. All this made a strong impression on Moscow, and as a symmetrical response, the USSR began developing its own heavy nuclear aircraft-carrying cruiser of Project 1160 "Eagle", which required a large, powerful nuclear ship to escort and protect.

As a result, the Orlan project appeared, combining simultaneously shock, anti-aircraft and anti-submarine functions, capable of operating in the far sea zone, but we did not work out with a nuclear aircraft carrier. As a result, the USSR received four super-powerful TARKs, which were inherited by the Russian Federation. Two of the heavy cruisers have been decommissioned and are subject to scrapping, the Admiral Nakhimov is undergoing modernization, and the Peter the Great is awaiting its turn. And here the key question arises, how deep it should be.

On the one hand, the Russian navy is experiencing an acute shortage of surface ships, especially large ones, and two Orlans — here they are. Each of them can carry on board a gigantic amount of weapons and carry out a full range of combat missions. After modernization, the TARK is capable of delivering massive missile strikes with Caliber, Onyx and promising Zircon, repelling air raids and sinking enemy submarines. As the flagship of the fleet, the Admiral Nakhimov and Peter the Great dramatically increase its combat capabilities and stability. Given the shortage of large surface ships, this is worth a lot. And also their formidable appearance makes themselves respect.

On the other hand, the Japanese Yamato and the German Bismarck once made a great impression on the enemy. Each of our "Orlan" individually is able to withstand for some time a massive attack of the enemy's AUG and drown a lot of enemy ships, but its ending will be predictable. Alone, such a heavy cruiser will not go on long-distance raids, we do not have a nuclear aircraft carrier in pair for it, and is not expected, and frigates have relatively little autonomy. It turns out that both TARKs are objectively assigned the role of flagships, but the flagships are very expensive. During the modernization "Admiral Nakhimov" was almost completely redesigned, and its cost is estimated at hundreds of billions of rubles. Critics of the project quite rightly point out that these funds can be used to build a second series of Borey-A strategic nuclear submarines, 3-4 Project 22350M missile frigates, a brigade of corvettes, or upgrade our entire naval aviation in one fell swoop. Objectively, they would be more useful.

What options then remain?

At first, you can still "pump" to the maximum and "Peter the Great", without stinging money, and then send it, for example, to strengthen our relatively weak Pacific Fleet, leaving "Admiral Nakhimov" as the flagship of the Northern Fleet.

Secondly, you can completely abandon the modernization of "Peter the Great", sending it to the metal, as his brother in the project "Admiral Lazarev". The saved funds can be used to build 3-4 frigates of the modernized project 22350M. These are quite promising ships, designed to become the backbone of our fleet of the far sea zone. Such frigates should receive 24 universal launchers, that is, 48 ​​"Caliber", "Onyx" or "Zircon", as well as 96 cells for missiles. Thanks to their increased displacement, they come close to the American Arleigh Burke-class destroyer, the main workhorse of the US Navy. Yes, each Project 22350M frigate will be weaker than the Orlan, but instead of one ship, there can be four of them. If we talk about the combat survivability of the group, then 4 is always preferable to 1.

Thirdly, you can go the way of a compromise and not send a Soviet veteran to undeserved disposal. Instead, it can be directed towards modernization, but not complete, but partial. Its result should be an extension of the service life of an age cruiser, as well as an increase in its strike capabilities. It can be turned into a powerful floating missile battery, at the same time equipped with a modern anti-submarine complex "Packet-NK". The cost of modernization will significantly decrease, freeing up funds for other shipbuilding projects, for example, all the same frigates of project 22350M.
Ctrl Enter
Noticed oshЫbku Highlight text and press. Ctrl + Enter
We are
Why Russia was forced to make a choice in favor of Project 11356 URO frigates
New weapons on the way: What is known about the anti-satellite complex "Burevestnik"
Reporterin Yandex News
Read Reporterin Google News
21 comment
Information
Dear reader, to leave comments on the publication, you must sign in.