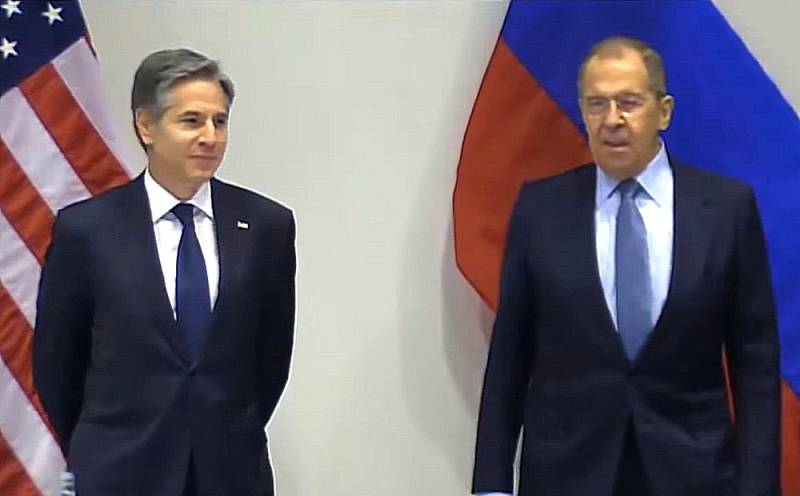 On May 19, in Reykjavik, "on the sidelines" of the Arctic Forum, a meeting was held between the heads of the foreign affairs agencies of the United States and Russia, which all the world media has already rushed to position as "a decisive step towards the summit of Vladimir Putin and Joe Biden."


It must be said that for the general public, both US Secretary of State Anthony Blinken and Russian Foreign Minister Sergei Lavrov said a lot of the usual words in such cases - about "constructive dialogue" and other things like that. However, a detailed analysis of both their meeting itself and many things that accompanied and preceded it, suggests somewhat different thoughts.

Russia needs respect, and the US needs predictability

As a matter of fact, the fundamental differences in the positions of the two countries become visible to the naked eye, one has only to get acquainted with the statements of their representatives made before the start of the talks. Mr. Lavrov, despite the "significant discrepancies" both "in the assessment of the international situation as a whole" and in "the methods and methods that should be used to normalize it," expressed Moscow's readiness to "discuss any issues", but only in that if it is conducted honestly and on the basis of mutual respect. Mr. Blinken's "opening remarks" sounded in a completely different tone. He also spoke about "serious disagreements in US-Russian relations."

However, from talking about the need to "solve them for the good of the whole world," he suddenly "jumped" to completely open threats: they say, if Russia "behaves aggressively, then we will respond"! We are already answering - and how! Not for the sake of conflict, but solely for the purpose of "protecting interests." A good start for a "constructive dialogue", there is nothing to say ... The head of the State Department once again stressed that Washington is looking in relations with Moscow not in any way for mutual understanding, mutual respect and the like, apparently absolutely alien to him matters, but only for "predictability and stability ". The trouble is that in translation from the American "predictability" of partners means their full readiness to fulfill, without reasoning or trying to argue, all the requirements and whims of the United States, and "stability" should be understood exclusively in the sense that this should always be all absolutely cases. That's the whole story. These are not speculative arguments at all, since they are fully and completely confirmed by the entire course of the "dialogue" going on between our country and the United States.

Take, for example, an event that became a formal reason for the two states' chief diplomats to "cross paths." A couple of days before the meeting of the Arctic Council, the US State Department did not fail to make a statement about "concerns about Russia's increasing its military presence" in the Arctic. Naturally, Sergei Lavrov could not help reacting to this demarche and once again tried to explain to the “concerned” that the actions of our country in the region, which is an unconditional sphere of its exclusive vital interests, are its own business, they are “legitimate and legal”, and, consequently, no assessments are required. Including - and their military-strategic aspects. In response, Anthony Blinken erupted into a lengthy speech on the "inadmissibility of the militarization of the Arctic space", which, according to Washington, is "a region of international cooperation." That is, a place where the rules and laws will be established not by Moscow, but by the "world community" under the leadership of the United States, which is currently building icebreakers for its own Navy at an accelerated pace. As a weighty proof of their own peacefulness, it is obvious ...

In short, on this issue, the parties, as they say, have not reached a consensus. A similar situation is observed not only in the Far North, but also in the hot South. Just a couple of weeks before the meeting of the heads of diplomatic departments, Pentagon Inspector General Sean O'Donnell, reporting on the progress of Operation Unwavering Determination in Syria, bluntly stated that the Russians "seriously interfere" with the actions of the coalition conducting it. Mainly by the fact that they do not allow the "Syrian democratic forces", which aims to overthrow Bashar al-Assad, to develop properly. The Russian Embassy in the United States immediately responded to this demarche, reminding the Americans that, in fact, they are completely illegal on Syrian soil. And therefore, it is not for them to "criticize the actions of the Russian forces that are there legally." Somehow it doesn't look like mutual understanding ...

Meeting of two presidents for the sake of one gas pipeline?

Both Anthony Blinken and Sergei Lavrov, before the start of the talks, voiced those aspects of global problems on which their countries have, if not the same views, but at least common interests (the head of the Russian Foreign Ministry especially emphasized this). These included the fight against climate change, countering the coronavirus pandemic, the situation in Afghanistan, the nuclear programs of the DPRK and Iran. Yes, Moscow and Washington can, perhaps, find “points of contact” based on them. However, this very “divergence of views”, which Lavrov emphasized, may well turn into an insurmountable obstacle to cooperation. Green course?

It is quite obvious that the American side would not mind the West following them, but completely different countries, whose exports will be subject to a "hydrocarbon" tax, pay for it. First of all, ours. For domestic exporters, "draconian duties" on their products will bring huge losses, which will be beneficial to competitors from the United States. With Afghanistan, the situation at the moment roughly fits into the formula: "We broke firewood - and you rake it!" And if Washington here yearns for "cooperation" in the form of deploying its own military bases and contingents in Central Asia, near our borders, it is unlikely to find Moscow's understanding and support. The nuclear programs of those countries that the Americans have recorded as "outcasts" and, sparing their efforts, are being treated with sanctions? Without a doubt, they want to try Russia as a lever of pressure, a kind of "acceptable negotiator" with whose participation it is possible to intensify the process of forcing Pyongyang and Tehran to completely and unconditionally renounce their nuclear status. And what do we get from this ?!

So far, the only more or less clear "step towards" Moscow, with half a sin, can be considered the US refusal to immediately impose sanctions against companies involved in the construction of Nord Stream 2, announced just before the meeting between Blinken and Lavrov. The direction in which the United States is demonstrating its readiness to make concessions, albeit symbolic, is the refusal of an irreconcilable struggle against the export of Russian energy resources to Europe. However, in this moment you should not delude yourself at all. The sanctions were put on pause not for the sake of Moscow, but solely in order not to finally fall out with Berlin.

Apparently, the Biden administration decided not to follow a straightforward policy predecessor, and to act more cunningly - to "bury" the "Nord Stream-2" by the hands of the Germans themselves. We are talking about the "green" politicians who, as expected, may well prevail in the elections to the Bundestag, coming this fall, but for now, thunder and lightning are thrown from the parliamentary and other tribunes in advance against the gas pipeline they hate. Here Washington clearly intends to play "long", but in any case - pursuing exclusively its own interests. So is it worth fussing with the presidential summit, at which, which is very likely, Moscow will demand many concessions from Moscow in exchange for a temporary cessation of direct attacks on a single gas pipeline, including on fundamental issues? The press release issued by the US Department of State following the meeting in Reykjavik suggests just such assumptions. Despite all the talk about "clearing the rubble" in relations between the two countries and the statements of the same Blinken about "the absence of irreversible contradictions", it sets out the same standard set of absurd claims against Russia.

According to the American Foreign Ministry, its head in the Icelandic capital did not conduct diplomatic and balanced conversations with Sergei Lavrov, but chastised him for "persecuting opposition organizations" in our country, insufficient attention to Navalny's precious health, "repression" against foreign agents who were included in the list Western media and the like, which are purely internal affairs of Russia. And, of course, he expressed the traditional "deep concern" about the "deployment of Russian troops", and not only in the immediate vicinity of Ukraine's borders, but also "on its territory." He also demanded that Moscow "immediately and unconditionally" release two US citizens who are in prison in Russia - Trevor Reed and Paul Whelan. The first is serving time for assaulting police officers, the second for espionage. Both are innocent, of course. Because the Americans ... As you can see, the official rhetoric of Washington does not change one iota - and, therefore, one should not expect from it any truly fundamental steps aimed at reducing tensions, such as refusing to push Kiev towards anti-Russian demarches. All the same "blind spot".

Tellingly, the press secretary of Vladimir Putin, Dmitry Peskov, answering regular questions from journalists about the prospects for a meeting between the leaders of the United States and our country, said that a decision on such a meeting would be made "following the negotiations between Sergei Lavrov and Anthony Blinken." According to him, the head of the domestic foreign policy department has already reported all its details to the president in the most thorough way. There is no solution yet ... A little earlier, the same Dmitry Peskov noted that possible topics for a personal conversation between Vladimir Putin and Joe Biden could be exclusively “issues of global strategic stability”, and not cheap bargaining, and even with the use of techniques of dubious honesty. And, even more so, not a showdown over the frankly boorish statements of the American leader. Vladimir Vladimirovich, due to the adaptability characteristic of the Russian soul, will not remember any intemperance in his language. But most likely, he will not talk about anything.
Ctrl Enter
Noticed oshЫbku Highlight text and press. Ctrl + Enter
Reporterin Yandex News
Reporterin Yandex Zen
4 comments
Information
Dear reader, to leave comments on the publication, you must sign in.