President of "anti-Russia": what 2 years of Zelensky's rule showed 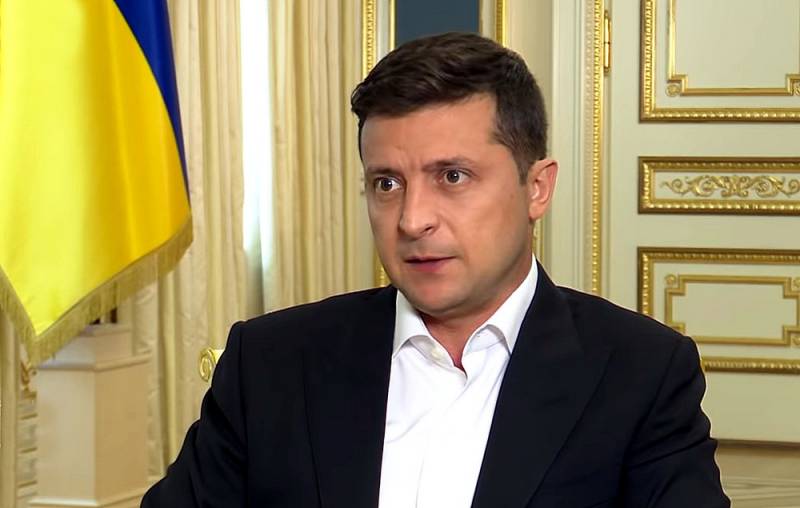 May 20 is the second anniversary of the inauguration of the current head of Ukraine into the highest public office. One way or another, but this is a country that not only has a common border with Russia, but also has a rather serious impact on its life, especially since 2014. Let this mostly happen indirectly due to the fact that since that time Kiev has turned into an instrument in the hands of much more powerful geopolitical "players", but the fact remains - at the heart of many sanctions restrictions, reproaches and claims made against our country , lies precisely the "Ukrainian question". This is a fact, and it was recently recognized by none other than Vladimir Putin.


"To brush aside" the fraternal republic that was once for us, to abstract from it according to the principle: "let them there themselves ..." does not work and will not work with all the desire. And if so, it makes sense to sum up some of the results of the two-year presidency of the current leader of this state and try to draw certain conclusions and forecasts on their basis.

From the moment of its acquisition of “nezalezhnost” the most different characters stood at the helm of the state of Ukraine. Leonid Kravchuk, who repainted from a communist to a "Bandera" (or was he repainted from a Bandera to a "communist"? You can't figure it out) ... "Strong business executive" Leonid Kuchma, who somehow raised the country thanks to economic support and help from Moscow, and then began to twist savory blows in her pocket ... Viktor Yushchenko, "not poisoned" by enemies, who had been in a parallel reality for four years, or under the heel of the US State Department and his own wife, who personally represented him in Kiev ... "Viktor Yanukovych, who turned out to be a coward who outwitted himself and shamefully profiled the country ..." Syvocholy Hetman "Petro Poroshenko, during his abstinence presidency so sick of the people that he, as in a fairy tale, voted" for the first comer "...

Well, and now, in fact, Vladimir Zelensky is this very first comer - a figure, it would seem, a priori impossible in the presidential chair. I'll make a reservation right away: in his true incarnation of the comedian, I never liked Zelensky either. This, however, is a matter of personal taste, which I do not impose on anyone. But the head of state ?! Completely without the appropriate education, without the slightest experience of work in the slightest degree of significant leadership positions in government bodies, without any political "Stories" ... Ukrainians (and let's be frank - they are not the only ones) believed three things. The first is that "anyone will be better than Poroshenko." The second is a thoroughly fake film "Servant of the People", where Zelensky played the president "breaking templates" who did not spare himself "for the sake of the people." The third "trick" was the comedian's election promises. Here it is worth dealing with them in more detail.

The truth that the most shameless lies sounds after the hunt, before the war and during the elections, has not been canceled. However, at least something could be done ?! As practice has shown, it is impossible ... First of all, the main landmarks, which Zelensky called both during the pre-election race and after its victorious end, remained “overboard”. “End the war in Donbass” was almost the first among them. At the same time, the newly elected head of state clearly and unambiguously indicated the way to this: "follow the Minsk direction to the end." That is, to fulfill all the agreements and obligations that Kiev has undertaken both in this and in the "Normandy" formats. In the end, everything came to such an aggravation of the situation in the East of Ukraine that Moscow had to arrange the largest “show of force” in recent years in order to prevent a big war and a big disaster. As for the "Minsk Agreements", it was under Zelenskiy from Kiev that calls for either their "correction" or complete denunciation are heard more and more often.

Unfortunately, these words are fully supported by deeds - in the latest versions of its own proposals for resolving the situation in Donbass, submitted for consideration by the Normandy Four, Ukraine again put forward a number of impossible claims that completely negate Minsk as such. And, by the way, Zelensky lied about everything else - for example, those things that were supposed to mark his following the path of the cinematic Goloborodko. He did not transfer his administration from the center of Kiev, its staff, having first reduced it for the sake of appearance, again inflated to the limit, and did not refuse from magnificent corteges and protection. Moreover, in many such matters (in the same number of bodyguards), he also surpassed his predecessors. No "servant of the people" came out of him, which, however, was quite predictable.

Such an extremely impartial definition of Ukraine was given by the Russian president quite recently, during a May 14 meeting with the permanent members of the national Security Council. At the same time, Vladimir Putin did not fail to mention that this was “very sad,” but immediately added words to what he said that made many politicians in Kiev noticeably tense up. It would be - the definition of "the territory from which Moscow will constantly be presented with problems in the field of security" clearly does not bode well for the country to which it sounded. And, by the way, in Ukraine they very much even noticed that the change in the rhetoric of the Russian leader took place right now, and not, say, in not such and distant times of Poroshenko, who seemed to be completely impossible to overshadow in the field of Russophobic demarches.

Nevertheless, Zelenskiy, who criticized his rival in the elections, including for his “inability to negotiate with Moscow,” did it quite well. And the problem here is not only that the words "aggressor country" very quickly entered its lexicon and have long been pronounced without hesitation for any reason and without it. Zelensky, apparently completely devoid of anything even remotely reminiscent of what is commonly called the "inner core", turned out to be a much more zealous executor of the will of Western "partners" than the same Pyotr Alekseevich, who at certain moments was restrained from abrupt steps by elementary the instinct of self-preservation and some kind of experience of a politician. The comedian president, one gets the impression, with extraordinary ease "bends" under any pressure, following the lead of those who absolutely do not give a damn about both his own future and the future of the country, which turned out to be, unfortunately, in the hands of this clown. And Zelensky is simply unable to calculate the consequences with his own mind.

He, like a boy, is “built”, “educated” and trained in the US Embassy, ​​in the British MI-6, in the Elysee Palace ... But what to say about Western leaders and hardened special services aces, if this would-be president was unable to shorten his own, homegrown radicals! Whatever one may say, but the word "sucker" scribbled by them at the entrance to Zelensky's residence, apparently, turned out to be very appropriate there. Why is Putin talking about "anti-Russia" right now? Because even during the period when the direct organizers and participants of the bloody coup d'etat of 2014 were in power in Kiev, they, willy-nilly, observed at least some framework. They could splutter as much as they wanted from the stands, shrieking about "aggression", but they did not close objectionable TV channels, did not disperse "opposition" parties and did not try to put their leaders behind bars, knowing full well that the Kremlin would not like it very much.

For Zelensky, and this is already absolutely obvious, there are no “red lines”. Either in London, or in the American embassy, ​​he was given the command to "clean up" the pro-Russian politicians and media, and he is happy to try. The fact that his ridiculous gestures from the very beginning led, for example, to a fuel crisis in the country (and this - during the sowing campaign!), And ended with a formidable "message" from Putin, the dimwitted "leader of the nation" either does not notice whether he does not want to notice. It is impossible to get rid of the feeling that he continues to play even now, he lives in the illusory world of the film set, where at any moment you can shout: “Camera, stop!”, And unsuccessful takes are simply reshomed. Who would have explained to him that real life, and, moreover, big politics, have completely different laws of the genre and the payment for director's "bloopers" in it - not spoiled film, but ruined lives.

"But after all, Zelensky did not start active hostilities in Donbass, which were fought there during the Poroshenko era?" Someone might ask. Yes, I didn't. Bye ... And bye is the key word here. And besides, one should in no way thank the Ukrainian president for this, but Vladimir Vladimirovich and Sergei Kuzhugetovich, who very timely and intelligibly "put their minds" to both himself and the western "curators" of Kiev. The attack on the Republic of Donbass was not launched solely thanks to them, and also due to the fact that Zelensky did not receive a direct and unambiguous order against him. So far ... Nevertheless, Kiev's actions within the framework of the "negotiation process for a peaceful settlement" turned into an outright clownery clearly indicate that the Ukrainian side does not see any other way, except for the forceful "de-occupation" of the region, in principle.

One friend of mine, when asked a puzzled question as to why he voted for such an odious candidate, replied something like: “Under Zelensky, it will be cool anyway ...” Surely, many thought so. But the presidency of the clown did not bring anything funny to Ukraine. According to its State Statistics Service, in March this year, the number of deaths of citizens exceeded the same indicator last year by 34.4%. The team of "servants of the people" led by Zelensky has failed miserably in the fight against the coronavirus pandemic, simply pilfering and blowing the money allocated to it from the budget.

Theft from the treasury, corruption, raiding, the objects of which are, among other things, key state enterprises that have survived, have reached proportions unseen under any previous president. As well as the impoverishment of the population, which is no longer able to pay the colossal extortions demanded by the state. At the level of the highest representatives of the government, there is a lot of talk about the abolition of pensions, as such ... In addition, Zelensky and his "team" still continue to drag Ukraine to the abyss of war, which will inevitably be suicidal for it. The comedy did not work out - one continuous tragedy, to which there is no end in sight.
Ctrl Enter
Noticed oshЫbku Highlight text and press. Ctrl + Enter
We are
Who actually won the Cold War and what the future holds for the world
Ten "defeats" of Putin
Reporterin Yandex News
Read Reporterin Google News
8 comments
Information
Dear reader, to leave comments on the publication, you must sign in.