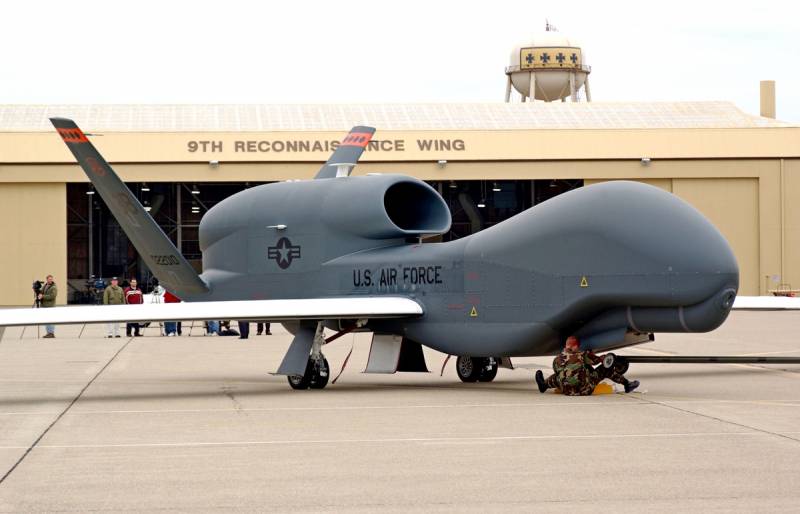 Over the past few years, American manned and unmanned reconnaissance aircraft have become a constant and unwelcome guest in the Black Sea and over the Nezalezhnaya steppes. The US Air Force Northrop Grumman RQ-4B-40 GlobalHawk UAVs take off from the Sigonella airbase in Italy, fly over the Russian southern border, then along the Crimea head to the contact line in Donbas, and then return back with intelligence. In fact, this has already become a permanent US Air Force watch over the Black Sea water area and Ukraine. Recently, however, various troubles have begun to occur with American UAVs.


So, at the end of April 2021, during a recent large-scale military exercise, which was organized by the Russian Ministry of Defense near the Ukrainian border, several RQ-4 Global Hawks circled over the South-East of this country at once, carefully observing everything that was happening. Suddenly, one of the scouts gave a signal 7600 (loss of communication) and was forced to make a U-turn, rapidly retiring in the opposite direction. On May 18, something similar happened again. Another American drone with tail number 11-2049 and callsign FORTE10 initially followed the usual route, but in the area of ​​the city of Izyum in the Kharkiv region, it abruptly changed its route to Pavlograd - Dnepr - Nikolaev, also making a 180-degree turn. Given that both RQ-4 Global Hawks are too close to the Russian border, it is believed that they could have been exposed to electronic warfare from our side. But is this so, and what does international law say about this?

If you look at the comments of readers in the domestic media, then many of them directly call for the "jamming" of American intelligence officers. I would like to remind you that this topic we have to a certain extent already concernedanalyzing the call of a retired Russian admiral to attack US Navy destroyers entering the Black Sea using electronic warfare methods. Then we came to the conclusion that this is not a good idea, since American warships enter the water area and stay in it for 21 days in strict accordance with the Montreux Convention. As long as the Donald Cook or Porter remain in international waters and do not violate our state border, an electronic warfare attack on them by the RF Ministry of Defense will be considered a type of military aggression, which, if Washington wishes, can be interpreted by it as a casus belli.

Then a natural question arises: is an electronic warfare attack on American reconnaissance UAVs located in international airspace or in the skies over Ukraine with the permission of Kiev a "Russian aggression"? The question is extremely controversial.

On the one handThe RQ-4 Global Hawk performs quite legal reconnaissance activities. In accordance with articles 13 of the Russian law "On foreign intelligence", our own intelligence officers have the right to use information systems, video and audio recording, film and photography, information retrieval from technical communication channels, as well as other methods and means. The American Global Hawk is a strategic reconnaissance aircraft crammed with appropriate spy equipment. It is equipped with an integrated surveillance and reconnaissance system HISAR (Hughes Integrated Surveillance & Reconnaissance), SAR / MTI radar, optical and infrared sensor. This equipment makes it possible to obtain radar images of the terrain with a resolution of 1 meter, as well as to detect ground-based moving objects. All received data is transmitted from the drone via a broadband satellite channel at a speed of up to 50 Mbit / s or to a ground-based receiving transmitter in the line of sight. While in international or Ukrainian airspace with the permission of the authorities of this country, American military intelligence officers do not formally violate anything.

On the other hand, we do not live in some ideal, but in the real world, where the United States is waging a new "Cold War" against our country. The RQ-4 Global Hawk, as well as American and British reconnaissance aircraft, are studying the combat capabilities of the Russian army in Crimea and on the Ukrainian border for a reason. The fight, or "duel", between American and Russian intelligence services has a very long history. If we turn again to the already mentioned law "On Foreign Intelligence" of the Russian Federation, then it says that in the process of intelligence activities, the foreign intelligence agencies of the Russian Federation can use both overt and covert methods and means:

So, in 2020, a real "anti-drone shield" was deployed in the Kaliningrad region. According to the specialized Polish publication Defense24, the exercises of the Baltic Fleet practiced the fight against foreign attack UAVs, such as the American MQ-9 Reaper deployed in Estonia:

The Russians practiced protecting their own command post from attack by attack unmanned aerial vehicles from a potential enemy.
To do this, in the Kaliningrad region, the Ministry of Defense of the Russian Federation deployed a real electronic warfare dome, which gives our military many opportunities. First, Russian complexes can suppress the control channels of enemy UAVs and the transfer of intelligence from them. Secondly, even the satellite communication signal may be violated, as a result of which the control equipment of the drone will accumulate errors in determining its location. Thirdly, by combining these methods, it is possible to deceive the control system of the UAV, gradually changing its coordinates to false ones and taking it away from the route to the one needed by our military. In general, draw your own conclusions.
Ctrl Enter
Noticed oshЫbku Highlight text and press. Ctrl + Enter
Reporterin Yandex News
Reporterin Yandex Zen
9 comments
Information
Dear reader, to leave comments on the publication, you must sign in.