MS-21 airliner: there are risks, there is no plane 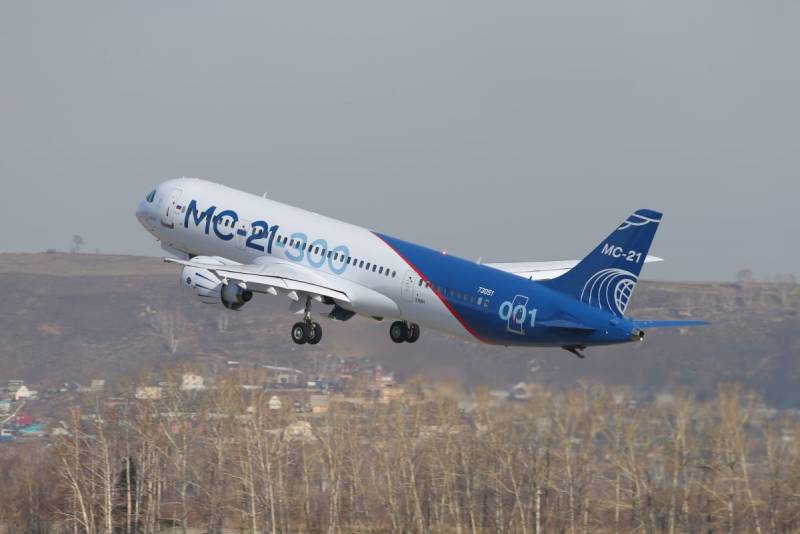 In memory of past successes

The new generation of Russians probably no longer remembers that once the country was actively flying in the domestic “Carcasses”. Tu-154 different versions were built over one thousand. He became the most massive Soviet jet passenger aircraft, until the end of the 2000s, was among the main winged aircraft on medium-range routes. But progress does not stand still. Already in the middle of the first decade of the new century, domestic companies began the gradual decommissioning of the Tu-154. The reason for this was not so much the development of a resource as the low fuel efficiency of the NK-8 and D-30KU engines. It is believed that the fuel consumption of the D-30 is almost two times greater than that of the western counterpart in the person of the very popular CFM56. This, of course, is palpable.

However, the Tu-154 itself is an old plane. He should not now dominate the market, even domestic. Worse is the other: the "relatively new" Tu-204, which they began to operate in 1996 and which was seen as a replacement for the 154th, “didn’t enter”.

The plane was released completely ridiculous by modern standards, a series of 80 units. In this case, it does not even make sense to talk about working out technical maintenance: it is not surprising that the airliner was eventually recognized as not economical. However, since the first flight in 1989, he really managed to partially become obsolete. They say that the project was completed by the unwillingness of the Tupolev company to actively promote its brainchild. But is it possible to blame something for people who, in the conditions of the 90s, simply wanted to survive, not hoping to compete with Western companies? The question is rhetorical.

One way or another, the consequences of the collapse of the industry were tangible. “Our market today is almost 80% - these are Airbus and Boeing,” said Deputy Chairman Dmitry Rogozin in 2017. There are no complaints about the capabilities of these machines. Another thing is important: now the authorities intend to oust foreign competitors from the domestic market. Well, then, if possible, compete in foreign directions.

Alas, the promising Sukhoi Superjet 100 did not become a lifeline. Moreover. Judging objectively, the Superjet is most correctly considered as a sample of a pen in the field of developing new passenger aircraft. For all its shortcomings, it must be admitted that this is not a Soviet development or a modernized version of what took off 30 years ago. Even the fact that Western SaM146 engines are on the machine cannot be called unambiguously bad or good. It’s simply impossible to build a motor that meets Western standards: there is no base, nor of technologies.

In short, in the case of the SSJ-100, the Russian aircraft industry simply decided for itself to understand: will it be possible to build a new car. Create a potentially successful aircraft, as they say, from scratch. It turned out to build, to sell - not really. As of June 2018, only 166 cars were produced. Almost all buyers are Russian companies.

It does not make sense to talk in detail about the MS-21. In short: this is a near-medium-range narrow-body passenger aircraft, which is seen as the “receiver” of the Tu-154 and Tu-204. A direct analogy between the SSJ-100 and the MC-21 should not be made. And not only because the second is significantly largest. If the commercial failure (gross, but correct in its definition) of the Superjet can be attributed to the unpreparedness of the Russian aviation industry for the production of new passenger aircraft, then the disinterest of customers in the MS-21, the project of which also spent hundreds of millions of dollars, will be a big blow to the country's image . It is quite obvious that it is impossible to invest giant money endlessly in the aviation industry, which, in principle, cannot be profitable. At some point, sound pragmatism will have to prevail.

Now behind the back of the MS-21 the first flight, which was performed on May 28, 2017. Two flight models and one for ground tests are currently being tested. It’s premature to talk about mass production. There can be a long evolutionary path in front of the machine, mainly related to the identification and elimination of the so-called "Childhood diseases." By itself, this fact should not confuse anyone: it is a common practice for any new aircraft. What is more important than the other. Nowadays, it is not difficult for a large state to produce anything. Oddly enough, this applies even to aircraft. A much more serious problem is to sell finished goods. And if for ordinary consumer goods you can always find demand, as well as for raw materials, then the complex and expensive aviation complex will literally have to be pushed into world markets.

Of course, there is a demand for passenger aircraft and it is much higher than for combat aircraft. The problem is that customers have long been divided among themselves by such giants of the aircraft industry as Boeing and Airbus. According to reports, the foreign market was contracted by these companies by 75% until 2025. They see the new domestic aircraft in Russia as a competitor for the Boeing-737 and Airbus A320, or rather, their new versions - the Boeing-737 MAX and Airbus A320neo. This is important, because the latest modifications of Western cars are distinguished by higher efficiency, increased safety and even greater comfort. According to the developer Irkut Corporation, the MS-21 outperforms its competitors due to its advanced aerodynamics, competitive price and high comfort (the car has an increased fuselage diameter). These kinds of statements look strange nowadays. It is naive to believe that Western, Brazilian or Chinese competitors have "poor" aerodynamics or lack of comfort.

The facts are much more important. And they say that the car, at least in the early stages, will be heavily dependent on Western components. The aircraft will use American PW1400G engines, then they intend to use the promising Russian PD-14. By the way, he recently passed the next stage of certification in accordance with the rules of the European Aviation Safety Agency (EASA), which gives some reason to believe in success.

In general, according to the statement of the Minister of Industry and Trade of the Russian Federation Denis Manturov, the share of Russian components on the MS-21 is about 50%. This, of course, is not only about the aforementioned engines. For example, the Swedish company CTT System provides anti-condensation systems, the interior design rests on the shoulders of the French Zodiac Aerospace, and the Irish Eaton is developing the hydraulics. Such a level of interaction, in principle, will not allow making the aircraft “cheap”. In the best case, its price will be approximately at the level of not the most expensive Western counterparts.

By the way, the previously announced cost of the car is approximately 72-85 million dollars, depending on the configuration. For comparison, the price of the Boeing 737 MAX starts at 96 million. His younger brother, the Boeing 737 Next Generation, starts at 78 million. Obviously, there is cause for concern, and it is more than serious. In fact, in the case of the MC-21, the buyer should get a "pig in a poke" at the price of a Boeing or Airbus. Would he agree to that?

In view of the above, knowledgeable experts as the main competitor for the MS-21 are not called American or European cars, but the promising Chinese Comac C919. In short, this is the first Chinese "large" passenger aircraft. It also still exists in the amount of two units and is also undergoing tests today. Now official rates for the C919 have not been submitted, but previously they called the figure of 50 million dollars. This is much less than the price of both the Boeing 737 MAX and the Russian MS-21. If the information is confirmed, then the low price will become a very serious trump card in the sleeve of Chinese aircraft manufacturers. By the way, it was previously reported that at the end of 2017, COMAC had already received orders for the fantastic 787 winged vehicles. Most of the customers, however, are from China itself.

Unfortunately, MS-21 cannot boast of such popularity. From open sources, we know that at the end of May 2018, the order portfolio for the MS-21 was 279 aircraft, of which only 185 were signed solid (advanced) contracts. Almost all customers are from Russia. Agreements with foreign customers are single and more reminiscent of declarations of intent and a demonstration of friendship. Recently, for example, it was reported that Syria is ready to buy new cars. You need to understand that this question lies almost exclusively in political plane and in no way indicates the real market potential of the aircraft.

At the same time, it is impossible to say unequivocally that the plane is unsuccessful. In theory, he will be able to find limited demand in the domestic market. By the way, it’s not long to wait for the debut: mass production is scheduled for 2019.
Ctrl Enter
Noticed oshЫbku Highlight text and press. Ctrl + Enter
We are
TOP-7 safest passenger aircraft in the world
The revival of IL-96: forward to the past
Reporterin Yandex News
Read Reporterin Google News
Ad
We are open to cooperation with authors in the news and analytical departments. A prerequisite is the ability to quickly analyze the text and check the facts, to write concisely and interestingly on political and economic topics. We offer flexible working hours and regular payments. Please send your responses with examples of work to olga.hr[email protected]
5 comments
Information
Dear reader, to leave comments on the publication, you must sign in.