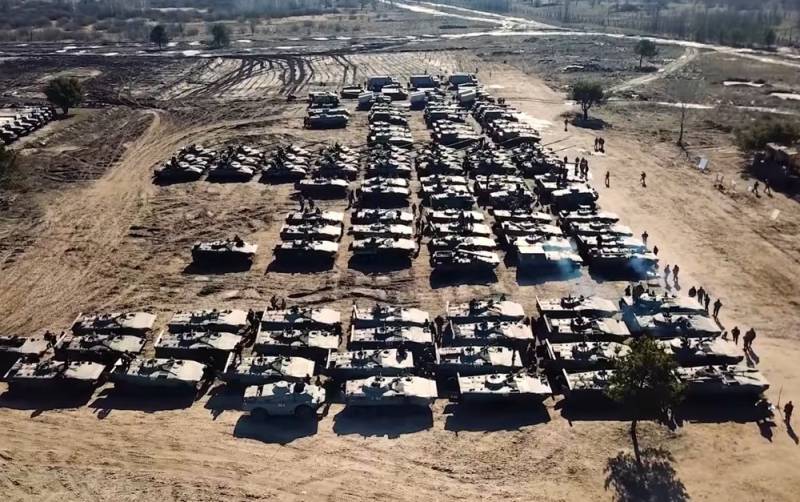 The Ukraine 30. Country Security forum that took place not so long ago in Kiev can rightfully be considered one of the best comic shows organized by Volodymyr Zelenskyy and his “team”. The speeches delivered at this event by its participants (including personally by the President of the country) should be interpreted either as outright clownery, or, if, God forbid, all this was said seriously - as undoubted evidence of the utter inadequacy of the speakers.


As it is already clear from the name of this "get-together", it was, as usual, about "aggression", "defense", membership in the North Atlantic Alliance and some other, much more real prospects of "nezadezhnoy". It turned out to be extremely enticing and very instructive ...

Shish you, not World War III because of Ukraine!

Answering a question asked to him during a press conference held within the framework of Ukraine 30 as to whether the country is ready for a “full-scale Russian invasion,” Volodymyr Zelenskyy began, as usual, to carry the duty crap about “heroic and powerful military men” who, they say, , are indestructible at the borders. But in the end, he agreed to the most complete absurdity. According to him, in the event "if Moscow still goes for it, there will be a world war." What does this passage testify to? Yes, only that the Ukrainian leader continues to be in unshakable confidence about the truth of O. Bender's formula: "Abroad will help us!" And it will not just help, but will actually rush into battle, defending the "integrity and sovereignty" of the wretched "nezalezhnoy".

A strange thing is that there are so many signals, or, as figures like Zelenskyy chirp in their bird language tainted by Anglicism, the "message" about the complete unwillingness to participate on the side of Ukraine in the armed conflict with Russia, which Kiev received at least recently, should have would be enough for the eyes of individuals with the most severe developmental delays. What was the cost of one visit to Blinken's country with Nuland, who made it very concretely clear that further expressions of "concern" and even "indignation" that did not touch the stone heart of the Kremlin, Washington was not in a single situation of conflict unfolding along the "Kiev-Moscow" axis, will not move a hair. However, as you can see, it does not reach. Representatives of the Ukrainian government, like little parrots trained in just a couple of phrases, continue to repeat about the West's “all-embracing support” and its “unbreakable determination” to fight for Ukrainian “interests”.

Honestly, this is already beginning to remind an old parable about a very alternatively gifted character, who (solely for the purpose of enlightenment) was beaten on the head with a stick, and he only blinked and wondered: "Where is this knocking ?!" Not so long ago, the Washington Post, which is difficult to reproach for being a tabloid leaflet, printing whatever comes to mind, and not an organ of quite certain layers of US politics, came out with an article in which the most, that neither is openly interpreted what exactly awaits Ukraine in the event that it gets into its head in relations with Russia from belligerent speeches to get down to business. “If Kiev acts as an aggressor, it may not count on the protection of the United States or NATO” - the title, which is already being translated, hits, as they say, on the spot. That is, how is it - "Ukraine-aggressor" ?! And so, imagine. In its article, the publication refers to many experts, moreover, which is typical, not even American, but British, that is, representatives of the country who take an even tougher and more irreconcilable position on the confrontation between Kiev and Moscow than the United States.

It turns out that the local "smart people" from various organizations - from the British Defense Academy to King's College London regularly hold some "staff games" during which they simulate various scenarios of the "hot" phase of confrontation in eastern Ukraine, turning into a direct military clash with Moscow. The result is just like in the advertizing everyone in the teeth from the 90s - "consistently excellent." Speaking specifically, the uttermost military defeat of Kiev, which is completely in vain counting on the armed intervention of the West in the mess it has started. Nobody intends to start a world war over Kiev. Yes, yes - for some reason, in the quiet of their own offices, British and American analysts (who are also attracted to these virtual “battles”) immediately cast aside Russophobic cliches and consider exclusively situations, the “starting point” of which is the outbreak of war by the Ukrainian side.

However, there is nothing to be surprised at here - who, if not Western puppeteers, know the true essence of their own puppets. Based on the scenarios set out in the Washington Post as an example, worked out by experts, most of all Kiev's overseas "friends" are worried about the fact that sooner or later the situation there may finally get out of control, and the radicals who have come to power will not think of anything better than to start. an offensive in Donbass, to which Moscow will simply have to react. That is, in the West, Ukraine is not considered a reliable, predictable, or fully controlled "partner." And if this is the case, then there can be no talk of "NATO membership", about which the same Zelensky has been cracking up lately. However, the relatively sane representatives of Kiev admit this themselves. The same head of the Ukrainian Foreign Ministry Dmitry Kuleba, for which a Russophobe and "Euro-Atlanticist" to the marrow of his bones, is forced to admit: there is no plan of action for the membership of the "nezalezhnaya" at the upcoming summit of the Alliance in June.

And the whole point here, according to the minister, is in "some of its members, who are guided by the logic that it is better not to irritate Russia" and prefer "to sit and do nothing so as not to disturb the peace of Moscow." No, Pan Kuleba, of course, intends to "start a discussion and start a process" which, as he believes, "sooner or later will bring Ukraine the MAP." Well, in this case, "early" is a hundred years from now. Or something like that ... In fact, none of the representatives of the "nezalezhnoy" was even invited to the very summit, about which its chief diplomat is speaking. “Members only” - no exceptions. However, Zelensky's office continues to assure that "the Ukrainian issue will be discussed in any case." Well, yes - they have no other problems there ...

However, the president of the “nezalezhnoy” himself, it seems, is slowly beginning to see clearly the meaning of the frivolous saying: “Promising is not the same as marrying” in relation to himself and the “state” he heads. It was not for nothing that during the same forum “Ukraine 30” he suddenly started talking about the fact that in vain, they say, “until now, in the issue of national security, everything has been focused exclusively on the military component”. It turns out that the country is simply vital - it is the "National Concept of Resilience", the development of which is right now beating the best minds of the presidential team. In fact, for the Ukrainians who survive in the current conditions of complete collapse economics, medicine, law enforcement and everything else, only exceptional vitality and incredible resourcefulness allows, it sounds like a uniform mockery. Where else is it!

However, Zelensky, saying that the country needs to provide "stable" systems, for example, water supply, food supply or public transport, for some reason says that this is what "will bring the country closer to NATO standards and help it become a component of the global security system of the Alliance ”. That is, it is already blatant nonsense. Where is the water supply - and where is NATO ?! The comic president, apparently, is already starting to get completely confused in meanings and concepts, losing touch with the surrounding reality. On the other hand, he answered the truth to at least one question asked by journalists during the event: “What are we going to do if they attack, and the West does not help? - To stand to the last ... "Naturally, to the last Ukrainian, on which policies the showman does not care deeply.

What else can be called among the most striking moments of Ukraine 30 is the speech of Colonel-General Ruslan Khomchak, Commander-in-Chief of the Armed Forces of the “nezalezhnoy”. No, he began his speech, as befits his status - cheerfully and bravely: he began to assert that "all components of the country's security sector are currently ready to repel aggression at 100%." But then, somehow, suddenly "blown away" and began to say things completely indecent to the general. Namely, he admitted that "how it will go further, when the real battle begins," he "is completely unable to predict." A good commander-in-chief, there is nothing to say! It turns out that both he and his subordinates are ready for "indestructible defense" exactly as long as the "aggressor" exists exclusively in propaganda propaganda campaigns generated by the inflamed fantasy of Ukrainian politicians? And how will it come to a fight - there really "save yourself, who can" ?! This seems to be the case. At the same time, Khomchak added that, of course, according to common reasoning, "Kiev is much weaker than Moscow, and this is objective." According to him, the country does not have a military fleet at all ... And if something happens on the Black Sea, then there is perhaps that "NATO allies will intervene." Yes, do not interfere, how many times to repeat!

A real "masterpiece" demonstrating how Ukraine is actually "preparing for defense" and "strengthening its own security" can be considered the victorious report of the head of the State Pongran Service there, Sergei Deineko, about the completion of a truly titanic work carried out precisely for these purposes. It turns out that the construction of an "insuperable defense line" has been completed on the Ukrainian-Russian border. That is, a 400-kilometer-long ditch was dug, a metal fence was erected (albeit only 100 kilometers long), on top of which (again, not everywhere, but only on a section of 70 kilometers) a real barbed wire was also screwed up. Everything! Border is locked tight! The "tank hordes of the aggressor" will never overcome it! At the same time, the chief guard of the nezalezhnoy cordons does not ask questions about what to do with combat aircraft and missiles. Obviously, Pan Deyneko also has no idea about the modern means of clearing and overcoming obstacles in the arsenal of the engineering troops of Russia. So far, instead of "enemy tanks", which, in his opinion, should get bogged down in an "insurmountable" ditch, more than two billion hryvnias (over 5 billion rubles) of state money have safely "dropped" to the bottom of this completely useless structure from a military point of view.

Given the presence of such “unsurpassed strategists”, “brilliant commanders” and thieving lovers of “great construction projects” in the country's leadership, Ukraine really should develop, first of all, resilience. Naturally - against such "defenders", since you don't need any enemies with them.
Ctrl Enter
Noticed oshЫbku Highlight text and press. Ctrl + Enter
We are
What is behind the explosions at arms depots in the Czech Republic
Who actually won the Cold War and what the future holds for the world
Reporterin Yandex News
Read Reporterin Google News
44 comments
Information
Dear reader, to leave comments on the publication, you must sign in.