Liner MC-21 is a platform for testing advanced Russian technologies 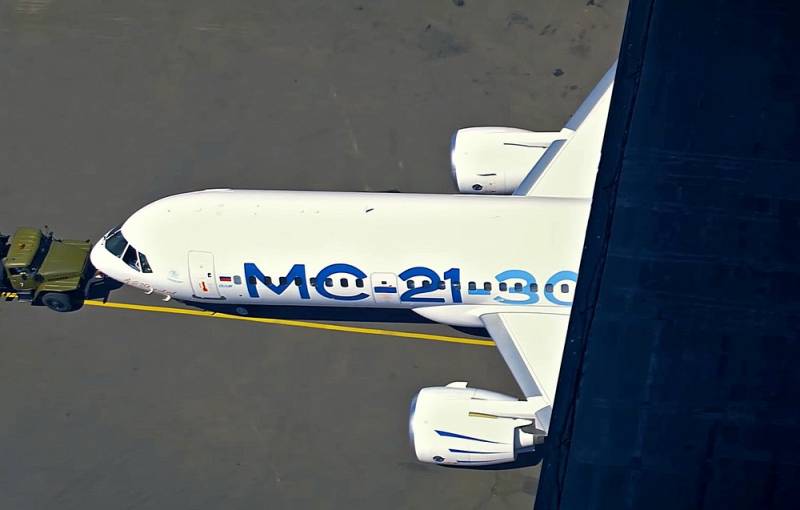 Two years ago, the United States imposed sanctions on the supply of composite materials to Russia required for the production of the "black wing" of the MC-21 medium-range liner. The leadership of the aircraft industry promised to make their import substitution as soon as possible, and now completely domestic "black wings" have arrived at the Irkutsk plant, where a promising aircraft is being developed. Why, then, can it rightfully be considered a real technological breakthrough, which the Americans tried so hard to stop or slow down?


The MC-21 is our first medium-haul liner designed from the ground up. Its certification is expected by the end of 2021, and serial production from 2025. The reason for such a delay and constant postponements to the right was the sanctions imposed by the United States. But why are they so scared in Washington? Irkut plans to produce up to 70 aircraft a year, while Boeing produces over six hundred airliners during the same period. For the sake of objectivity, it should be admitted that our MC-21 will be able to take a very small share of the world market. Is it really necessary for the United States to get involved with such restrictive measures for the sake of preserving it, which, frankly, does not do credit to American manufacturers?

In fact, everything is much more complicated, and the stakes are higher than they seem. The key point lies in the technologies that will be run in on the MS-21.

At first, this is, of course, the PD-14 aircraft engine. It is also a completely Russian development that meets all modern environmental standards. More importantly, it should become the ancestor of a whole family of power units: its derated version can be installed on the short-haul Superjet New instead of the problematic SaM-146 of the French design, and the more powerful version of the PD-18R (R - geared) - on the Tu-214, Il- 96-300 and Il-96-400T. In addition, to replace the Ukrainian helicopter engines on the basis of the PD-14 gas generator, a turboshaft PD-12V with a thrust of 11,5 tf for heavy rotorcraft should be developed. In general, some pluses are expected, and the promising power plant will be tested on the medium-haul MS-21.

Second, the It is extremely important for the revival of the domestic aircraft industry that the use of composite materials will be tested on the liner, their share in the MC-21 reaches 35%. Wings, keel and tail elements are assembled from composites. Due to its design features, our medium-range aircraft has the widest cabin of a narrow-body aircraft in its class. Undoubtedly, this is its competitive advantage. It is not surprising that the United States, defending the interests of its national producer, went through the introduction of restrictive measures against the Russian project, banning the supply of American and Japanese composites. The process of import substitution took two whole years, but the result was worth it.

It is interesting that in a number of media outlets all this time, the point of view that one should not engage in nonsense sounded very persistently. Allegedly, the "black wings" of the MC-21 will not give any advantage, and in general this is a dead-end path, since competitors from the USA and Europe make composite wings only for their heaviest wide-body airliners, where are we going. The most curious thing is that this is where the answer lies.

Indeed, the wide-body Boeing 787 Dreamliner and the super-wide-body Airbus A350 XWB have their "black wings". Their use was the result of intense competition between American and European corporations. The aircraft giants have grappled with each other to reduce aircraft weight and fuel consumption as much as possible in order to increase the interest of air carriers by maximizing the use of composite materials. The decrease in the weight of the liners made it possible to install additional on-board equipment on it to increase the comfort of passengers' flight. In addition, modern composite materials have a greater durability resource than metal ones. 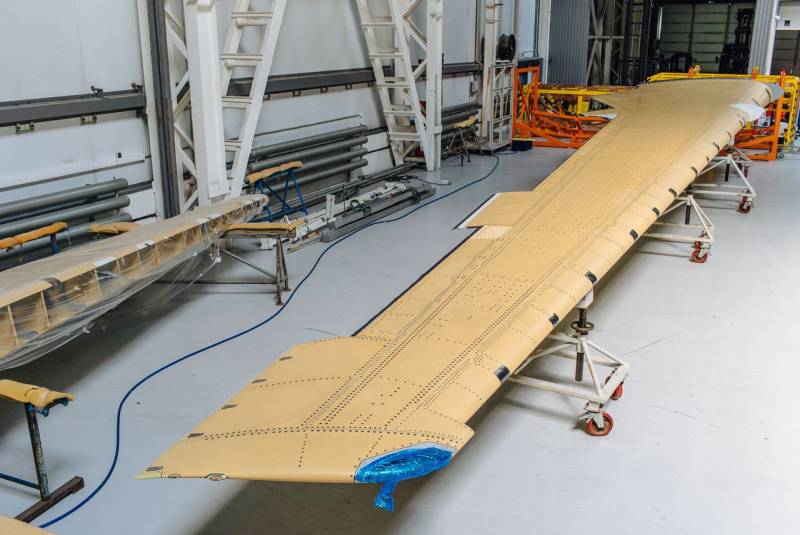 And this is where the fun begins. There are different Technology creation of composites. Airbus and Boeing have orders for large series of aircraft, and therefore began experimenting with relatively small, wide-body aircraft, relying on the so-called prepreg technology. According to this technique, each individual piece is “baked” in special autoclaves separately, and then they are assembled and re-“baked”. As a result, a certain boundary between different elements of the same part is maintained, and the overall strength is reduced. In MS-21, they went the other way. In the production of the Russian "black wing" vacuum infusion technology is used: carbon fabric is cut and laid out in layers in a special envelope, from where air is pumped out and a special polymer resin is poured. After all this is "baked" for 20 hours. On special equipment, the resulting stringers and panels are poured together with a binder, which results in a single, more durable and at the same time cheaper part than with the autoclave technology used by Airbus and Boeing.

Thus, on our medium-haul liner, the most advanced technologies are being developed, which can later be used in the production of promising wide-body aircraft in Russia. Perhaps the Americans still have something to strain. As you know, Russians harness for a long time, but then they drive quickly.
Reporterin Yandex News
Reporterin Yandex Zen
23 comments
Information
Dear reader, to leave comments on the publication, you must sign in.