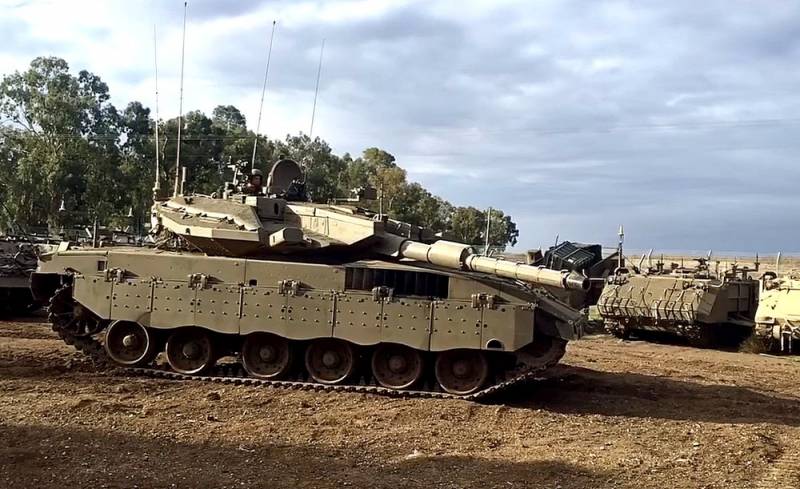 On Friday night, the Israeli army carried out an operation against the Palestinians in the Gaza Strip. Airstrikes on a network of underground tunnels used by militants of Arab groups, simultaneously inflicted 160 aircraft. At the same time, the IDF is considering the possibility of introducing troops and conducting a ground operation. More and more units of the Israeli army are being drawn to the border of the enclave. But what could a military invasion turn out to be for the Jewish state this time?


Reading the comments of the Russian-speaking Israelis, one can see how they sincerely regret that the IDF, under pressure from the international community, once withdrew its troops from the Gaza Strip. They say that Arab terrorists have now proliferated, there is no way for them to live for honest people, they have completely lost their fear, crossed the "red line", and now they will get nothing to spoil. And here's what I would like to say about their righteous anger.

Undoubtedly, the Palestinian-Israeli conflict, which relapsed a few days ago, is an extremely complex and multifaceted topic with very long roots. It is part of an even more complex and controversial Arab-Israeli conflict, where each side considers itself to be unconditionally right. In the most general terms, the problem is that the Jewish State of Israel was created on the territory of the British Mandate of Palestine in 1948, and the State of Palestine for the Arabs appeared only de jure, but not de facto. It has no real sovereignty and is essentially under Israeli occupation. There are two Palestinian exclaves divided by the territory of the Jewish state, the Gaza Strip and the West Bank. The first is controlled by militants of the Hamas movement (recognized as a terrorist organization in some countries), the second is controlled by Fatah. It is from the territory of the Gaza Strip that the periodic shelling of Israel is carried out.

Now for the legal side of the issue. The reason for the massive mutual rocket attacks was the harsh actions of the Israeli police (shooting at the crowd with rubber bullets and the use of stun grenades) near the Al-Aqsa Mosque, located on the Temple Mount, a sacred site for Muslims, as well as an attempt to evict six Palestinian families from their homes in the eastern parts of Jerusalem. I would like to make a short excursion into recent history.

The West Bank and East Jerusalem were captured by the Israelis following the Six Day War. Note that the UN General Assembly refused to recognize the legality of this annexation. Later Tel Aviv began policies the gradual squeezing out of the Arab population from the occupied territory: Jewish quarters, military bases began to be built in East Jerusalem, the city was surrounded by the so-called "security perimeter", dividing it into Western and Eastern parts. In 2009, the "Report of the Heads of the EU Mission for East Jerusalem" was released (not at all the Kremlin propaganda), in which the following summary was made:

Israel's “reality” - including new settlements, the erection of a barrier, discriminatory housing policies, house demolitions, restrictive permitting regimes and the continued closure of Palestinian institutions - strengthens the Jewish Israeli presence in East Jerusalem, weakens the Palestinian community in the city, complicates Palestinian urban development, and separates East Jerusalem from the rest of the West Bank.
In fact, the Palestinian families mentioned above were subject to eviction from their homes in East Jerusalem as part of this policy. The Israeli organization Nahalat Shimon intended to free up "living space" for new settlers under the Israeli law of 1970 on legal and administrative issues, which gives Jews the right to claim land and real estate that they owned before the emergence of the State of Israel. And now, having dealt with the legal side of the issue, let's move on to the military component.

The international community calls on Israel and Palestine for peace, and the United States even sent its special envoy to Jerusalem to mediate in the negotiations. However, Tel Aviv is still in a very belligerent mood, wanting to "restore order" in the Gaza Strip. The IDF declares that the ground forces are ready to move forward. What could be the goals of such a military operation?

On the one hand, the Palestinians can be punished within the framework of a limited operation: to carry out a powerful missile and bomb strike to destroy underground tunnels and other objects of the Arab military infrastructure, to rapidly lead troops and occupy key points. On the other hand, quite a lot has changed by 2021. Hamas militants have rockets that hit 100-120 kilometers, and in order to get them, they will have to go far into residential buildings. Now the Arab groupings have powerful anti-tank systems and grenade launchers, they will undoubtedly mine all approaches to their positions. This means that the Israelis will not be able to take an easy walk and blitzkrieg, and the punitive operation in the occupied Palestinian territories will result in significant losses in technology and manpower.

Merkavas will burn, Israeli commandos will die, and no vaunted attack drones will be able to provide a cleanup. All that remains in this case for Tel Aviv is to conduct a demonstrative local action under the cameras and quickly retire in order to avoid reputation losses.
Ctrl Enter
Noticed oshЫbku Highlight text and press. Ctrl + Enter
Reporterin Yandex News
Reporterin Yandex Zen
123 comments
Information
Dear reader, to leave comments on the publication, you must sign in.