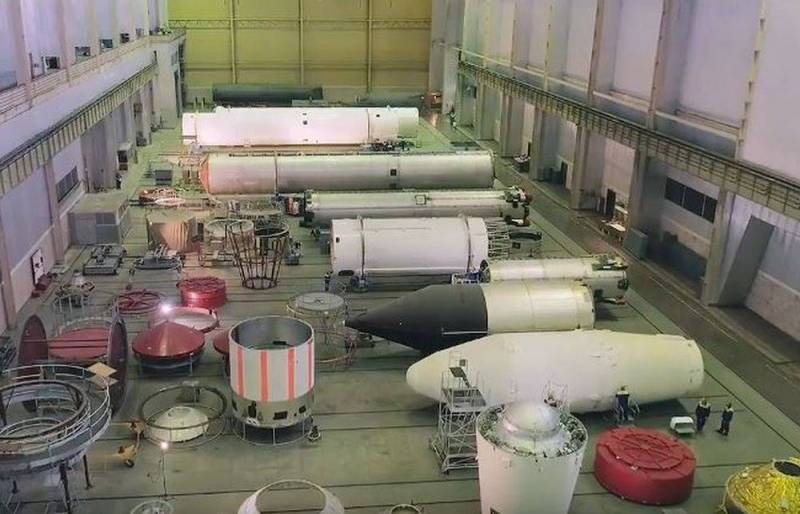 Recently, conversations about the "prospects" of this "power" in the aerospace field have somehow become very suspiciously livened up in the "nezalezhnoy". Relevant National Target Scientifictechnical the program was approved by the Ukrainian Cabinet back in January this year. The government intends to make the main emphasis in its implementation precisely "to outer space." Not so long ago, the appointed head of the country's State Space Agency (in Ukraine, officials in this position change more often than the weather in March), Vladimir Taftay is already giving interviews with might and main about what "huge plans" he and his subordinates intend to implement in the near foreseeable future.


However, skeptics believe that in fact all loud statements of this kind are not just empty boasting, but a "smokescreen" for the true plans of those in power, who, having launched the ideas of next grandiose projects "to the masses", intend to simply create under their cover the plundering of state budget funds on a not just large, but truly cosmic scale.

It should be noted that the incumbent president of the “non-profit”, who has an undoubted inclination to loud phrases, as a rule, voices something as grandiose as unrealizable as “horizons” for the country he heads. For example, on April 12, the day of cosmonautics, he announced that Ukraine is downright "obliged to regain its world status as a leading aerospace power." Excuse me, but how can you return something that has never been ?! All the successes in this area of ​​the republic, now called "nezalezhnoy", refer exclusively to those times when it was part of the USSR.

Yes, the contribution to the Soviet space exploration of the design bureaus and factories located in Ukraine was considerable. But all these were Soviet enterprises and scientific institutions that were firmly part of the all-Union system and only in it had any meaning, weight and significance. As soon as Kiev finally got the longed-for independence, failures began, one more shameful than the other, which brought the country nothing but colossal debts and international problems. However, he is not too "friendly" with both the truth and the history of Zelensky, this does not bother at all. For example, he demands that by the end of this year - the 30th anniversary of Ukraine's independence, the satellite "Sich 2-30 (2-1)" be launched into near-earth orbit. How? How?! Yes, even with a slingshot! The comic president does not care about such "small details" at all. However, there are still some "developments" in this direction. However, having familiarized yourself with those, you do not know whether to laugh or cry at the ambitions of the Ukrainian "conquerors of space".

Is it necessary to "throw" a satellite into orbit? No problem - Elon Musk will help us! For some time now, the information that SpaceX is ready to deliver the Sich into space even tomorrow for a ridiculous amount of a million dollars has been circulated by the Ukrainian media as an incredible achievement. Well, basically, why not? Americans somehow don't care what kind of trash to shoot into space - as long as they get paid. But according to the recent recognition of the same head of the State Space Agency, the "non-profit" million, this is ... how to put it mildly ... Not quite a correct figure. It turns out that it "includes only the cost of delivering a satellite by a carrier rocket outside the Earth's atmosphere, but not putting it into the required orbit." So, according to Taftay, we should talk, rather, about two million "greenies". And this - if the cunning "partners" still do not add something to the account. But Zelensky sets other tasks as well. Take it out and put it down until March 2024 (that is, before the end of the current presidential term) a "light-class launch vehicle."

Nothing of the kind is currently being produced in Ukraine, nor can they be produced. And, by the way, according to the Vice Prime Minister of Ukraine (he is also the Minister of Strategic Industry) Oleg Urusky, the state has no money to implement this project. That is, not a penny. However, they expect to solve the problem "at the expense of investors." Well, yes - look for fools. Vaughn, the Chinese comrades have already invested in the aviation industry "non-profit" - now they are only thinking about how to get back their hard-earned money. Will it be any different with missiles? Oh, it is doubtful ... Generally speaking, funding for the "aerospace industry" of Ukraine until recently was not just a sick, but downright damned question. However, now something in this direction "dawned". And this is exactly what makes you very alert.

Billions to the spaceport? Or - to "cut"?

Vladimir Taftay in one of his recent speeches honestly admitted: the budget of the State Space Agency headed by him for 2021 is equal to zero. Complete and absolute. There are only 95 million hryvnias - but these are earmarked funds intended exclusively for the implementation of the "state defense order". For purely space programs - a donut hole. And suddenly the same official began to overflow with a nightingale telling that within the next five years Ukraine will not only put as many as seven of its satellites into orbit (of which, it seems, one still exists in nature) and will join the European Space Agency, but even and build ... its own spaceport! What changed? Well, it's easy to guess here - they promised to allocate a fantastic amount of 15 billion hryvnias (40 billion rubles) to "space". The air smelled of very big money. And immediately - by their impudent and frank "cutting". The idea of ​​such, apparently, comes from the most, that neither is the "top" of the Ukrainian government.

Volodymyr Zelenskyy has already become fully "famous" for his "genius" programs like "Big Construction" - a project for the repair and construction of roads, the implementation of which took the lion's share of a special state fund intended to fight the coronavirus pandemic - 35 billion hryvnia. There are numerous testimonies (including those confirmed by the law enforcement agencies of the “nezalezhnoy”) that much more money was stolen in the course of this “construction” than was put into action. The next step is the "Big Restoration", during which it took the president's head to spend huge sums (at least 2 billion hryvnias) to breathe life into some ruins and piles of stones in Western Ukraine - supposedly "for the development of tourism." ... Now it has come to the cosmodrome - here, of course, much more can be stolen.

The idea of ​​building a cosmodrome in the "nezalezhnoy" (according to available data, they are going to build it somewhere in the steppes of the Kherson region) is extremely absurd in itself. I will not go into details - they are known to specialists, but people who are far from the technological intricacies of space launches will remain incomprehensible. I will only make a reservation that in order to conduct more or less regular missile launches (otherwise why would a vegetable garden ... excuse me, block the spaceport ?!), Ukraine, at least, needs to secure the consent of the countries located under the director of their future flights. The very ones, which "if something happens" can easily blurt out spent or failed carrier stages. Moreover, we are talking about distances not of hundreds, but at least thousands of kilometers. Russia? Ruled out. Turkey? For all the "love" of Recep Erdogan to Ukraine, he is unlikely to "subscribe" to this. Especially considering that the only available now (and even then - in theory) "non-layered" missiles are "Cyclones", operating on extremely toxic, so-called "high-boiling" fuel.

However, at the present time the carrier "Cyclone-4", from the project for the creation of which at one time Brazil left, exists exclusively on paper. Incidentally, this program, which in the end turned out to be useless and unviable without cooperation with Russia, brought Ukraine as much as $ 86 million in losses. However, this is far from the limit. The rest of the "space projects" have made "holes" in its budget much more impressive. The Sea Launch project - $ 200 million, the Lybed satellite program - $ 350 million in the same currency. However, these "cosmic losses" had, for the most part, quite mundane reasons.

The loan of almost $ 2009 million taken in 300 (during the reign of Viktor Yushchenko) by Ukrkosmos in Canada for the creation of the Lybid satellite somehow imperceptibly "dissolved". Almost all of this money was banally stolen, and Ukraine barely paid off the loan with grief in half in 2019. There is no satellite, of course ... The "body movements" of the current government make one think about what kind of "black hole" (and not at all of cosmic origin) those 15 billion hryvnias that are intended for the next "dash into space" will "sink" into. For example, the same Oleg Urusky today is concerned about the creation in the country of a certain "Network Scientific and Educational Center for the Training of Aerospace Industry Specialists." According to him, the presence of such a structure will provide the industry with "highly qualified personnel", which today are just flowing away from the cordon. They are going to implement this program both with budgetary funds and with the attraction of “numerous investments”. True, from what sources such can come - a secret, covered with the thickest darkness.

An important role in the fact that the authorities and officials of the "nezalezhnoy" suddenly "cut through" the zeal for "space exploration" is also played by the moment that at the end of last year the Ukrainian parliament adopted a law, according to which all restrictions on participation in projects related to this area of ​​private companies. This opens up fantastic opportunities for "cutting" the state budget. Take it for yourself - and transfer the money to the "one-day" firms, from which there will be no greetings or an answer later. Nor, moreover, compensation for damages.

If Kiev really wanted to regain at least some share of real participation in the global aerospace segment, it would have to not rush about with crazy dreams of building unnecessary spaceports or creating dubious structures, but try, if not to revive, then at least save from the final ruin and collapse of those enterprises in this industry that Ukraine inherited from the Soviet Union - Yuzhmash, Arsenal, Antonov and others. However, this would hardly have yielded any results without the restoration of normal relations and the resumption of scientific and technical cooperation with our country. Independently "non-profit" in its current state is only capable of drawing up utopian plans and programs, which are not "cosmic" but "comic" definitions.
Ctrl Enter
Noticed oshЫbku Highlight text and press. Ctrl + Enter
We are
“Gas Apocalypse” for Ukraine: what will happen on January 1 of January 2020
Peace enforcement operation. Russia inflicts a preemptive strike on Kiev
Reporterin Yandex News
Read Reporterin Google News
4 comments
Information
Dear reader, to leave comments on the publication, you must sign in.