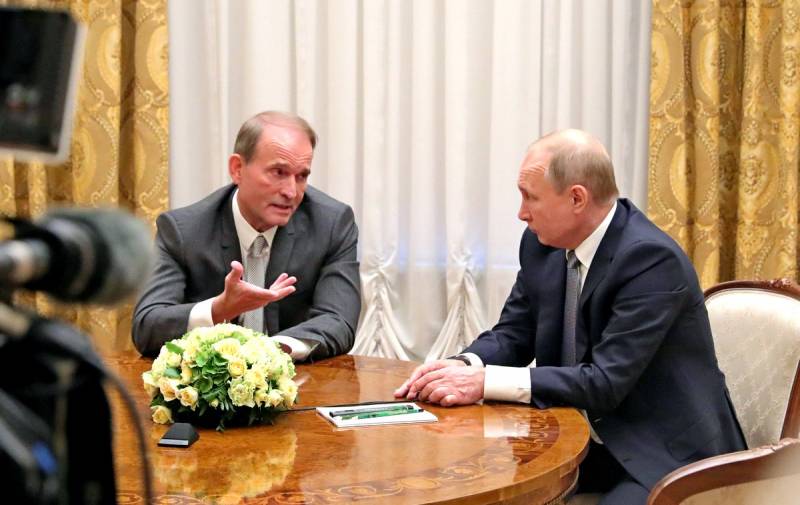 
Of course, the administration of the current head of the “nezalezhnaya” Volodymyr Zelensky, from which, in fact, comes the initiative regarding the persecution of the deputies declared “traitors”, cannot fail to understand this. So what is the real meaning of the repressive show, which was started by him and his "team", which is dubious from a legal point of view? Let's try to figure it out.

It is absolutely clear that all Viktor Medvedchuk's “fault” before the state of Ukraine, or rather, before its current government, is that this politician allows himself those things that, since 2014, are complete and indisputable in the “non-profit” taboo. He uses the name of our country without the prefix "aggressor", publicly advocates the normalization of relations between Kiev and Moscow, communicates normally with representatives of the Donetsk and Lugansk people's republics and even (oh, horror!) Periodically allows himself visits not only to Russia, but straight to the Kremlin, where he meets with Vladimir Putin himself and other high-ranking officials from the highest echelons of Russian government and business. And ... Yes, Viktor Medvedchuk is indeed the godfather of the President of Russia, who in 2004 acted as the godfather of the politician's daughter, Daria.

And this is perhaps the most important thing. Yes, yes - precisely the desire to "hook" Vladimir Vladimirovich for something personal, and not in any way the "pro-Russian" character of Medvedchuk or his mythical "work for the Kremlin." In no case is it worth idealizing Viktor Vladimirovich, trying on the laurels of a “fighter against the regime” or, even more so, the crown of a “martyr for an idea”. Like all Ukrainian politicians (and Medvedchuk is a real patriarch in this field), this character is very rich (a fortune of $ 620 million, according to Forbes, which placed him in 12th place in the list of the wealthiest Ukrainians), extremely pragmatic and not too burdened with principles. Others in the Ukrainian political serpentarium simply do not survive, and Medvedchuk feels quite well in it, not only for years or decades. Under various authorities, mind you.

With a certain degree of stretch, he can be considered “pro-Russian” only because his business interests are “tied” to our country to the greatest extent and it is in this country that he has contacts at the highest level. In order to avoid accusations of bias, I will give just one example - the Social Democratic Party of Ukraine (SDPU) created by Medvedchuk in due time “drowned” for the country's “European choice”, its accession to the EU and the like. Subsequently, in 2012, the organization "Ukrainian Choice", behind which stood the same politician, was the mouthpiece of the most ardent opponents of "European integration" and agitators for Kiev's entry into the Customs Union. How so? It's very simple. The priorities have changed in accordance with the business environment, that's all. By the way, Medvedchuk, who was called by many as "the right hand" and who was "the gray cardinal" of Leonid Kuchma for some reason, did not undertake anything even during the period when this president began to very clearly "tilt" towards the West giving birth to "masterpieces" like the book "Ukraine is not Russia", or later, during the so-called "Orange Revolution", or rather, the first Ukrainian "Maidan", inspired by the United States.

However, during the second, neither he nor his associates took any real action to prevent a coup d'etat in full swing in the country. Obviously, this is why he was allowed "political reincarnation" in the form of a seat in parliament and the leadership of the PLWH. Both him and the mentioned party were tolerated as a completely acceptable (that is, completely safe and useless) "opposition." Until now ... So what has suddenly changed so much that the Ukrainian Prosecutor General's Office today is downright eager to plunge Viktor Vladimirovich into the bowels of a gloomy prison, or even "roll him" behind bars for all 10-15 years?

It should be mentioned that the current attempt to "pin" high treason "on Medvedchuk is not the first. A criminal case under this article has already been initiated against him by the same Prosecutor General's Office in the summer of 2020 after a visit to Moscow and a visit to the Kremlin that made a lot of noise. It all ended then as expected - that is, nothing. However, this time the case seems to be taken seriously - sorry for the pun. It makes no sense to list all that absurdity that has been overflowing for the third day in the Ukrainian media, relaying the revelations of "law enforcement officers", therefore, I will briefly outline the essence. First of all, Medvedchuk (and Kozak, which is called a “trailer”), are charged with “transferring into Russian ownership” the Glubokoe gas field located on the Black Sea shelf of Crimea in the allegedly “exclusive economic zone of Ukraine ". Thus, according to the employees of the SBU and the Prosecutor General's Office, he "contributed to the plundering of the national property by the occupiers." The stupidity is fantastic.

First, they are trying to present the case as if, without Medvedchuk's help, the Russian side would never have guessed about the field under its nose. Secondly, no gas is produced at the "deep", because in this area now (according to the very same Ukrainian attorney general!) "A military training ground is underway." That is, in principle, there can be no question of any material damage. As for the re-registration of the company that previously owned “Gluboky” from the Ukrainian jurisdiction to the Russian one, many citizens of the “nezalezhnoy” did the same with their property - some of their own free will, some of them forced. Are they all "traitors" too?

However, the second point of the accusation is even more enchanting. According to him, Viktor Medvedchuk personally first collected and then “transmitted through Taras Kozak to the Russian special services” some “top secret information” either about one of the units of the Armed Forces of Ukraine, or about some “disguised object”, again, military use. Now this is just nonsense. Moreover, such an impression that only the imagination of the scriptwriters suffering from the extreme bad taste of clown shows could give birth. As you can see, Vladimir Zelensky is completely unable to go beyond the framework of this genre, which is firmly ingrained in his blood and consciousness. It is simply impossible to imagine such "espionage games" for the fifth grade performed by a politician and businessman of the scale that Medvedchuk has. The third point of "treason" also looks no less ridiculous and strained - it concerns the organization "Promin" ("Ray"), which did truly terrible things: it gave grants to talented students from Ukraine for their subsequent study at one of the universities in St. Petersburg. There, the poor fellows, of course, immediately fell into the clawed paws of FSB and GRU agents, who immediately began to "recruit" them to carry out subversive activities against Ukraine, or even completely to turn into the new Petrovs and Boshirovs. This is utter nonsense, if only due to the fact that any relation of Medvedchuk to “Promin” has not been proven anywhere. And, by the way, neither the SBU nor the Prosecutor General's Office can, for the life of me, name a single name of the “recruited”. Naturally, due to the complete absence of such. And, nevertheless, no matter how absurd and ridiculous all this heap of ridiculous accusations may look, the General Prosecutor's Office, where the politician had to personally appear in order to get acquainted with the essence of the claims put forward against him and "delivery of suspicion", already demands the arrest of "a traitor, a plunderer of mineral resources and the perverter of students ”.

At the time of this writing, Viktor Medvedchuk is at large and declares that he has no intentions to leave the country (which is clearly expected of him). According to him, he is going to "fight for justice" and leave no stone unturned from "unmotivated and illegal accusations." I must say that in the mouth of Viktor Vladimirovich this does not sound empty boast - after all, a lawyer by education and profession with a fair amount of practice, moreover, more importantly, he has a very solid staff of lawyers behind his back, with whom many prefer not to get involved - and not only in Ukraine. However, in this particular case, the issue will obviously be resolved not at all in the plane of the law. The personal sanctions imposed by the National Security and Defense Council against Medvedchuk and Kozak in February this year, attacks on their businesses and the media controlled by these politicians initiated by the presidential office, were supposed to simply "squeeze" them out of the country. At least from her political life. However, accustomed to the fact that the Ukrainian authorities, as a rule, do not go further than demonstrative demarches in relations with people of a certain level, the deputies showed "incomprehensibility" and stubbornness. And now things have come to extreme measures.

The problem is that Zelensky desperately needs to follow the direct and unambiguous instructions he received from London and Washington to "restore order" in the country. That is, the destruction of everything in it that, at least hypothetically, could be called “pro-Russian”. So he goes out of his way, demonstrating that he is ready for anything in his zeal to curry favor with the "senior partners". On the other hand, this clown, in which the complete inability to think in terms of statesman is superimposed on the painful vanity of the narcissist, really wants to somehow take revenge on Vladimir Putin, who regularly inflicts extremely painful blows on this vanity. What can he do for this? Well, except perhaps to arrange a clownery with the "landing" of the president's godfather ... He does this. Interestingly, Vladimir Putin's press secretary Dmitry Peskov, when asked directly whether Russia would provide assistance to Medvedchuk, replied that, firstly, he did not ask for any help, and, secondly, our country “is not going to interfere in the internal affairs of Ukraine and is unlikely to be able to help in any way ”the politician in the current situation. And, by the way, he stressed that Medvedchuk in the eyes of the Kremlin is "not a pro-Russian, but a pro-Ukrainian politician." Simply - one of the sane ...

It seems that while expecting some immediate and harsh action from the Russian leadership, Ukraine has miscalculated. The answer will follow - there is no doubt about it. It is not known whether the lackey rage of Zelensky in Washington and London will be appreciated, but Moscow will definitely not remain in debt. And Kiev is unlikely to like it ...
Ctrl Enter
Noticed oshЫbku Highlight text and press. Ctrl + Enter
We are
"We must beat first": the geopolitical alignment around Russia is continuously deteriorating
Ukraine from the inside: traitors, curators and those who watch from the Kremlin
Reporterin Yandex News
Read Reporterin Google News
8 comments
Information
Dear reader, to leave comments on the publication, you must sign in.