July 20 2018
2
Wheat has always been one of the main grain crops in Russia, and its export played an important role in the incomes of our country. Therefore, so close attention is paid to the Russian crop and abroad. In the USA, they carefully study the situation in Russian agriculture and analyze it, estimating the approximate volumes of the crop in each year. Why do Americans need this? Firstly, “the enemy must be known by sight,” including his food security, too. Secondly, such forecasts make it possible to influence the situation in the Russian agricultural industry. 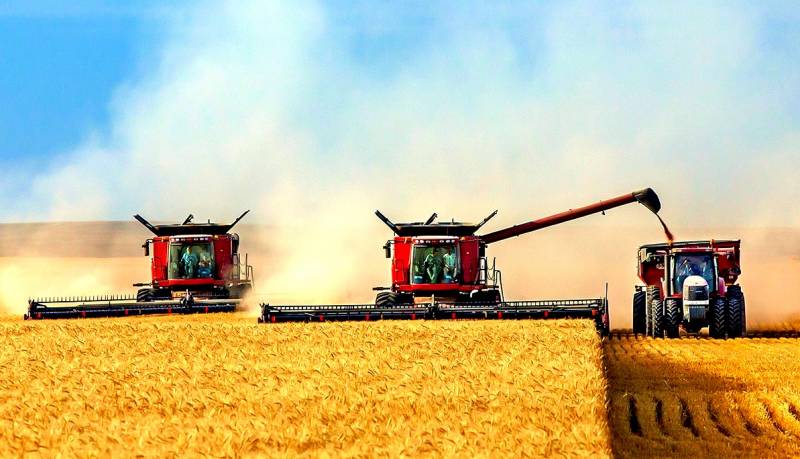 Oddly enough, but our officials responsible for the state of affairs in the agricultural sector are often conducted on similar studies by American analysts and predict that a much smaller crop will be harvested in Russia than actually. For example, the US Department of Agriculture's Foreign Service (USDA) emphasizes that in 2018, 67,0 million tons of wheat will be harvested in Russia, which is 18 million tons less than in 2017. Officials of the Russian Ministry of Agriculture, who also call the Americans, will echo the Americans. lower numbers - 64,4 million tons.

Interestingly, American forecasts do not include crops harvested in Crimea, although the peninsula has been Russian for four years. But American experts consider the Ukrainian crop, including Crimea, to be part of Ukraine. It turns out that, for reasons of political correctness, American agrarian experts publish forecasts that do not take into account the real situation. For the United States, it is important to help Ukraine increase the pace of sales of its agricultural products, primarily cereals. The Ukrainian agricultural industry is increasingly falling under the influence of American companies, which means that an increase in the export of Ukrainian wheat is beginning to be of strategic interest to Washington.

Why should the Americans artificially lower the volume of the Russian crop? Everything is quite obvious. With the help of such forecasts, the structures of the US government influence the sales of Russian grain. Third countries, forming their consumer policiesare guided by USDA data. Domestic manufacturers also can not properly navigate. Therefore, the Russian Ministry of Agriculture in no case should go on about the American analysts, whose calculations are biased and biased. The Americans seek to squeeze Russia on the world grain market. Of course, in the current situation, Ukraine Russia is not a competitor, because for 27 years of independence the Ukrainian agricultural complex has suffered even more than the Russian one, but the Americans are always ready to harm Russia, even if it’s minor.
Ctrl Enter
Noticed oshЫbku Highlight text and press. Ctrl + Enter
We are
Harvest death: what threatens Russia with this?
The opposite effect: Russia will be able to make great money on US sanctions
Reporterin Yandex News
Read Reporterin Google News
2 comments
Information
Dear reader, to leave comments on the publication, you must sign in.