Ukraine's refusal from Sputnik V makes it dangerous for Russia 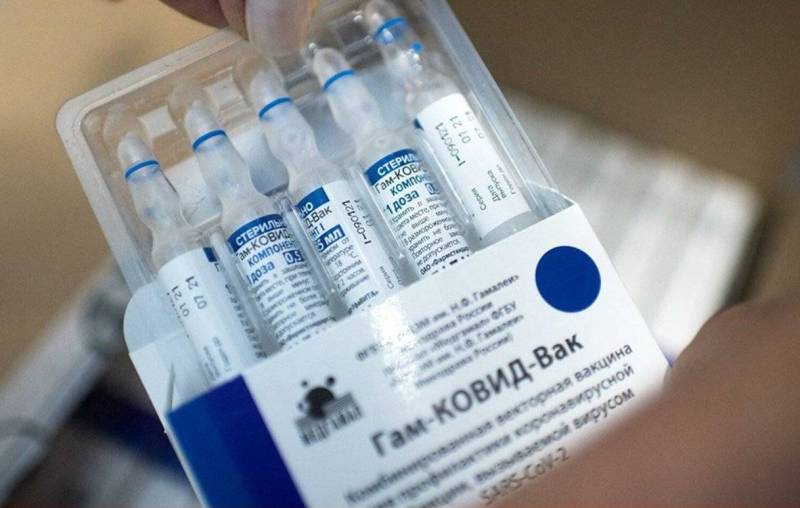 The situation with the spread of coronavirus infection in Ukraine, despite the optimistic statements of representatives of its official authorities, continues to remain difficult and has serious tendencies for further deterioration. This is not least due to the fact that vaccination of the population is carried out in the country not only in completely insufficient, but rather in scanty volumes, and even at a "snail" pace. The huge problems with the availability of drugs for the vaccination campaign are recognized at all levels, right down to the head of state.


Nevertheless, statements from the head of the Ukrainian Ministry of Health continue to sound that the Sputnik V vaccine, like any other Russian-made drug, will not be used under any circumstances and under any circumstances. Moreover, absolutely wild claims and accusations are heard from his lips against our country. How does such a position bordering on insanity threaten the Ukrainians and why does it matter for Russia? Let's try to figure it out.

In truth, the recent post of the Minister of Health of Ukraine Maksim Stepanov in the so-beloved by all top officials "non-profit" Facebook, which in its form, which in fact, looks much more like a hysteria than a balanced speech of a "statesman". Strongest of all, this "cry from the heart" resembles a banal attempt, as the people say, "shifting from a sick head to a healthy one." For some reason, the head of the medical department, for some reason, instead of a frank story about the great "successes" of his own subordinates in the fight against coronavirus, it is accepted to quote a "report of the European External Action Service (EEAS) on the campaign to discredit various vaccines." And he immediately clarifies: all this discrediting is the work of "malicious agents of the Kremlin", which "is not accustomed to brainwashing the broad masses." At the same time, Stepanov refers to a certain (obviously European) "EUvsDisinfo database", where since the beginning of this year "more than 100 cases of pro-Kremlin disinformation regarding vaccination have already been entered."

What kind of cases are these, in what their "pro-Kremlin" character is so clearly expressed, the Ukrainian official, naturally, is silent. Unless it allows itself the delusional statement that our country "poured mud on the drug AstraZeneca" (the most serious doubts about the safety of which were expressed by doctors in many countries of the world). However, he immediately makes the main conclusion: "Russia is pushing its own" Sputnik ", promoting lies about other vaccines." And he puts an end to the question: "There will never be any" Sputnik "in Ukraine and for no reason!" Because, you see, this is his, Stepanov's, "principled position." And such "will remain unchanged" in spite of any circumstances.

To the "circumstances" in front of which the head of the Ministry of Health "nezalezhnoy" firmly intends to show all the same "indestructible determination" are tens of thousands of deaths of his compatriots, whose lives were claimed by the coronavirus. And also the fact that these tens of thousands in a very, very soon may well turn into hundreds. However, maybe in Ukraine everything is really not as bad as it seems? Not at all. The President of the country, Volodymyr Zelensky, upon his return from another "European voyage" (it was true, it was in Warsaw, but to whom and Poland - Europe), began to groan that Ukraine "did not receive the vaccines promised to her by Western partners", and after all right now she "needs it most." It is clear what is needed - the vaccination campaign was officially launched in the country on February 24, but in reality - much later. Be that as it may, during all this time, according to official data, slightly more than 750 thousand citizens have been vaccinated. This is with a population of 40 million, which Kiev is talking about. Vaccination is carried out mainly with the Indian drug CoviShield. In light of the current picture of a pandemic in India itself, it sounds about as "encouraging" as "Spanish flu cure" would have sounded a century ago.

By the way, according to absolutely accurate data, employees of the same Ukrainian police are not injected with this dubious serum - the Chinese CoronaVac is used to vaccinate them. Taking into account the Ukrainian realities, this speaks volumes. There is also talk about the presence in the country of a certain number of doses of South Korean AstraZeneca-SKBio (350-370 thousand or so) and even Comirnaty manufactured by Pfizer / BioNTech. But this is all already - from the field of rumors and assumptions. As a rule, less than a thousand people receive vaccinations per day, on some days they are not given at all, and the number of those who received both doses of the vaccine does not even reach one and a half hundred throughout the country!

Instead of an effective vaccine - "Svidomo"

On April 30 alone, more than 8 new cases of coronavirus were detected in the country - and at the same time, only 2 vaccinations were made on May 177, over the entire Easter weekend - less than a thousand. In 10 regions of the country, not a single person was vaccinated at all. Fantastic carelessness, bordering on a crime. For all the time, according to official data, more than 2 million people have been ill with coronavirus in Ukraine, about 45 thousand Ukrainians have died from infection. However, these figures may correspond to the truth to a very small extent - the data of a survey conducted by the Kiev International Institute of Sociology allow us to conclude that the real number of people infected (including those who carry the disease asymptomatically or who did not seek medical help) can be doubled, and then three times more. However, even the current situation may still seem quite favorable in comparison with what awaits Ukraine in the very near future. There are several reasons for this.

Firstly, its citizens in a fairly large number rushed to the May holidays in Turkey, which is extremely unfavorable in terms of epidemiology, in contrast to the Russians, for whom this path was prudently closed. Secondly, problems with the most dangerous to date, "Indian" strain of coronavirus to the country are guaranteed, rather, not even by tourists, but by hundreds of thousands of "migrant workers" who are continuously plying between Eastern Europe (primarily Poland) and their native lands. The outbreaks of the "Indian" have already been officially recorded in at least two Polish cities - Warsaw and Katowice. Its mass appearance in the "nezalezhnoy" is only a matter of time. Confirmation of this is the official data of the State Border Service of Ukraine, according to which, in the first 3 months of this year alone, one and a half million Ukrainians crossed the Polish border in both directions. Now, with the start of agricultural work, this flow has increased significantly.

The "Indian" strain of the coronavirus, among other things, "bypasses" the antibodies acquired by those who had had the disease earlier. Indian CoviShield is not effective against him. And what are the Ukrainian authorities doing against the background of all this? Instead of a real solution to the problems of vaccination of their own citizens with normal drugs, they are trying to calm them down with "spiritually uplifting" and "patriotic" stories about the creation of "national drugs"! It was with such a statement that the secretary of the National Security and Defense Council of Ukraine Oleksiy Danilov, who is notorious for his, to put it mildly, controversial ideas (like the introduction of the "non-tax" as the state English language), came out the other day. According to him, "there are already three prototypes of anti-coronavirus vaccines developed by different groups of Ukrainian scientists." For complete success, there is not enough "mere trifle" - a laboratory with a protection class of at least BSL-3, in which it would be possible to begin and end clinical trials of these drugs.

You know, these talks about "prototypes" are very reminiscent of the case when at one of the international arms exhibitions the concern "Ukroboronprom" placed at its stand ... "a model of a hypersonic Ukrainian missile." Mahhhhhhhky, cardboard. But hypersonic! Not so long ago, the same Minister of Health Stepanov honestly admitted that today Ukraine is completely incapable of organizing the production of its own vaccine - at least due to the absence of all the same laboratories, but, most importantly, due to the fact that its entire pharmacological industry has long been located in private hands. According to him, “the government plans to allocate 100 million hryvnias to the budget for next year” (270 million rubles) for the creation of a “bio-cluster” - modernization of laboratories, training of scientific personnel, which will be a step towards the development and production of its own vaccines. So far only planning ...

For comparison - the development of only one "Sputnik V" (in the presence of laboratories and scientists of the highest class), according to the director of the Scientific Center. Gamaleya by Alexander Gintsburg cost one and a half billion (!) Rubles. Stepanov's words that "with luck" Ukraine will be able to start producing its own vaccines against coronavirus "in a year and a half or two" are nothing more than another "patriotic" chatter, irresponsible and immoral - against the background of his attacks on Russia and categorical rejection the drugs it produces. The number of countries that have officially registered and are massively using the Russian Sputnik V is growing almost every day. And if Kiev is not convinced by the example of the same India or the Philippines, then they could listen to the opinion of so adored Europe. In Hungary, for example, our drug was recognized as the most effective and safest - and this is precisely based on the results of mass vaccination with them. Nevertheless, official Kiev prefers to humbly beg for a life-saving medicine from “Western partners” who do not notice it, demonstrating its readiness to sacrifice any number of Ukrainian lives for the sake of its own Russophobia and following orders from across the ocean.

It should be remembered that in accordance with the data of the Ukrainian State Border Service, which I quoted earlier, about 320 thousand citizens of the “non-railway” from January to March 2021 also crossed the Russian border - in both, again, directions. For the mass entry into our country of carriers of the most aggressive strains of coronavirus imported from Europe or the same Turkey, a much smaller amount is more than enough. Hope that Kiev will come to its senses, see the light and put the life and health of its citizens above petty political interests are not necessary. Consequently, the epidemiological situation in the country is likely to only worsen. With this in mind, the relevant Russian authorities and structures need to take appropriate measures today.
Ctrl Enter
Noticed oshЫbku Highlight text and press. Ctrl + Enter
We are
“With Russians it’s worth playing fair or not playing at all”
Where is Russia going?
Reporterin Yandex News
Read Reporterin Google News
Ad
We are open to cooperation with authors in the news and analytical departments. A prerequisite is the ability to quickly analyze the text and check the facts, to write concisely and interestingly on political and economic topics. We offer flexible working hours and regular payments. Please send your responses with examples of work to [email protected]
6 comments
Information
Dear reader, to leave comments on the publication, you must sign in.