Will Poland be able to take away the Yamal-Europe gas pipeline from Russia? 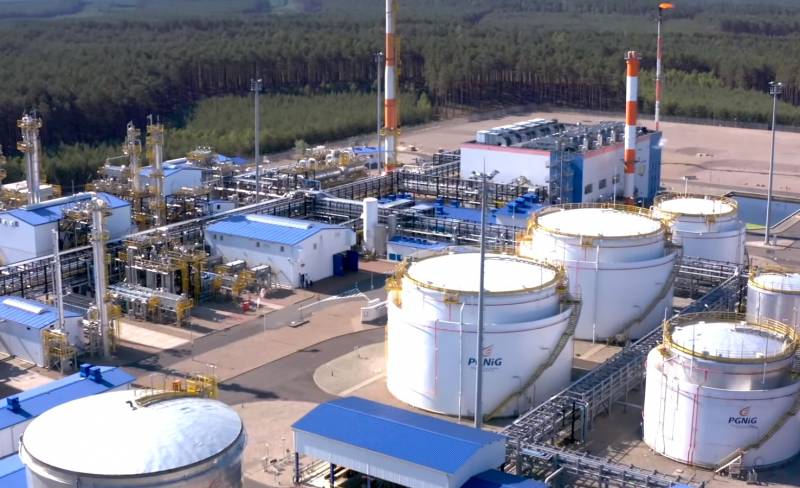 The Polish state-owned company Gaz-System has published a plan for the development of the energy system until 2031. It follows from it that this Eastern European country intends to slightly "move" neighboring Germany as a regional gas hub, and also to do all this at the expense of Russia, in the literal and figurative sense of the word. What are they up to in Warsaw, and why should the Gazprom leadership strain?


Today it is Gazprom that is the main supplier of “blue fuel” to Poland, where its share reaches 68% in the balance sheet. Gas goes through the Yamal-Europe trunk pipeline through points in Ukraine and Belarus and then in transit to Germany, where the final point is located. However, soon everything should change in the most dramatic way, since Warsaw intends to get rid of dependence on Moscow and turn its country into a regional "gas empire". To do this, she needs to take several steps.

First, the Polish leadership gave the go-ahead to start the construction of the Baltic Pipeline, through which up to 2022 billion cubic meters annually should come from Norway starting from 10. Then, from 5 to 7,5 billion cubic meters of gas per year, the capacity of the LNG terminal in Swinoujscie should be expanded. In addition, a floating terminal in Gdansk with a capacity of 4,5 billion cubic meters per year will be launched. Poland is betting on the purchase and subsequent resale of American liquefied natural gas. To enter the Baltic gas market, the GIPL pipeline is being built to Lithuania.

Taken together, these volumes will be sufficient to completely replace the "blue fuel" from Gazprom. Thus, last year the state-owned company PGNiG purchased 9,66 billion cubic meters from Russia. However, these are far from all the expected losses of our "national heritage" in Poland. The prospect of losing the Polish section of the Yamal-Europe trunk pipeline loomed quite realistically before him.

This gas pipeline with a capacity of 33 billion cubic meters passes through Poland further to Germany from east to west. But in the bowels of the Gaz-System company, its own "cunning plan" has matured, how to get this pipe for your needs. Since gas imports are now being reoriented to the northern direction, Warsaw is thinking about connecting this gas pipeline with LNG terminals in Swinoujscie and Gdansk and with the Baltic Pipe. To do this, you just need to build additional entry-exit points and a compressor station. An ingenious management solution: simple and elegant. But there are a couple of important nuances.

First, what about economic interests of Germany, which receives Russian gas in transit through Poland? To this end, the strategists from Gaz-System propose to implement a scheme with the so-called "virtual reverse": Poland will continue to take Russian gas destined for Germany for its needs, and the Germans will provide regasified LNG and Norwegian gas at the same price.

Secondly, it is not entirely clear what the Poles thought about the interests of Gazprom, which owns 48% of shares in EuRoPol GAZ, which owns the gas pipeline. The rest of the shares are owned by the state-owned company PGNiG and its subsidiaries. Will the leadership of the Russian monopolist be delighted with the Napoleonic plans of Warsaw, which refuses to buy from it, and wants to take over the gas transportation infrastructure? In fact, this is the most sensitive and interesting question.

What are the options for how Poland could finally "spin off" from Russia?

Ransom is the most civilized and European, in the best sense of the word, divorce scenario. But the problem is that the acquisition of 48% of the shares will be quite expensive, and the strategic plans of Gaz-System indicate that the Poles would prefer to save money. Otherwise, Warsaw could simply invest in the construction of gas transportation infrastructure from scratch.

Offset is also quite legal and, perhaps, the most realistic option. Recall that there are already precedents when Poland won huge sums in European courts and received them from Gazprom. Last year, the Polish Office for the Protection of Competition and Consumers (UOKiK) fined the Russian state corporation $ 57 million. Warsaw may well offer Moscow to give up shares in EuRoPol GAZ in exchange for writing off the debt. If so, we should expect new legal claims against Gazprom.

Nationalization is the crudest scenario, involving a sharp deterioration in relations between Poland and Russia. It should be noted that a step in this direction has already been taken when it came to the inclusion of Poland in the list of "unfriendly countries". Theoretically, Warsaw can go to the compulsory seizure of property belonging to the Russian state corporation in the event of a high-profile political scandal. Let's say that the “GRU agents Petrov and Boshirov” will again be accused of some kind of sabotage against the Republic of Poland. Further, according to the worked out scheme: the hysteria of the Polish Foreign Ministry, the expulsion of Russian diplomats, the rupture of gas relations with Moscow through the nationalization of its assets, etc.
What scenario would you stake on?
Ctrl Enter
Noticed oshЫbku Highlight text and press. Ctrl + Enter
We are
Peace enforcement operation. Russia inflicts a preemptive strike on Kiev
Three years left: Ukraine will be sold in parts
Reporterin Yandex News
Read Reporterin Google News
12 comments
Information
Dear reader, to leave comments on the publication, you must sign in.