How the US forced Turkey to choose between Russia and China 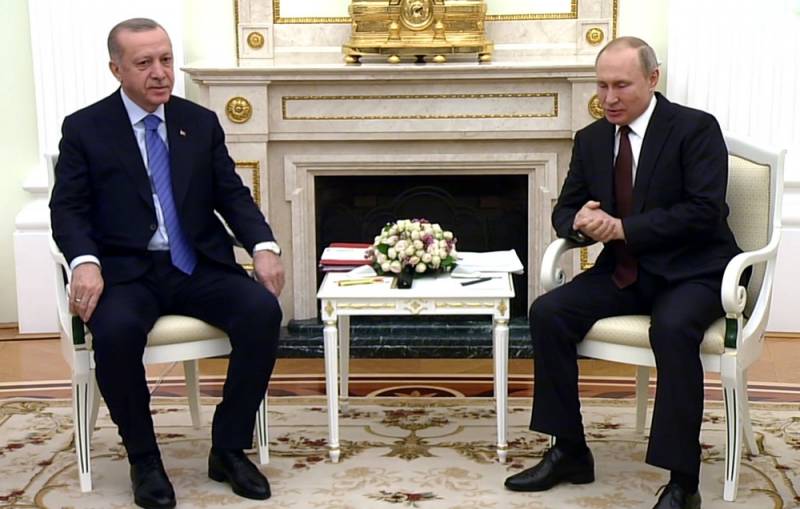 The recent decision of Washington to recognize the Armenian genocide in the Ottoman Empire caused a large publicpolitical resonance in Turkey and Armenia. President Joe Biden expressed his mercy to Yerevan, "muzzled" in Nagorno-Karabakh, Azerbaijan, and at the same time sent a "black mark" to his colleague Recep Erdogan. In fact, the "Sultan" was faced with a choice: either he keeps up with the United States, forgetting about neo-Ottoman ambitions, or his own way, but against the Americans. And I must say that in Turkey, "Sleepy Joe" was heard.


The well-known Turkish political scientist Erdar Salam said on the pages of the respected Cumhuriyet that friendship with the collective West is preferable for Ankara. However, if the choice is made in favor of the East, then Turkey will have to choose again between Beijing and Moscow:

The wonderful honeymoon period with Russia is over, you have to make a choice: China or Russia.
Let's try to understand all this in a little more detail. Before President Erdogan came to power, Turkey was a pronounced secular state of the pro-Western wing. It is a member of the North Atlantic Alliance, being the second most powerful member of this military bloc after the United States, and since 1999 has been a candidate for membership in the European Union. True, tired of standing on the doorstep of the European Union, in 2015, "Sultan" Recep First said that Ankara was no longer interested in this, and began the process of gradual Islamization. Nevertheless, thanks to the concluded Customs Union with Brussels, the EU is still Turkey's main trading partner. In 2020, trade between them reached $ 143 billion.

For comparison, the trade turnover between Ankara and Beijing amounted to $ 126 billion, but this is in 5 years. At the same time, Turkish exports to China amounted to $ 13,18 billion over this period of time, and imports from China - $ 112,9 billion. The indicators of mutual trade between Russia and Turkey are more modest: in 2019, this figure was $ 21,7 billion, of which our exports of raw materials and products of its processing accounted for $ 17,75 billion, Turkish imports in the form of engineering products, equipment, food , textiles and footwear - $ 3,46 billion.

In general, it turns out that the volume and scale of economic cooperation with the collective West in Turkey is much higher than with China and Russia. Add to this the dependence on technological chains from American and European corporations, educational and cultural ties. The Turkish diaspora is the largest in Germany, and the Turkish elites are closely integrated into Western life. Despite the fact that it was never accepted into the European Union, Ankara objectively cannot find an adequate alternative in the form of the Eurasian Economic Union or cooperation with China today. For this reason, it is not surprising that Erdar Salam says that cooperation with the West is preferable if he still has to make a choice.

However, things have become even more complicated now. We must pay tribute to President Erdogan for trying to get the most out of Donald Trump's 4-year rule, when the United States pursued a pronounced policy of isolationism. Under him, Turkey began to raise its head, spinning its own integration pan-Turkist project as a kind of alternative to the European Union and the EAEU. Ankara is trying to unite the countries of Central Asia into a "logistics superpower" around the Middle Corridor of the "New Silk Road" from China to Europe. The potential of such an economic community is quite large: let us remember that once Russia also gathered around the trade route "from the Varangians to the Greeks." Naturally, Turkey should take the leading role in this potential interstate union of the Turkic-speaking states and the status of "Beijing's window on the Mediterranean". The need to defend common economic interests can be assigned to the united army of Great Turan, the possibility of which has been discussed for a long time. Thus, in the future, something like a "Central Asian NATO" is emerging, where Turkey will play the first violin, which has the largest and most powerful army, the second largest after the American one.

And everything would be fine, but the problem is that these ambitions of Ankara can be realized only at the expense of Russia's national interests. To implement the "logistic superpower" project, President Erdogan most actively helped Azerbaijan in the war against Nagorno-Karabakh, receiving in return a land corridor through Armenian territory to his closest ally and access to the Caspian Sea. Now it was the turn of the other former Soviet republics of Central Asia - Kazakhstan, Kyrgyzstan and Uzbekistan - to pull over to their side.

This can be done in different ways, for example, by joining the conflict on the side opposite to Russia. Say, take the side of Nur-Sultan, if something bad on interethnic grounds happens in Northern Kazakhstan. Or mediate in the settlement of yesterday's "one-day war" over water between Kyrgyzstan and Tajikistan. Recall that Dushanbe and Bishkek refused Moscow's help in the negotiations a year ago. And then President Erdogan will come “all in white” and reconcile everyone. Or, on the contrary, it will add fuel to the fire and play off our CSTO allies stronger, forcing the Kremlin to choose between them, and then help the other side.

What can Ankara lose from the end of the honeymoon with Moscow? Half-empty "Turkish Stream"? But it has TANAP and LNG terminals. Akkuyu NPP, which Rosatom is building in Turkey at its own expense? Yes, the loss will not be so great when compared with the possible losses from a break with the collective West or the collapse of its own pan-Turkic project of a "logistic superpower" that controls trade between Asia and Europe. As a matter of fact, Turkish political scientist Erdar Salam spoke about this in plain text, speaking about the need to choose between Beijing and Moscow. So far, things are not going in our favor.
Ctrl Enter
Noticed oshЫbku Highlight text and press. Ctrl + Enter
We are
"We must beat first": the geopolitical alignment around Russia is continuously deteriorating
Ten "defeats" of Putin
Reporterin Yandex News
Read Reporterin Google News
6 comments
Information
Dear reader, to leave comments on the publication, you must sign in.