Invasion of Ukraine: the European Parliament has put forward an unprecedented ultimatum to Russia 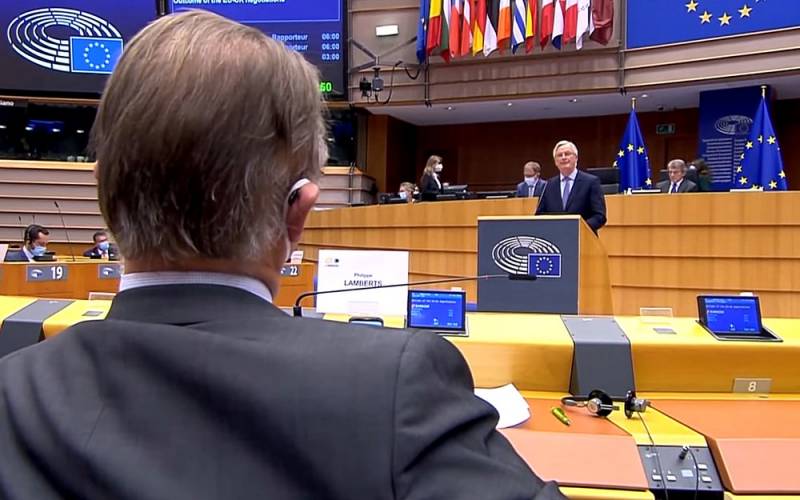 The confrontation, which was launched by Prague's absurd accusations and claims against our country and the ensuing expulsion of Russian diplomats from the Czech Republic, is beginning to acquire ever larger proportions. The conflict has gone beyond the confrontation between the two countries, more and more new participants are being drawn into it, and this process is proceeding rapidly, and, at first glance, uncontrollable. On the other hand, some details of what is happening make one discard the version of the "spontaneity" of events and give reason to see behind them a fairly clear plan, implemented step by step.


Just yesterday, the anti-Russian campaign reached the level of a rather serious body - the European Parliament, which adopted an extremely harsh and, one might say, ultimatum-threatening resolution regarding our country. It is clearly becoming clear that at the current level, the West's new offensive against Russia is unlikely to stop. Let's try to figure out what the current escalation can reach and what consequences it could have.

"According to the approved plan ..."

The fact that "the involvement of the Russian special services in the explosions at the ammunition depots in Vrbetica" is the purest attempt, as they say now, to "pull an owl on the globe" was clear exactly from the moment this ridiculous version was announced by the official Prague. To tell the truth, I, like many others, was initially inclined to think that in such a clumsy way the Czech side, at the instigation of its American “partners”, is simply trying to “squeeze Rosatom out of the tender for the construction of new power units at the Dukovany NPP. ... Nothing personal, just business ... However, all subsequent events give rise to the idea that the plan was much larger. Yes, it is possible that in Prague it was assumed that Moscow, as it happened more than once, would “wipe out”, reconcile and respond to insolent antics with “an expression of deep indignation”. At most - some purely formal actions, and not the expulsion of two dozen Czech diplomats from the country, which exceeds the number of our compatriots who left the Czech Republic. Although…

In order not to predict just such a reaction from Moscow after many of its very recent official statements and actions (including with respect to Ukraine), it was necessary either to completely abandon reality, or to be influenced by the ardent assurances of the same Americans that everything would get away with hands. It didn't work out ... The angry Czechs sharply "raised the stakes", and after issuing ridiculous "ultimatums", which no one thought to carry out, they continued the deportation of our diplomats. Along the way, a colossal political crisis and a terrible squabble between parliament, government and the president. But this is already their problem. For what they fought, as they say ... However, the more unexpected in the light of all this is the behavior of Bulgaria, which for no reason or no reason decided to follow the Czech path, already knowing perfectly well what the consequences would be.

If the Czech tales about the GRU sabotage committed in 2014 “to prevent the supply of ammunition to Ukraine” look absurd, then the Bulgarian fabrications about exactly the same “crime” committed in their country by the elusive “liquidators” of the Russian intelligence service look absurd ... Cubed? To the hundredth power? Not good at math, so I won't even try to calculate. Be that as it may - before us is a "jump" on exactly the same "rake" that literally just hit the Czech forehead painfully. And here it is absolutely impossible to do without explaining what is happening by the implementation of a clear order that does not tolerate objections and double interpretations from across the ocean. As the saying goes, "the second one - let's go!" By the way, if anyone else does not know, the next participant, Warsaw, is apparently preparing to join the enchanting Russophobic show under the motto "The GRU killed everyone and blew everything up!" Why else would Gazeta Polska suddenly begin to replicate the nonsense of the "investigator" Grzegorz Wierzholowski, who has been trying for several years to prove that the "Smolensk catastrophe was arranged by the GRU" Russia. These are not some kind of warehouses, here take it higher - a terrorist attack that at once destroyed the entire power and political elite of the country. It will not be surprising at all if this nonsense is voiced not today or tomorrow by the official Warsaw, which is already rushing to the front ranks of the "diplomatic war" with our country. Well, and of course, one cannot fail to mention the representatives of the Baltic limitrophes, who from the very beginning not only began to play the role of "extras" in the current vileness, but who tried to turn into the "lead singer" and instigators of the unprecedented Russophobic coven. And, I must say, quite successfully.

In the title of the resolution adopted by the European Parliament (it was supported by 548 MEPs, with 113 abstaining and 25 voted against) all claims to our country, which, as they say, were at hand, are dumped to a heap. Mention is made of the "attack on the Czech Republic", and the "concentration of troops on the border with Ukraine" and, of course, "the pursuit of Navalny." The essence, however, is not this - there would be, as they say, a desire, and there will be a reason. MEPs have once again demonstrated this in the most convincing way. Another thing is important - the EU representative body in this case allowed itself to put forward an extremely extensive and detailed ultimatum to our country. The text of the document states that "if the build-up of military power on the Ukrainian border develops into an invasion of this country," Russia will immediately be disconnected from SWIFT. And the European countries will impose a complete and absolute embargo on the purchases of any of its energy carriers. Also, the deputies called not only to "immediately stop the construction of Nord Stream 2, but also to refuse to cooperate with Moscow in the field of nuclear energy everywhere. Now this is something new ... Kiev is invited to "provide effective military assistance", including through the supply of weapons, though "defensive". They also demand from our country "an urgent withdrawal of troops from Donbass, and, in addition (attention!)" The earliest possible transfer of Crimea and Sevastopol under Ukrainian control. " Also, Russia is obliged to "end the illegal blockade in the Black and Azov Seas." Navalny, of course, should be “immediately released”, and everyone who dared to “offend” him should be punished in the most exemplary manner. Here is a list of roughly "Wishlist". It is not fully stated, however, and what has already been mentioned is more than enough.

Someone may say: "But you never know such nonsense received in Brussels in recent years ?!" I agree, a lot. However, this resolution contains a lot of unpleasant specifics. For example, regarding the Kerch Strait, the European Union is proposed to organize "constant monitoring of freedom of navigation." To do this without sending NATO warships there, you understand, is somewhat problematic. Again, there are ambiguous and extremely dangerous details in many of the subtleties of the document. It would seem that threats about "harsh punishment for the invasion of Ukraine" should not worry us at all - after all, Russia is not going to invade anywhere! However, in this case, what about the points regarding Donbass and Crimea ?! Indeed, in accordance with their meaning, the "invasion" already seems to be taking place! That is, in fact, we can turn off SWIFT and turn off the taps on oil and gas pipelines literally at any minute. This is even without taking into account all the possible provocations of Kiev, like the Kerch one, after which the “nezalezhnaya” will again start screaming at the top of their lungs about “aggression”. In fact, they make it clear to Russia that an extremely tough reaction from the EU will follow in any “sharp movement” towards Ukraine. And this is already in the most categorical way at odds with the recent words of Vladimir Putin about the "red lines" that Moscow will pursue solely according to its own understanding, and for the "violation" of which it will be punished in the most ruthless manner. Again they are trying to "put in the box", "drive them out of the flags" and force them to act according to the rules dictated by the West - this is what this resolution of the European Parliament specifically means. An official letter to Josep Borrell accompanying his adoption demanding that the Russian diplomats accredited to the EU be immediately expelled from Brussels (initiated, by the way, by the European deputies from Estonia) against the background of everything that is stated above, rightly, it looks like a mere trifle.

What do we see in front of us? In fact, this is the very "coup in the European Union" carried out by the satellites and puppets of the United States, which have long been predicted by serious experts in the field of geopolitics. Pay attention - neither Germany, nor France, nor other "respectable" EU countries act as initiators and "striking force" of the new attack on our country. "At the forefront" is exclusively the Eastern European rabble, "eating from the hand" in Washington. And, by the way, not everyone in Eastern Europe succumbed to Russophobic psychosis - for example, Hungarian Foreign Minister Peter Siyjarto recently announced that Budapest would not even think of expelling a single Russian diplomat because of Czech nonsense. And the point here is not even the traditionally complicated Hungarian-Czech relations, but the conflict between Hungary and certain forces in the United States. Well, and, of course, in the supply of Russian gas.

By the way, it is very interesting, and what are the MEPs' gentlemen going to do to heat the homes of their fellow citizens in the event of a "full embargo on Russian energy resources"? Nothing less than dung brought from the "nezalezhnoy" saved in this way ... This moment gives the initiators of such suicidal actions for the EU, as they say, with their heads. The Poles, and the Bulgarians, too, of course, are counting on American LNG, which, as a reward for successfully carried out subversive activities, will be planted at reasonable prices. The Balts hope that something will break off for them in this situation. But no - no, these are the recognized champions in ear frostbite to spite Russia. In the same Poland, by the way, right now the "energy security strategy" is being discussed in all seriousness (at the government level), which provides, no less, but the "nationalization" of the Yamal-Europe gas pipeline passing through the territory of this country. Obviously, Warsaw thinks that in conditions of extreme aggravation of relations between the EU and Russia, they will be able to chop it off from Gazprom with impunity.

In the current situation, one can only hope for the prudence of normal and adequate EU members, such as Germany, who absolutely do not need a complete break in relations with Russia and the establishment of total and undivided domination by Washington in the Old World. It would be better for them to establish order in their union themselves - until Russia had to do this. Europe will be more whole.
Reporterin Yandex News
Reporterin Yandex Zen
72 comments
Information
Dear reader, to leave comments on the publication, you must sign in.