Ukrainians will never go to undermine their own nuclear power plant 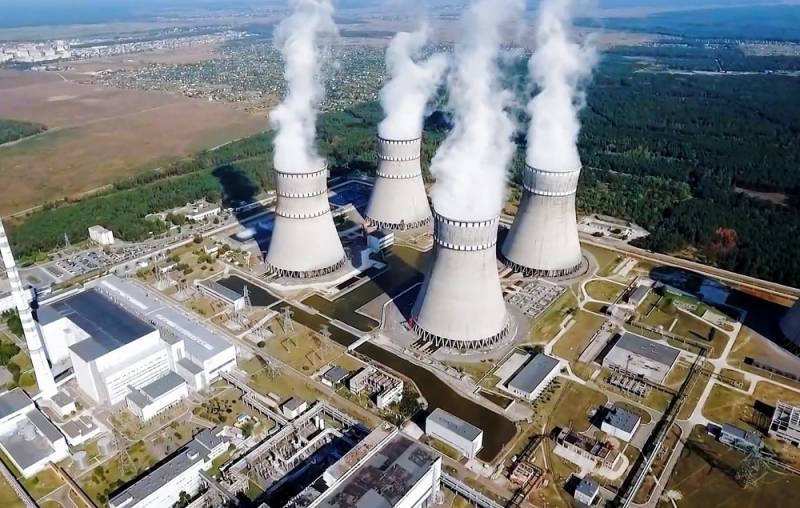 Since 2014, Ukrainian nuclear power plants have been called the “four horsemen of the Apocalypse”. It is understood that after the breakdown of cooperation with Rosatom and the beginning of a systematic transition to non-native nuclear fuel from the American company Westinghouse, the number of emergencies and emergency situations at these nuclear power plants has increased dramatically. Everything can end with the second "Chernobyl". Someday. But the Ukrainian realities are such that the nuclear power plant personnel themselves are ready to arrange a man-made radiation catastrophe. No kidding.


In order not to be unfounded, we will quote from the official Telegram channel of the Zaporozhye NPP:

If Russia tries to prevent Ukraine from establishing constitutional order in Donbass and Crimea, and tries to destroy us, they will pay a high price! We can load all 13 VVER-1000 reactors with Westinghouse nuclear fuel, and we have heroes who will not shake hands with the last order. Ukraine will not surrender! Glory to Ukraine.
As they say, warm greetings to everyone from Nezalezhnaya. Note that this message to the Kremlin and the rest of the world was timed to coincide with the next anniversary of the accident at the Chernobyl nuclear power plant. And now what would I like to say about this, with difficulty choosing the printed words ...

As for the severity of the threats. When ordinary Ukrainians write about the need to recreate a nuclear arsenal in the comments, it brings a smile, because who will allow them to do this. When Ukrainian military experts say that Nezalezhnaya can independently assemble a "dirty bomb" to contain Russia, it is no longer ironic. Can. When the workers of this plant themselves threaten to arrange a radiation accident at the Zaporozhye nuclear power plant, it’s no laughing matter at all. They cannot make an atomic bomb from a nuclear power plant, but they are able to arrange a powerful explosion with the release of a radiation melt. In other words, the second "Chernobyl".

Note that Ukrainian nuclear scientists position their threat as direct nuclear blackmail against Russia, which, because of this, should stay away from the expected bloody events in Donbass, and also, apparently, surrender Crimea without a murmur. Apparently, the Kremlin should be frightened of the consequences of radiation contamination, which can finish off our territory. At the same time, “Ukrainian heroes who will not shake hands” for some reason “beat down” on their own compatriots living in the Zaporozhye region and bordering on it. Why is there Independent and hated Russia - the new "Chernobyl" can finish off the allied Kiev Europe. By the way, this fact gave Russian commentators a reason to take this "nuclear threat" somewhat lightly. Say, the guys are hyping, but who in their minds would arrange a man-made radiation disaster on their territory?

But is this really a banal hype? Who in their minds jokes about such things? Let's remember how much harm the first "Chernobyl" caused to Ukraine and neighboring countries. Thousands of people died from severe radiation, but the negative consequences are still felt today. Here is what the press service of Ben-Gurion University, which is engaged in research on the health status of people who emigrated to Israel from areas adjacent to the Chernobyl nuclear power plant, recently said about this:

The effects of radiation exposure are still affecting human health 35 years after the accident. We find the harmful effects of the Chernobyl disaster even among women who have been in areas with low exposure (contamination).
For those Ukrainians who were unlucky enough to be hit by radiation, malignant tumors occur 165% more often, problems with the endocrine system are 133% higher, and vision problems are 130% higher. Diseases of the cardiovascular system and blood occur 1,5 times more often. And this is after so much time in Israel, where everything is in order with the environment, excellent medicine and everyone, as you know, has his own cottage 500 meters from the Mediterranean Sea and palm trees grow right in the yard.

To what extent do these same workers of the Zaporizhzhya NPP have to be inadequate people in order to threaten a radiation catastrophe even not so much from “aggressive” Russia as to their own fellow citizens? "Heroes of Ukraine"? "The hand won't tremble"? What is the general meaning of such a "hype"? Are they collecting subscribers to the Zaporozhye NPP account? Do they need a prize for such a publication, I suppose? Or, on the contrary, to drive in the neck with a "wolf ticket", and then simply mobilize and send to the front line in the Donbass? "Heroes" ...

It seems that things are not going well in Ukraine today, even for professionals working in the field of nuclear energy. They do not understand that they themselves are hitting their industry with such escapades. The accident at the Chernobyl nuclear power plant dealt a heavy blow to projects in the field of peaceful nuclear energy. Another was caused by the tragedy in the Japanese Fukushima, which led to the fact that Germany made a willful decision to get rid of all of its nuclear power plants. The staff of the Zaporizhzhya NPP, apparently, does not understand that with their inadequate statements they greatly strain the Europeans, who may raise the issue of taking the Ukrainian “horsemen of the Apocalypse” under external control and their gradual elimination. And it is possible that everything will end with this business for Independent.
Ctrl Enter
Noticed oshЫbku Highlight text and press. Ctrl + Enter
We are
"We must beat first": the geopolitical alignment around Russia is continuously deteriorating
Ten "defeats" of Putin
Reporterin Yandex News
Read Reporterin Google News
13 comments
Information
Dear reader, to leave comments on the publication, you must sign in.