US forces Russia to abandon ISS in favor of its project

July 18 2018
5
For the first time since the Mir orbital station was safely drowned in 2001, Russia is at a crossroads. Before the Russian space there are three classic options for the path of further development. 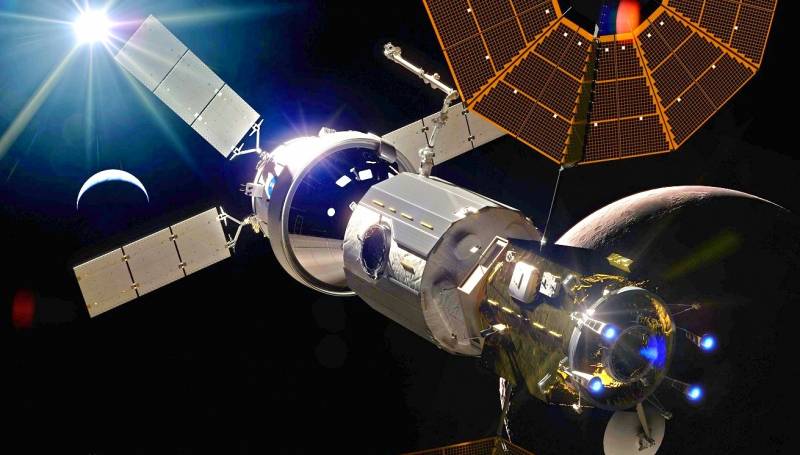 In 1998, with the most active participation of the Russian Federation, the International Space Station was created, our first module was our Zarya. As you know, the Russian segment on the ISS is the second largest after the US national segment. The orbital station can function quietly for many years to come, but the States have stated that they can exit this project.

The Americans began to create a more promising near-moon orbital visited station called Lunar Orbital Platform - Gateway. It is assumed that the station will be used to study the moon, for which the United States has far-reaching plans, and will also be a transshipment base for travel to Mars and deep space. Formally, the project is international in nature, however, everyone understands that in fact it is American. China is not allowed to it, Russia's participation is reduced to third roles. It was reported that developers require Russian manufacturers to switch to using NASA standards to participate in this project.

Our country has to choose from three development options.

First - to leave the Lunar Orbital Platform - Gateway and focus on ensuring the autonomy of the ISS Russian segment, for this it is necessary to add three additional modules to it.

Second - throw the ISS and surrender to the mercy of the Americans. A certain source in Roscosmos voiced similar ideas:

Due to the fact that the ISS is scheduled to be completed in 2024, and the Russian segment has not yet been completed, suggestions are being made to complete its creation in the current configuration, and the ordered modules should be used to expand Russian participation in the Lunar Orbital Platform - Gateway project

Third Embodiment - The creation of an orbital station in conjunction with China, to which Beijing has already shown interest.

There is still a reasonable option - to send all the “partners” to the forest, undock the Russian segment from the ISS and develop it into an independent national orbital station by adding new modules. But Roscosmos’s hardly sequestered budget will pull it, and not the fact that a repetition of the fate of Mir will not expect such a station. The officially declared reason for its flooding was the high cost of its maintenance, supposedly, the country could not afford to allocate from 70 to 200 million dollars a year for these purposes.
Ctrl Enter
Noticed oshЫbku Highlight text and press. Ctrl + Enter
We are
Why is the moon still not owned by the Americans?
The US is trying to bend Russia under itself in a grand project
Reporterin Yandex News
Read Reporterin Google News
Ad
We are open to cooperation with authors in the news and analytical departments. A prerequisite is the ability to quickly analyze the text and check the facts, to write concisely and interestingly on political and economic topics. We offer flexible working hours and regular payments. Please send your responses with examples of work to [email protected]
5 comments
Information
Dear reader, to leave comments on the publication, you must sign in.