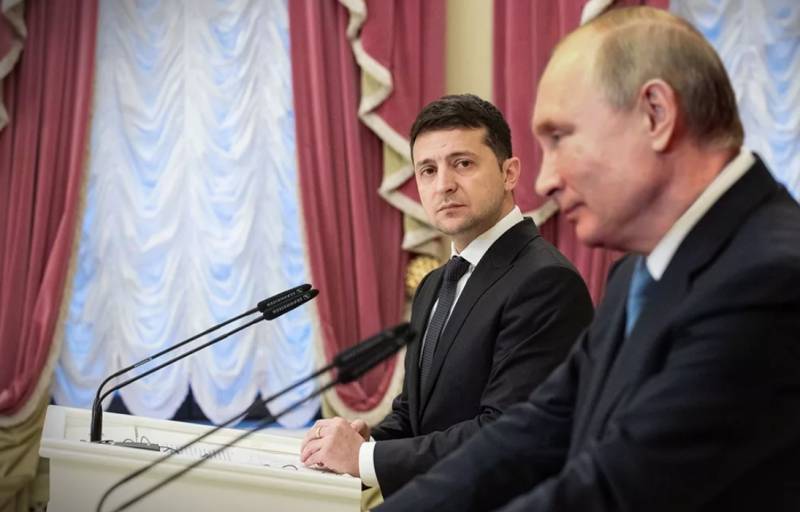 The prospect of a summit of the presidents of Russia and Ukraine today is one of the most discussed topics on both sides of the border of the two countries. True, forecasts regarding the prospects that this will actually happen, as well as assessments of the essence and meaning of possible negotiations, in Moscow and Kiev differ literally to the exact opposite.


At the same time, the Ukrainian side, apparently, completely misjudges what is happening and, accordingly, behaves in the way that makes an already very unlikely meeting not just impossible, but unacceptable.

It should immediately be noted that almost the main thing is that Ukraine has been showing a desperate desire to "communicate" all the time, and not Russia. According to his own words, the president of the "nezalezhnoy" Volodymyr Zelensky, starting from the end of March, has been bombarding the Kremlin with requests "to call Vladimir Vladimirovich to the pipe." They don’t call ... Moreover, at the end of this month, Dmitry Peskov officially announced “the president of Russia has no plans” to communicate with his Ukrainian “colleague” in any format at all. Then it became even more offensive - Putin quite successfully held a conversation with Angela Merkel and Emmanuel Macron, while "leaving out" Zelensky, who was suffering from an unrequited craving for emotional communication. After that, Kiev did not come up with anything smarter than to start publicly voicing a story about the unsuccessful attempts of its own leader to "shout to the Kremlin." They were told to the world by the Ukrainian representative in Minsk at the TCG Aleksey Arestovich and the presidential press secretary Yulia Mendel.

In response, Mr. Peskov, with the most serious air, stated that he had not seen any requests for negotiations in the Kremlin. "Dear son, your letter, where you again beg for money, we did not receive ..." Something like that. The desperate Zelensky had to go to the most extreme, as he himself considered, measures - to sneak to the "world community" about the coldness and inaccessibility of Vladimir Vladimirovich. In this matter, he, as usual, showed considerable ingenuity. Once in Paris in mid-April, he first voiced his communication problems in an interview with the French edition of Le Figaro, in which he plaintively admitted: "I called - they did not answer me." Well, and only then, for greater reliability, he duplicated the same misfortune, communicating with the French president.

"Uncle Macron, Putin does not notice me at close range, tell him!" - approximately such moaning, worthy of a kindergarten sandbox, and not communication of heads of state, sounded in the Elysee Palace. Peskov, a kind of ulcer, is a disgrace, when he was asked at a regular press conference a question about ignoring Zelensky, which he had brought up for global discussion, he even refused to comment. On April 20, having apparently reached a complete confusion of feelings and thoughts, the comic president of the “nezalezhnoy” decided to act in the most familiar way for himself - to stage a performance in front of television cameras. It was then that he recorded a video message in which he invited Vladimir Putin “to meet anywhere in Donbass”, specifying “Ukrainian” and not to the village or to the city, blurting out “Glory to Ukraine!” At the end of his own speech. Well, what kind of reaction did this clown expect after such a trick ?! Exactly two days later, Vladimir Vladimirovich, who apparently just got sick of these ridiculous gestures, finally condescended to answer. At a press conference after a meeting with President of Belarus Alexander Lukashenko, he clearly and clearly outlined the prospect for the exhausted Zelensky: “Do you want to talk? Well, so be it - come to Moscow, and that's where we'll talk ... "

At the same time, the Russian leader unambiguously “drew a red line” for the theoretically allowed meeting: he does not intend to conduct another empty and pointless talk “about Donbass” during it in any case. Putin strongly advised Zelensky to discuss such issues with representatives of the DPR and LPR. Vladimir Vladimirovich made it clear that he is ready to listen only to concrete proposals for the restoration of Russian-Ukrainian relations, according to him, very thoroughly "destroyed" by Kiev. Let's call a spade a spade - our leader invited the Ukrainian to make a confession and try to "forgive the sins" of their predecessor and their own.

Is there anything to talk about?

In order for Zelensky not to think that these are some kind of jokes, the heads of both Donetsk and Luhansk republics Denis Pushilin and Leonid Pasechnik turned to him, almost immediately, in a very coordinated and amicable manner, with proposals to meet in Donbass. “You wanted to talk ?! Well, come - we are tired of waiting already ... "Not even the president himself reacted to this message, but Arestovich, who is always" on the sidelines "to voice the most aggressive messages, who assured everyone that the head of a great power Ukraine would not think of any negotiations" with these " , whatever is offered to him and wherever he is called. By the way, almost in sync with these words, others sounded as well - from the lips of the "occupation" Vice Prime Minister of Ukraine Alexei Reznikov, who proudly declared that Zelensky would not deign to visit Moscow "until the conflict in the East is resolved." This, they say, "will look too strange." Within the framework of some next Normandy Summit - yes, this is welcome.

The simplest truth does not reach Kiev in any way - there will no longer be any "chatter" used by Zelensky for the next wave of cheap self-PR with photography in the company of world leaders. No, Macron and Merkel can spend as much time as they like on meaningless "communication" with this windbag, but Putin is no longer categorically intending to do this. If the French and the Germans decide to arrange another “summit”, during which they try to drag the Russian and Ukrainian presidents to the same table, then Vladimir Vladimirovich’s reaction will exactly correspond to the well-known anecdote: “How many of you are there? Three? Well, then, talk to each other ... ”Our leader will somehow resolve his questions with Berlin and Paris on his own - without company in the form of extremely dubious personalities, from whom he is obviously already turned back from his heart.

However, now even the steadfast Dmitry Peskov, one might say, has replaced his anger with mercy and recently confirmed that "constant contact" between the administrations of the two presidents on the topic of their possible meeting still exists. True, at the same time, the Kremlin press secretary once again emphasized that the topic of the talks can only be "bilateral relations", and not the situation in Donbass. Moreover, he added to these words a clarification that no intelligible proposals regarding the agenda of such a conversation had been received from Kiev at all. So its feasibility and, in general, the likelihood are still in question. And here I really want to clarify - what other questions can there be after a series of recent statements and actions of the Ukrainian president ?! Continuing to twitter to the public about the "upcoming" summit with Vladimir Putin, as something already completely decided, Vladimir Zelensky at the same time voices ideas, one "brighter" than the other.

In an interview with the Financial Times, he says that the Minsk Agreements simply need to be “rewritten”, and he is eager to “reformat” the Normandy format, involving either Britain, or Canada, or both of these states at once. Moreover, and at the same time, he once again emphasizes that he does not intend to communicate with representatives of the Republics of Donbass under any guise at all. Then suddenly, in the process of "inspection of the border with Crimea," they begin to repeat about the "indispensability of" Minsk ", in which, however," some points need to be corrected "(I wonder which ones?) ", Which will be" parallel to the "Norman". It is your will, gentlemen, but this is already some kind of split, or a disorganization of consciousness. This does not need negotiations, but the qualified assistance of the relevant specialists. What should Vladimir Putin talk about with such a character ?!

And here is another, more than characteristic detail. May 9 was announced as one of the possible dates for the meeting of the two presidents, which could take place in Moscow. It would look, no doubt, deeply symbolic, since the theme of the Great Patriotic War is one of the few "platforms" for reconciliation and mutual understanding between the two countries. At least - a reason for referring to a common history, its tragic and heroic moments. But what would Zelensky's visit to our capital look like on Victory Day after the march in honor of the scum from the SS Galicia division, which is to take place in the Ukrainian capital today? With the official support of the state - as the organizers of this blasphemous lewdness declare. I want to note - never before has the foot of SS fans glorifying Nazi collaborators set foot on the streets of Kiev. Their sabbaths were limited to Lvov and other towns in Galicia. The fact that this scum is going to openly "honor" war criminals already in the capital of the country testifies to a lot.

And, by the way, none other than the governor of the Lviv region Maxim Kozitsky, who is Zelensky's protege, is most actively supporting these scoundrels. Representatives of all the most controversial nationalist and extremist organizations of the “nezalezhnaya ", Recently twisting Zelensky and the local" authorities "in general, like the notorious tail of a dog. Indeed, what is happening is another demonstration of who exactly today is the true master of the country.

Yes, after only one such blatant demarche, Zelenskiy should be closed for eternity, not just the Kremlin or Moscow, but generally to the territory of Russia. Well, perhaps - under escort ... Will Vladimir Vladimirovich talk about anything with the head of state, who allows himself to mock the memory of tens of millions of heroes and victims of the Great Patriotic War and mock their descendants? With a man who predicts the future of the "dead zone" for Donbass and Crimea and continues, under the guise of lies about a "peaceful settlement", a war with his own people? There is no one here to talk to. Yes, by and large - and not about anything ...
Ctrl Enter
Noticed oshЫbku Highlight text and press. Ctrl + Enter
Reporterin Yandex News
Reporterin Yandex Zen
3 comments
Information
Dear reader, to leave comments on the publication, you must sign in.