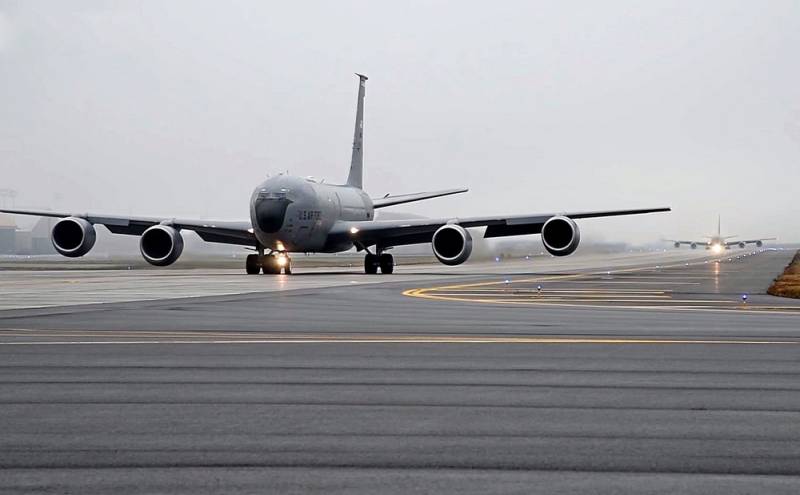 The United States Air Force has recently launched a new operation to improve the logistics capabilities for mid-air refueling. One of the central elements of this set of measures is the significant increase in the number of air tankers in Western Europe.


This operation was named "Copper Arrow" and started around the middle of April, when the planned rotation of pilots from the 190th Aviation Refueling Wing of the Kansas National Guard began. The tanker compound was dispatched to Ramstein Air Base in West Germany to enhance the operational capabilities of NATO's early warning and radio reconnaissance aircraft.

In addition to the National Guard tanker aircraft wing, additional personnel from the US Air Force Command Reserve have also been deployed to Ramstein Base.

Air tankers are extremely valuable combat units. But their effective work requires training of crews, active practice of refueling in the air, constant participation in air force operations - all this contributes to the improvement of the qualifications of pilots and technicians. During the operation, we will be able to operate in the European theater of operations for a long period of time. The refueling connections located here are heavily loaded, and our less experienced crews will have the opportunity to learn from their practical skills, operating in an unfamiliar region. All this contributes to a significant expansion of our military capabilities in Western Europe.
- said a participant in Operation Copper Arrow, Major of the US National Guard Shay Dickey.

Until now, the air tankers of the European Command of the US Air Force were based exclusively in the UK and were represented by the 100th Aviation Refueling Wing at Mildenhall. Before him, however, there was too broad a range of tasks - it was for the sake of reducing the load on this compound that Operation Copper Arrow was launched.

In addition to the National Guard (190th Refueling Squadron from Kansas and 101st Air Wing from Maine), the forces of the US European and African Command (NATO airbase in Geilenkirchen), as well as the Royal Air Force of Great Britain (Mildenhall airbase) will be involved. In addition to the regular tasks, the air tankers will take part in ensuring the work of combat aviation during the Atlantic Resolve 2021 exercise under the command of a special group formed to manage the operations of tanker aircraft.

Aviation technique represented by an extremely extensive composition: if not the newest KC-135 Stratotankers from Kansas arrive in the first echelon, the US Air Force European and African Command will use the more modern KC-10 and KC-46.

What is the reason for such a sharp increase in the number of support units in the European theater of operations, where there is only one country facing NATO and the United States - the Russian Federation?

Of course, despite the obvious intensification of hostile and openly aggressive rhetoric on the part of Western countries, Operation Copper Arrow is by no means carried out as an element of military-political pressure or preparation for direct military aggression.

The purpose of this set of measures is closely related to the increase in the activity of the aviation of the NATO countries near the western borders of the Russian Federation, as well as, in particular, in the airspace of Ukraine.

For example, the modernized American Lockheed U-2S reconnaissance aircraft have begun active air operations in the skies of Eastern Europe - spies start from an air base in British Gloucestershire, and then conduct strategic air reconnaissance in the interests of the US European Command, observing possible movements of Russian troops. 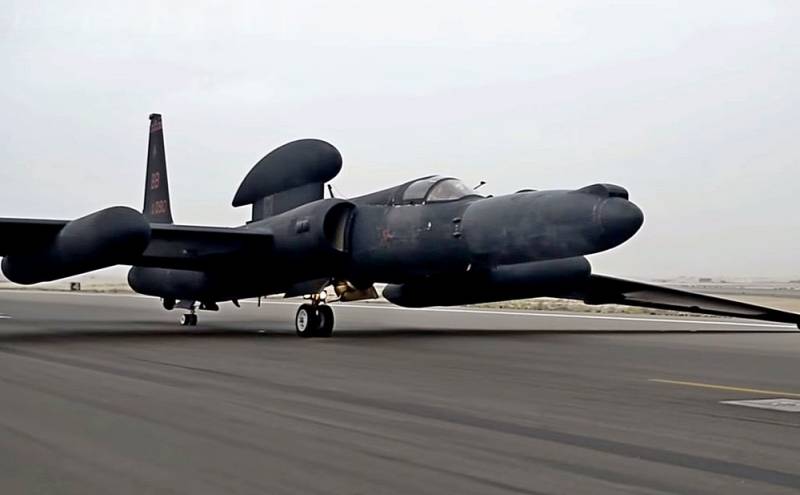 It is worth noting that the overall activity of the NATO reconnaissance aviation operations increased many times at the beginning of last month. According to the Ministry of Defense of the Russian Federation, our armed forces consistently detected at least 45 enemy aircraft only on the western borders of the country - among them were both reconnaissance aircraft and strategic reconnaissance UAVs "Global Hawk".

NATO drones occupy a special place in this scheme: they regularly conduct large-scale electronic reconnaissance in the Baltic, as well as near the eastern borders of the Kaliningrad region. Remotely piloted vehicles travel along standard routes over the neutral waters of the Baltic and Black Seas, and are also stable in the airspace of Poland, Ukraine and the Baltic countries.

For example, the RQ-4B-40 Globach Hawk drones are responsible for monitoring the situation in the South-East of Ukraine - they regularly fly along the line of demarcation of the conflicting parties, and over the past months have been on daily duty near the Crimean peninsula. 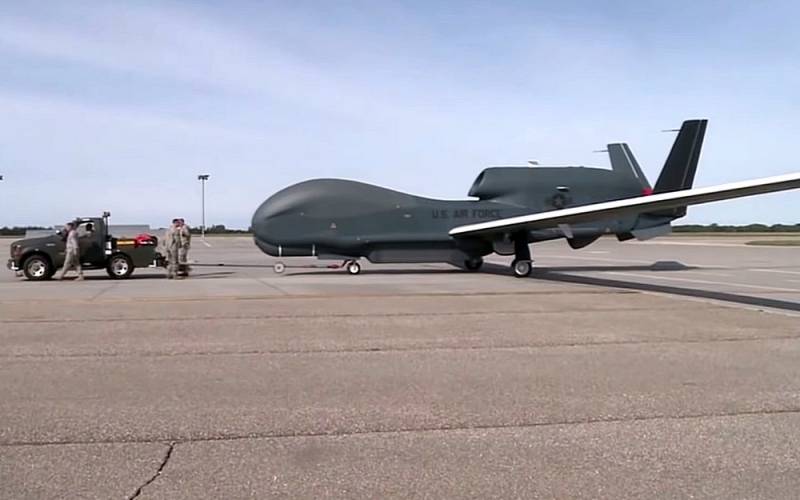 It is noteworthy that the American Global Hawk UAVs are sent for reconnaissance operations from the NATO Sigonella airbase on the island of Sicily.

The US Air Force's Boeing RC-135V Rivet Joint electronic reconnaissance aircraft, in turn, also conduct regular overflights of the Crimea and the Kaliningrad region - in turn, they usually start on patrols from airfields located in Crete, or from the already mentioned Mildenhall airbase in the UK ... 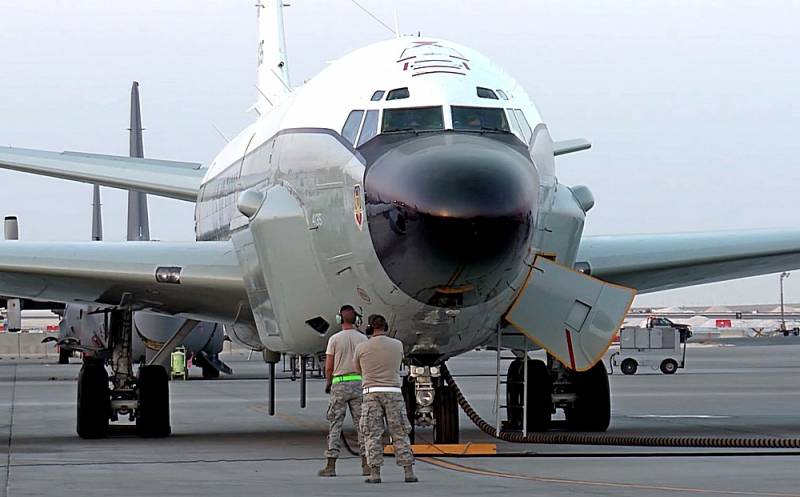 Particular attention is paid to the Russian fleet - US Navy Boeing P-8A Poseidon anti-submarine aircraft constantly monitor our Navy, accompanying ships passing through the North Sea - they take off from Lossiemouth airbase, located in Scotland.

This directly brings us to the issues of the need to ensure the activities of such a solid air fleet, which, among other things, starts operations from remote airfields - for constant monitoring of the situation, reconnaissance officers need large volumes of aviation fuel.

It is for this purpose that the United States is deploying so many formations of tanker aircraft, which, of course, is an extremely unpleasant factor for the security of Russia - with the increase in the number of air tankers, it is possible to predict a sharp increase in the number of reconnaissance flights of the NATO bloc countries, which are no longer constrained by any logistical restrictions.
Ctrl Enter
Noticed oshЫbku Highlight text and press. Ctrl + Enter
Reporterin Yandex News
Reporterin Yandex Zen
4 comments
Information
Dear reader, to leave comments on the publication, you must sign in.