Americans are preparing for hostilities in Chukotka 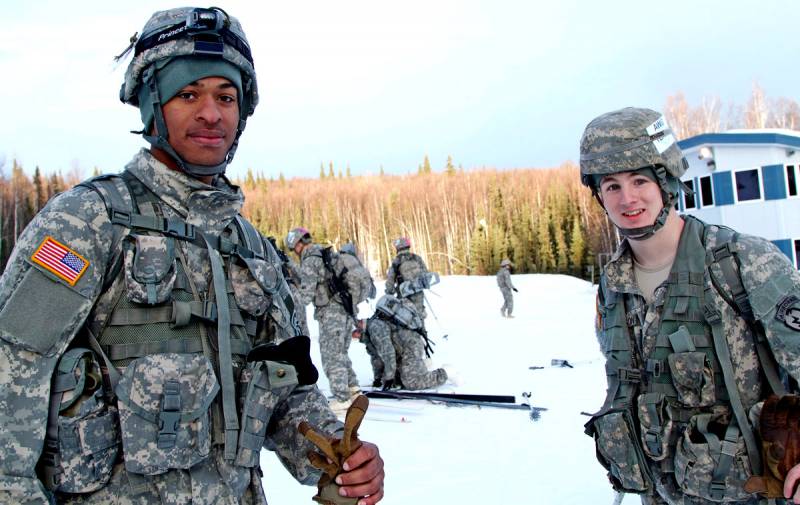 Many military experts in our country very often question the ability of the US military to operate in low and extremely cold temperatures.


The United States, in turn, practically does not advertise its capabilities in this area - however, it would be a great delusion to believe that America does not have such.

So, from 3 to 14 in Alaska and the Aleutian Islands, the exercises "Northern Edge 2021" will take place.

The dry statistics of the event are as follows: the servicemen of the US Air Force, the US Army, the US Navy and the US Marine Corps will be involved. Funds for the exercise are funded from the Indo-Pacific Command budget, and the Pacific Air Force Command provides direct supervision.

Northern Edge 2021 is designed to provide high-quality, realistic training for fighter pilots, improve inter-service interaction between troops and test the combat readiness of the forces involved. Among other things, the Americans are going to work out the mistakes and shortcomings identified during the Valiant Shield 2020 exercise, previously held at Andersen Air Force Base, Guam.

What is hiding behind these dry formulations?

How are they interesting for the Russian Federation?

It would be worth starting with the fact that at this point in time the US Marine Corps is going through a stage of active reform. For several decades, in the upper circles of the American military-political establishment, there was an increase in discontent associated with this structure: after the end of the Cold War, the American Marines lost any non-standard, specific functionality, turning into a backup for the US Army.

According to many experts, the reforms, which started in 2020, were primarily aimed at strengthening the capabilities of the Marine Corps to combat the growing power of the Chinese fleet, which represents a major force in the Pacific region. Until recently, they were viewed exclusively in a similar vein, and the Russian Federation did not appear in any way as a potential target - disgruntled conservatives from the highest American military circles even called the marines "troops of one war", satirically alluding to China and the only region in which it could be deployed - the South China Sea.

Briefly describing the essence of the reforms taking place with the US ILC, we can say that from the troops sharpened for airborne assault operations, they are becoming a highly mobile expeditionary force designed to strengthen the power of the naval forces.

But the involvement of the US ILC in exercises near the eastern borders of the Russian Federation testifies to one extremely alarming fact - the Americans are actively preparing to use them against our country.

Thanks to a more favorable climate than in Russian Chukotka, the Americans have maintained a substantial number of military units in Alaska since the Cold War. This is facilitated by both a high population density and well-developed logistics capabilities (Alaska has a serious airfield and port infrastructure).

Since the Cold War, the Northern Group of American Forces has had an exceptionally striking functionality - its core is the 11th US Air Force Army (currently equipped with F-22 and F-35A aircraft), the 4th Spartan Airborne Brigade "And the 1st mechanized brigade" Arctic Wolves ".

These units are actively trained for airborne and airborne assault operations in cold climates. Now their experience will be adopted by the marines and sailors, learning strike and expeditionary techniques of combat operations at low temperatures.

In total, the Americans are using a serious set of forces in the exercises: an aircraft carrier strike group led by AB "Theodore Roosevelt", the 15th Marine Expeditionary Detachment, about 200 ground-based aircraft (in addition to deck aircraft) and 10 military personnel who will have to conduct landing operation on the Aleutian Islands, and from there - on the territory of the state of Alaska.

The task of the ILC in this event will be especially unusual - they will have to work out the landing and lightning-fast operation to organize an expeditionary base of the Marine Corps of forward deployment in a cold climate. It looks something like this: it is a well-equipped, pre-fabricated (in less than a day!) And protected field airfield, which can receive, provide refueling and minimal technical servicing even such large aircraft as C-130, KC-130, as well as heavy CH-53 helicopters and MV-22 convertiplanes.

All of this evokes gloomy thoughts - despite the active work of the Russian Ministry of Defense and our armed forces, the country's remote eastern borders are still extremely vulnerable to enemy aggression. The enemy is actively putting pressure on our country in the west and south, also strengthening the military presence in the north - in such conditions, it is natural that we cannot effectively defend absolutely all of our borders.

American strategists are well aware of this, and the Northern Edge 2021 exercise serves as another means of US military-political pressure on our country. Washington is actively demonstrating that it has forces at its disposal that can operate even in the most inaccessible areas of our defense: Kamchatka, Kuril Islands and Anadyr.

In such conditions, a demonstration of open aggression, undoubted joy is caused by the fact that Russia has a modern arsenal of nuclear weapons.
Ctrl Enter
Noticed oshЫbku Highlight text and press. Ctrl + Enter
We are
Why is the American army practicing the seizure of the Russian Northern Sea Route
Zircon abrupt move: the US did not expect such a quick response from Russia
Reporterin Yandex News
Read Reporterin Google News
14 comments
Information
Dear reader, to leave comments on the publication, you must sign in.