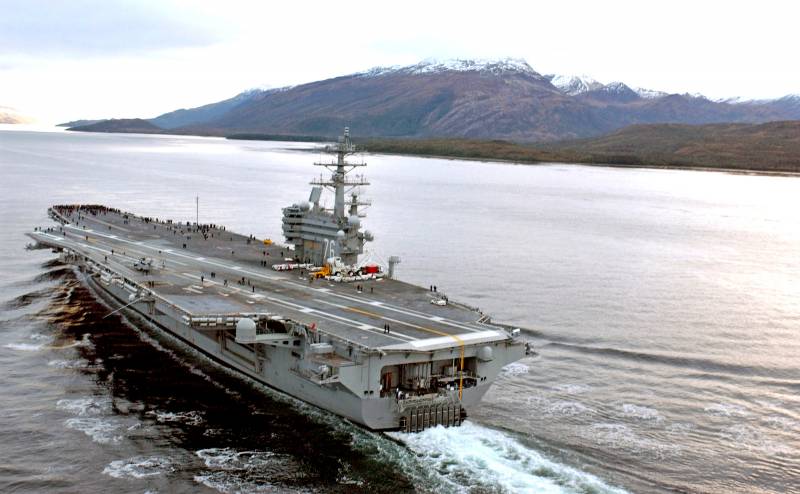 The United States and NATO continue to actively prepare for an armed conflict with Russia. Judging by the location of the military exercises conducted by them, it is already possible to determine the most likely points of the first strike. In addition to the Kaliningrad region, it appears that the Pentagon's primary targets will be our entry points to the Northern Sea Route in the Arctic.


In order not to be unfounded, here are a few facts. At present, the largest NATO maneuvers in the last 30 years are being prepared in Europe, in which more than 30 thousand servicemen, armored vehicles and aircraft will be involved. It is not particularly concealed that in this way the North Atlantic Alliance is practicing its readiness for war with Russia on its western borders, primarily against our exclave, the Kaliningrad region. True, the exercises "Defender Europe 2021" can be used as a convenient background for an attempt at military revenge of the Armed Forces of Ukraine in Donbass, which we are talking about in detail. told earlier. In this case, NATO will act as the "roof" of Kiev, which can quickly transfer its troops to the territory of Ukraine in order to stop the counter-offensive of the Russian army.

In addition, the US Air Force some time ago transferred a squadron of four B1 Lancer strategic missile bombers to Norway, and is also preparing to use the territory of this Scandinavian kingdom for the deployment of its multipurpose nuclear submarines. Obviously, in this way the Pentagon is targeting our Northern Fleet and the western entrance to the Russian part of the Arctic. And now it was the turn of the eastern flank.

A massive US military exercise called Northern Edge 2021 is scheduled in Alaska this May. More than 15 American troops will take part in them, mainly from the Marine Corps, the most mobile branch of the US military. Also in the maneuvers will be involved the nuclear aircraft carrier Theodore Roosevelt with its air wing and aircraft of the 11th Air Army, stationed at two bases in Alaska. In total, over 240 aircraft and drones will take part in the exercise: stealth fighters F-22 and F-35, bombers, reconnaissance aircraft, tanker aircraft, AWACS aircraft, military transport aircraft, strike and reconnaissance UAVs. This is a huge force concentrated in one place, where there are no other potential adversaries besides Russia.

It is curious how the Pentagon comments on future exercises. Lt. Col. Mike Boyer of the US Air Force Pacific Command stated literally the following:

Northern Edge will allow different types of troops to piece the puzzle together to see the big picture, as well as give our younger generation in the Armed Forces a sense of what the future conflict might look like in all its complexity.
Pay attention to the wording: not “possible”, but “future conflict”. Everything is already said in plain text. But what specific tasks can the American AUG and the 11th Air Force from Alaska try to solve?

It should be borne in mind that the northeast of Russia is one of the most sparsely populated and most difficult regions of the country to defend. After the collapse of the USSR, the 99th motorized rifle division with an incomplete staff was on duty there, but in 1996 only a military storage base was left from it. equipment, and in 2001 it was completely disbanded. The restoration of the infrastructure of the Ministry of Defense of the Russian Federation in Chukotka began only in the last few years. Near Anadyr, a runway was reconstructed, capable of receiving long-range Tu-22M3 bombers and strategic Tu-160. A link of MiG-31BM supersonic fighter-interceptors was also transferred there. The first regiment of the future Coast Guard division was recreated, equipped with snowmobiles for maximum mobility. The Ball and Bastion missile systems are responsible for the anti-ship defense of Chukotka. Aerial reconnaissance is conducted by the Forpost and Orlan UAVs.

In general, the trend towards the restoration of the combat capabilities of the Russian army is evident. However, can this relatively small contingent be able to withstand the attack of 240 aircraft and attack UAVs? What if the US Navy AUG blocks the exit from the Northern Sea Route, the US Air Force launches a massive airstrike against our military infrastructure in Chukotka, and then the Marine Corps lands there? As a matter of fact, something similar will be practiced in the exercises "Northern Edge-2021". And if this happens simultaneously with the attack on Kaliningrad and the blockade of the Northern Sea Route from the western direction?

The only real deterrent here will be only the threat of Moscow's use of nuclear weapons. But what if Washington timing the aggression in such a way, when there will be some Troubles in Russia, and there is no one who is ready to give the order to start a nuclear war with such a superpower as the United States of America? I really would not like this.
Ctrl Enter
Noticed oshЫbku Highlight text and press. Ctrl + Enter
We are
Major NATO exercises as a reason to recapture Donbass
"We must beat first": the geopolitical alignment around Russia is continuously deteriorating
Reporterin Yandex News
Read Reporterin Google News
6 comments
Information
Dear reader, to leave comments on the publication, you must sign in.