Major NATO exercises as a reason to recapture Donbass 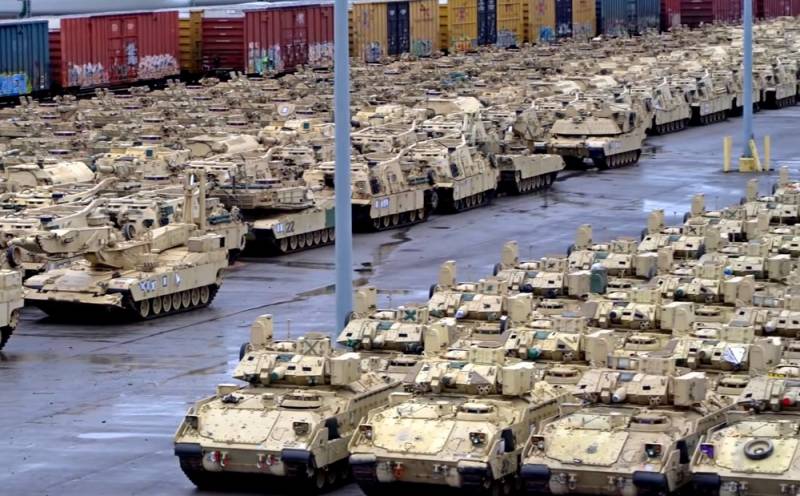 Despite the fact that a large-scale offensive of the Armed Forces of Ukraine in Donbass did not take place, and Russia avoided the need to engage in direct hostilities against Ukraine, it is still too early to exhale. Russian Defense Minister Sergei Shoigu gave the order to begin the withdrawal of troops to the places of permanent deployment, but a significant part of the combat equipment and remained near the western border at the training ground near Voronezh. It is stated that there she will await the start of the joint Russian-Belarusian exercises "West-2021", which will be held in September. However, the point is clearly not only in these maneuvers.


What should precede the start of full-scale hostilities? That's right, the transfer and deployment of troops. In our age of digital technologies and satellite surveillance, it is simply impossible to do this covertly. The only "legitimate" way to do this is to conduct exercises, under which the redeployment of the armed forces is carried out. It is desirable that the maneuvers take place somewhere near a potential theater of military operations. It is for this reason that the movements and preparations that have been conducted by the Russian army and navy in the immediate vicinity of the Ukrainian borders in recent months have been watched with such concern in Ukraine and at NATO headquarters. It is believed that it was this that cooled the warlike ardor of Kiev, forcing it to slow down the militarist momentum, and there really is a great deal of truth in this.

The problem for us is that the North Atlantic Alliance also conducts military exercises with enviable regularity, and the largest in the past 30 years, called Defender Europe 2021, is scheduled for the near future, from May to June. In total, more than 30 thousand servicemen from 26 countries will be involved in them. NATO maneuvers will take place on the territory of 13 European states, and four airborne operations will be carried out in Estonia, Romania and Bulgaria. The exercise is officially declared defensive. However, a certain Aleksey Arestovich, a representative of Ukraine in the trilateral commission on Donbass, called things by their proper names:

Defender Europe 2021 translates as “defend Europe”. Well, let's put it bluntly - the war with Russia, the topic of armed confrontation, is being worked out.
Thank you for avoiding unnecessary hypocrisy. So, NATO's war with Russia, but what kind?

It is generally accepted that the main goal of the North Atlantic Alliance in the event of an armed conflict with our country will be the Kaliningrad region, which it will have to neutralize in the first place. It seems that there is even a plan: to take it into the blockade "for starvation" or to destroy the exclave's air defense system and other infrastructure of the RF Ministry of Defense with cruise missiles and aviation, and then crush it with tanks. But at the same time, important nuances are ignored.

At first, to carry out such an operation with active opposition from Russia, NATO will need forces of a completely different order, which are assembled in the "Defender Europe 2021" format. We need not tens, but hundreds of thousands of servicemen. At the same time, there will definitely be opposition: the Russian Aerospace Forces will launch air strikes, and the Baltic Fleet and the Iskander-M missile system will begin to hit command posts, communication centers, air defense systems, ammunition and fuel depots, and so on with missiles. The Russian army will break through to the Kaliningrad region through the Suwalki corridor from the territory of Belarus. An easy walk for the Western military is clearly not foreseen.

Secondly, for some reason, it is completely ignored that Moscow has every right, in accordance with its military doctrine, to use nuclear weapons. First, it will be a tactical nuclear strike "for escalation for the purpose of de-escalation." Then - according to the situation.

Based on this, NATO's war with Russia for Kaliningrad is only hypothetically classified as possible. Does this mean Defender Europe 2021 can be taken lightly?

Not. The fact is that at present they can become the background for the renewal of Ukrainian aggression against Donbass. Recall that Kiev has already passed a law legalizing the entry of foreign troops into its territory. In late spring and early summer, a NATO contingent of over 30 people will be deployed in Eastern Europe. As a possible retaliatory measure on the part of Moscow to the large-scale offensive of the Armed Forces of Ukraine on the DPR and LPR, an option was considered with a Russian counteroffensive deep into Ukrainian territory: to Odessa, mainland Taurida and even towards Kiev. Will the Armed Forces of Ukraine be able to stop the Armed Forces of the Russian Federation? Hardly.

However, a deployed contingent of the North Atlantic Alliance with all armored vehicles and combat aircraft will be located nearby. What will prevent NATO from quickly transferring its troops to Kiev or Odessa, blocking the road of the Russian army? Never mind. This means that for the period of the military exercises "Defender Europe 2021" the likelihood of provocations by the Armed Forces of Ukraine against the unrecognized republics of Donbass significantly increases.
Reporterin Yandex News
Reporterin Yandex Zen
15 comments
Information
Dear reader, to leave comments on the publication, you must sign in.