How Russia will play on the deterioration of US-Turkish relations 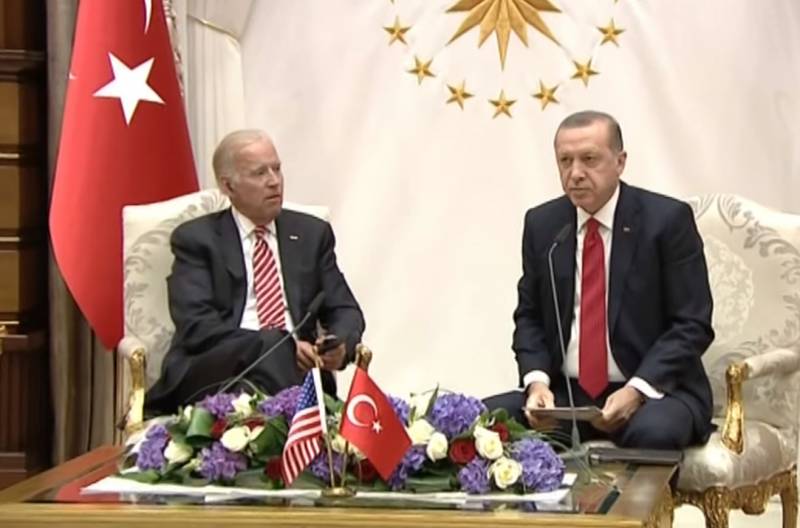 The day before, President Joe Biden took an important step towards his strategic NATO ally, Turkey. At the level of the White House, the United States finally recognized the fact of the genocide of the Armenian people by the Ottoman Empire at the beginning of the last century. The move is strong and, to put it mildly, unfriendly. How will relations between Washington and Ankara change now, and will the Kremlin now be able to win over the disgraced "Sultan" Erdogan to its side?


The historical truth, inconvenient for Turkey, is that since 1915, almost half of the 2,5 million Armenian population has been destroyed on its territory. Deportations, concentration camps, pogroms and just massacres - all this happened. Orthodox Greeks-Pontians and Christians-Assyrians also suffered from Turkish repression. By the way, speaking of historical responsibility, it is worth mentioning that all this happened in front of the British and French, and for some reason the enlightened Europeans did not try to prevent or stop the massacre. The fact of genocide is officially recognized by three dozen countries, including Russia, as well as by almost all American states, but not at the federal level. Turkey's position is that there was no genocide, and the scale of the repression was greatly exaggerated. For Ankara, this is an extremely painful topic, since in the future it may face the question of paying compensation to the millions of descendants of victims, as well as restitution of property. So why did the most "democratic" President Joe Biden aggravate relations with his most important ally in the North Atlantic Alliance?

Apparently, Washington wanted to kill several birds with one stone.

At first, "Globalists" in the person of the Democratic Party are beginning to actively revise the "legacy of Trump." During the 4-year rule of the Republican President, the United States carried out policies isolationism, focusing on solving internal problems. For some reason, many considered it America's weakness and tried to take advantage of the opening window of opportunity. President Erdogan has been the most successful at this. Under him, Turkey actually cut off part of its northern territories from Syria and came to Libya, where the Government of National Accord Faiz Saraj made great concessions on the issue of revising the boundaries of the continental shelf in exchange for military support for Tripoli. Turkish warships "chase" Greek ships in the Eastern Mediterranean and are openly insolent to the French allies in the NATO bloc. Ankara also helped Baku to resolve the issue of Nagorno-Karabakh by military force, receiving in return a land corridor to the Caspian Sea and access to Central Asia.

With all this, the Azerbaijanis and Turks did without the advice and help of the Americans, which, apparently, was the last straw. The fact is that "Sultan" Erdogan is promoting his own integration project of Great Turan with the united army of the Turkic-speaking countries. Taken together, this could become a kind of "logistic superpower" standing on the Middle Corridor of the "New Silk Road", along which transit cargo flows will go from China to Europe. On the basis of this economic union of the Central Asian countries, led by Turkey, in the future, a kind of regional semblance of NATO may be formed. Needless to say that such independent infrastructure projects for cooperation with China, which are being promoted bypassing the United States, are completely unnecessary for Washington? Recognizing the fact of the Armenian genocide, the White House issued a warning to Turkey, which is playing for independence, and its potential partners.

Secondly, this step can be fully regarded as a "black mark" for President Erdogan personally. Too much "sultan" became independent, trying to create a new macro-regional militaryeconomic unification without the knowledge of Washington. Recall that the main political opponent of the Turkish president, preacher Gulen, who is considered the organizer and inspirer of the failed coup attempt a few years ago, is hiding in the United States. Having officially recognized the fact of the Armenian genocide during the reign of Recep Erdogan, the White House makes it clear to the Turkish elites that there is a certain cause-and-effect relationship. And this may only be the beginning.

Thirdly, with the same single shot, Washington hit Russia, or rather, its interests in the Transcaucasus. At present, relations between Yerevan and Moscow are not in the best condition after the military defeat of Armenia in Nagorno-Karabakh. The Kremlin, under a plausible pretext, avoided direct assistance to its ally in the CSTO, which led to the inevitable defeat of the unrecognized republic against the alliance of Azerbaijan and Turkey. The long-term consequences of this event have yet to be grasped, but the United States acted ahead of the curve, effectively taking the side of the losing Armenia. The disgraced Prime Minister Nikol Pashinyan, who has a pronounced pro-Western position, will now be able to use the recognition of the Armenian genocide to his advantage in the ongoing political struggle for power.

Now the question must be asked whether Russia will be able to benefit from the deterioration of US-Turkish relations. For example, wait for the withdrawal of the US Air Force from Incirlik airbase, or even for Turkey to leave NATO? The Turkish Foreign Ministry commented on Joe Biden's decision as follows:

This statement by the United States, which distorts historical facts, will never be accepted by the Turkish people and will open a deep wound that will damage our mutual trust and friendship.
The answer is rather negative. Ankara is too dependent on the United States and the collective West, in general, in terms of economic, technological and military cooperation. The Turks cannot even make their own "national tank" on their own, and their vaunted "Bayraktars" are assembled from imported components. The Turkish elite is predominantly secular and trained in the West, with which it is closely associated. The severing of relations with the United States and its allies and the expulsion of the American military will have extremely serious consequences for Ankara.

In fact, what are the alternatives? Integration of Turkey with the Eurasian Economic Union or with China? This sounds good only in words, but in reality it will result in tough sectoral sanctions and restriction of Turkish companies' access to Western markets. Lyra has already sagged, and restrictive measures will lead to the fact that she will finally "break through the bottom" with all the ensuing consequences in the form of socio-economic tension in society. But these are not all the problems that will loom then on the horizon. For example, the United States can step up support for the Kurds not only at the borders, but also in Turkey itself, which will call into question its territorial integrity.

In general, it is not Senka's hat to compete with President Erdogan with Washington. "Sultan" is daring, but small.
Ctrl Enter
Noticed oshЫbku Highlight text and press. Ctrl + Enter
Reporterin Yandex News
Reporterin Yandex Zen
8 comments
Information
Dear reader, to leave comments on the publication, you must sign in.